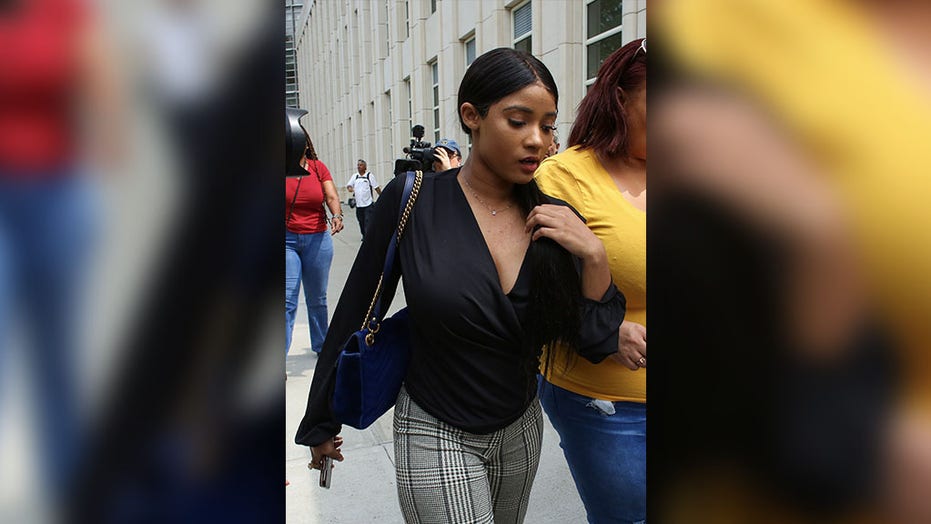 Jocelyn Savage, who is one of R. Kelly's girlfriends and has been living with him since she was 19 years old, has spoken out on social media for the first time in two years.

The aspiring singer, now 24, posted a series of images on Instagram promoting her side of the story. She is working with Patreon, a subscription-based content service, "where I will post daily chapters of my story."

"Things I am going to reveal that was sweared not to see the day of light — by NDA. I am risking my life for many others. ‪This story is 18+ and only for mature audience, I want to make sure my story is very detailed as I can remember. My first story 'Where It All Started' is out now," she continued.

According to The Daily Beast, she posted the first story on Saturday (which is behind a paywall) and revealed how she met Kelly (whose real name is Robert Kelly) in 2015 at one of his concerts.

R. Kelly's girlfriend, Jocelyn Savage (L), leaves after a hearing in the racketeering and sex trafficking case of Kelly at Brooklyn federal court on August 2, 2019 in New York. - R&amp;B singer R. Kelly pleaded not guilty in a New York court to federal charges including racketeering that allege he systematically recruited girls for sex while touring.  (KENA BETANCUR/AFP via Getty Images)

She was 17 at the time and recalled it being “fun experience," but she had "very mixed emotions.”

The 52-year-old disgraced R&B singer, who is currently battling multiple sex crime charges in New York and Chicago, promised to help with Savage's music career so she dropped out of the college and moved in with him but that's when he started to change.

“After these couple of months Robert started giving me commands, and making sure I call him by certain names. Like ‘Master’ or ‘Daddy’ which I didn’t really care for at the time, ” Savage wrote, per The Daily Beast.

“If I wasn’t getting paid or pursuing my dream I would’ve went home, but all of that didn’t stop just yet. But It started getting worse by day by day, he would raise his voice at me if I didn’t call him by those two names. If Robert called me I would have to reply with ‘Yes, daddy’ or ‘Please daddy’ he was so controlling.”

In this Sept. 17, 2019 file photo, R. Kelly appears during a hearing at the Leighton Criminal Courthouse in Chicago. (Antonio Perez/ via AP Pool, File)

Savage also wrote how Kelly would make threats that he wouldn't help her anymore if she spoke out about, left his house, or spoke to her parents.

“He would always would say ‘All this can stop today, you want a career? Or do you want to live a normal life’ basically trying to make me do what he wants,” she wrote.

Savage previously supported Kelly and attended his court hearings along with his other live-in girlfriend Azriel Clary, 21.

She told Gayle King in a tell-all "CBS This Morning" interview in March that claims she's been brainwashed by Kelly are untrue and that her family is "basically out here just to get money."

"CBS This Morning" co-host Gayle King (L) interviews two women -- Azriel Clary (in black) and Jocelyn Savage (in red) who say they are in a relationship with R. Kelly. (CBS)

In October, a federal judge in New York City denied him bail after prosecutors said freeing the singer created a risk of him fleeing or tampering with witnesses in the sex abuse case against him.