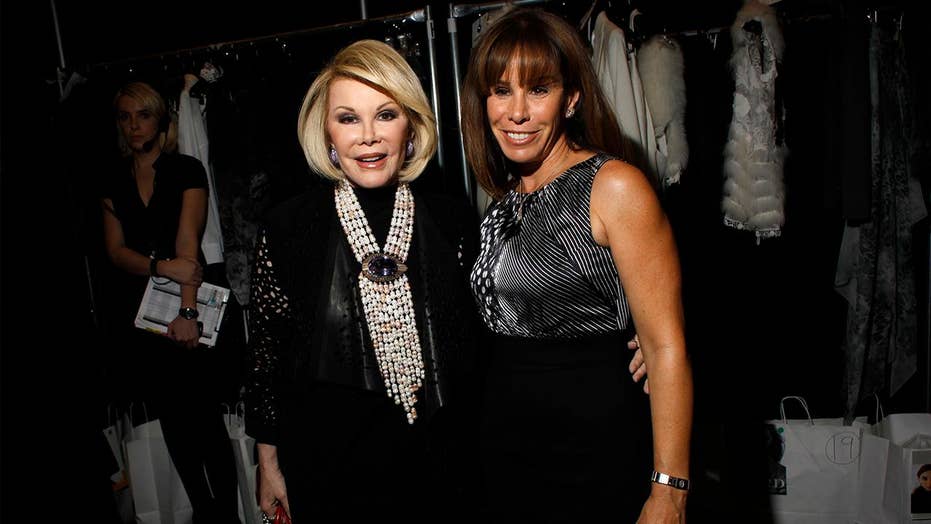 After Melissa Rivers sold her mother Joan Rivers’ penthouse in 2015, she had to go through the late star's belongings, which resulted in exploring a treasure trove of jokes, letters, newspaper clipping and even receipts she collected throughout her lifetime.

While the 49-year-old TV host and producer was all too familiar with Joan’s mountainous collection, which reportedly included filing cabinets with 69,000 quips to ensure she never repeated a line, Melissa wasn’t expecting to share them with the world.

With enough convincing, Melissa, along with Joan’s friend and publicist Scott Currie, chose to share those rarely-seen archives in a coffee table book, titled “Joan Rivers: Confidential,” which was released earlier this year. It’s a loving homage to the raspy voiced, razor-sharp comedian who died in 2014 at the age of 81.

“We were having to go through everything in her apartment and start to close the whole thing after I sold it,” Melissa recalled to Fox News. “There was so much stuff in storage. My parents were these incredible record keepers. They also had files and scrapbooks.

When asked if going through her mother’s belongings helped her cope with the loss, Melissa joked, “I’m not sure the book helped me cope, but it certainly helped get my storage bills under control.”

While Melissa wasn’t surprised by the discovery, as it was far from a family secret, fans will be shocked to learn that Joan, who was recognized as one of America’s most successful female stand-up comics, originally dreamed of a different role for herself.

“Well, she wanted to be a very serious actress,” said Melissa. “My grandfather was very funny. And my mother was always funny. And her sister was funny. Apparently, her mother was just very formal and not terribly funny. But they definitely had my grandfather, her father’s sense of humor. And they would always just be laughing. That was such an innate, comfortable space for her that eventually, that’s just where she landed. But the big thing was that she was going to be a serious, dramatic actress.”

However, the change in career plans worked for the brassy Brooklyn native. Her no-nonsense approach to comedy left millions of viewers in stitches. And no one in Hollywood was off-limits, not even the queen of glamour. Joan’s files revealed there were about 850 jokes dedicated to Elizabeth Taylor alone.

“Elizabeth Taylor became a favorite because, you gotta remember, women of my mother’s generation, they all wanted to be her,” said Melissa. “Every girl wanted to be ‘National Velvet.’ Every little girl wanted to grow up and be beautiful and glamorous — and the diamonds and the men fighting over her. This was their fantasy... And I think that’s where that all began.”

While many of Joan’s one-liners focused on Taylor’s weight gain over the years, the Oscar-winner didn’t seemed bothered by the seemingly vicious commentary. When mutual friend Roddy McDowall approached Taylor about Joan’s comedy, she gave a shocking answer.

“…The message that came back to my mom was ‘It doesn’t hurt me where I live,’” said Melissa. “Which is a pretty incredible answer. And as we saw the things that she did later in life, you get that. She always knew who she was, regardless of everything that was swirling around her."

And while some of Joan’s infamous jokes could have easily offended her targets, Melissa insisted she was never out to hurt anyone. And if Joan was aware that any of her subjects or their families were genuinely upset by her puns, she would immediately remove them from her act.

“You look at the bulk of the material, and I would say a good 98 percent is self-deprecating with her as the butt of the joke,” said Melissa. “Everyone used to ask if it would upset my dad (TV producer Edgar Rosenberg) that she made so many jokes about my dad. And my mom would always say, ‘You aren’t listening carefully. The jokes aren’t about Edgar. The jokes are about me!’… It was making fun of herself… She was never intent on hurting anyone.”

But Joan easily gained both fame and famous fans, including former President Ronald Reagan and Prince Charles. Melissa explained humor was the reason behind their lasting friendships.

“President Reagan was funny,” said Melissa. “You forget, he was an actor and a great storyteller… And my mother’s dear friend was Nancy Reagan. So that was a friendship that lasted through the years.

"The same with Prince Charles… He’s a big fan of comedy. And has a huge, hilarious sense of humor… A real friendship developed between my mother and Prince Charles and Camilla. … The bond was truly made through a mutual sense of humor… In private, the whole family has great, great humor.”

Joan earned a lasting career by mercilessly insulting nearly anyone, living or dead and happily criticizing the couture worn by celebrities on the red carpet. But when cameras stopped rolling, she made sure to keep every reminder that her comedy made someone laugh — especially when that praise came from the type of star she once dreamed of becoming.

“She never lost the feeling of being a fan,” said Melissa. “She would always save all her correspondences. My mother was just as excited to receive a letter from a Meryl Streep as you or I would be. And that translated so much on the red carpet. She never stopped being a fan.”