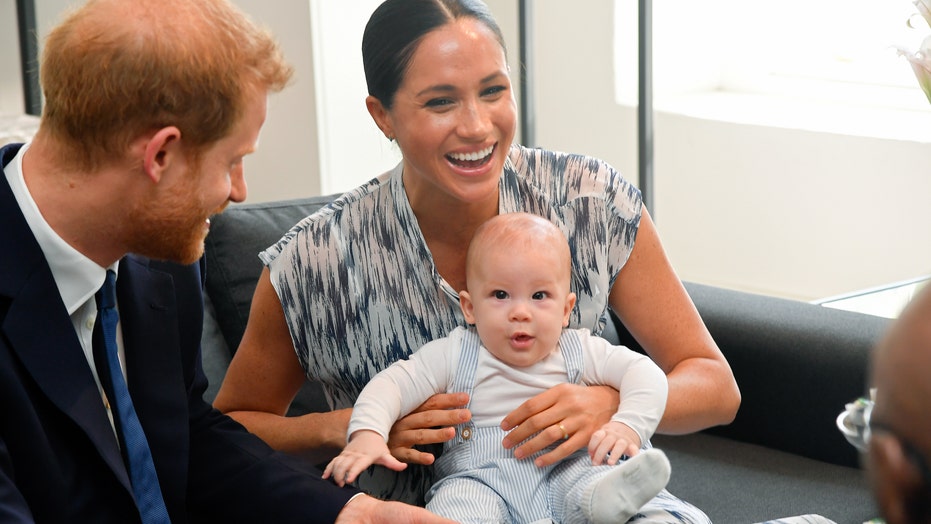 Archie Harrison Mountbatten-Windsor, the only son of Meghan Markle and Prince Harry, turns 1 on May 6 — and royal experts say his future is looking bright in the United States.

The couple, who announced on Jan. 8 they were stepping back as senior royals, are currently residing in the former American actress’ native Los Angeles.

“[The Duke and Duchess’] move to Meghan’s hometown of Los Angeles, with its thriving and vibrant multicultural environment, will offer Archie the chance in his most developmental years to experience a totally heterogeneous, multiracial population,” royal author Leslie Carroll told Fox News.

“Even if the Sussexes were to someday return to the U.K., or even reside in a Commonwealth country and resume their duties as full-time royals, the experiences that Archie will receive as a baby in America … and where he can regularly see other kids who resemble him, will be invaluable as he grows up,” she shared.

But unlike other royal babies, the public shouldn’t expect frequent photos of Archie as the family adapts to their new life in Los Angeles. Carroll shared that Markle, 38, and Harry, 35, have both stressed they’re eager to have a private, financially independent life. Consequently, they will be determined as parents to shield Archie from the glaring media spotlight.

She also pointed out that Harry, in particular, has never forgotten how the media hounded his mother, the late Princess Diana of Wales, and stalked his wife early in their relationship.

“If they were media hounds, they would have sold photos to Archie to every supermarket tabloid,” Carroll explained. “Obviously, this is not the case. And yet the couple has been criticized for being private and wanting to protect their infant’s private as well. … The couple has expressed a desire for low-key, relative anonymity for Archie.”

Royal historian and blogger Marlene Koenig also told Fox News she suspects Archie’s parents will take a no-nonsense approach when it comes to his safety in America.

In this image made available by SussexRoyal on Wednesday, May 8, 2019, Britain's Prince Harry and Meghan, Duchess of Sussex, joined by her mother Doria Ragland, show their new son to Queen Elizabeth II and Prince Philip at Windsor Castle, Windsor, England. Prince Harry and Meghan have named their son Archie Harrison Mountbatten-Windsor. (Chris Allerton/SussexRoyal via AP)

“If Harry and Meghan remain here, I assume that Archie will go to a private school in the U.S, probably not boarding,” she said. “It will be a school that provides for his security as well.”

Carroll believed Los Angeles is an ideal place for Archie’s upbringing, in comparison to the U.K., as it will offer a more normal upbringing than Kensington Palace, or even Frogmore Cottage, which is located on the grounds of Windsor Castle.

“Life in America will provide Archie with a much greater understanding of his mother’s culture and background, plus what the real world — where people who don’t live in castles with a retinue of servants and have thousands of acres of deer park as their backyards — live,” she explained. “Sure, it’s lovely if you can get it, but only a handful of people actually live that way.”

“Unlike other royal babies, Archie is likely to grow up hearing several different languages, including Spanish, a variety of ethnic musical styles everywhere he goes, and if he’s anything like the American women in his life — Meghan Markle and [grandmother] Doria [Ragland] — and even like the English grandmother he will sadly never know — he will be raised from the star to learn about the less fortunate around him and to open his heart and hands to them.”

Still, Koenig hopes that while the family is living across the pond, Harry will lead by example and maintain a positive relationship with the other royals.

“I hope that Harry, especially, will make sure that his son is aware of his heritage, especially when Charles succeeds to the throne and becomes Grandpa King,” she said.

At the time of Archie’s birth, royal commentator Victoria Arbiter told Fox News it’s very likely the couple wanted their son to have a sense of independence that does not come with carrying a royal title.

“He’s going to be simply known as Master Archie Harrison Mountbatten-Windsor,” she explained. “That gives him a greater chance of a normal life. Who knows what the future holds because one day his grandfather will be king. But it just takes the pressure off. There’s not so much expectation. He gets to be normal.”

Britain's Prince Harry and Meghan, Duchess of Sussex, during a photocall with their newborn son, in St George's Hall at Windsor Castle, Windsor, south England, Wednesday, May 8, 2019. (Dominic Lipinski/Pool via AP)

At the time, Koenig also shared that she wasn't surprised Archie wasn't given an official title.

“He’s going to have a life of privilege and certainly one of responsibility, but not in the same way as his cousin George and his siblings,” said Koenig. “He will have far more independence. [And Archie’s parents] are going to do their own thing within the context of what would be allowed.”