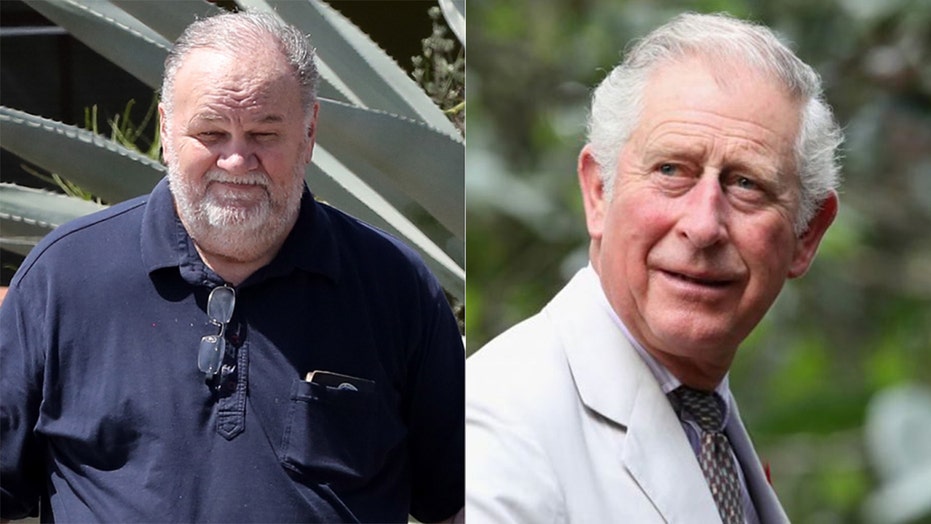 Meghan Markle's dad was noticeably absent from her royal wedding ceremony to Prince Harry after suffering a heart attack and undergoing surgery.

Now, in a new documentary, Thomas Markle, 75, is opening up about what it felt like to watch Prince Harry's father, Prince Charles, escort his daughter, now 38, down the aisle at the St. George's Chapel at Windsor Castle in England on May 19, 2018.

Meghan's father admitted he felt "jealous" as the Prince of Wales was linked arm-in-arm with his daughter moments before she and Harry tied the knot. It was something he said he "really wanted to do," he told the U.K.'s Channel 5 (via DailyMail).

Meghan Markle and Prince Harry's Megxit plan will be complete sometime in the spring of 2020. (AP)

"My daughter looked beautiful. I wish that I could have been there with her. I certainly appreciated Charles was there. I admit I cried a bit about that. To this day I can't forget that moment," Thomas said in the documentary, according to the DailyMail.

Thomas' ex-wife, Doria Ragland, was in attendance at Meghan's wedding. Meghan's father originally had planned to attend the nuptials and walk her down the aisle.

Meghan Markle's father told Channel 5 that she and Prince Harry "owe" him for the "trashy things" that have been said about him since their royal wedding.  (Toby Melville - Pool/Getty Images)

However, days before, Thomas secured a staged photoshoot with paparazzi, leading tensions to run high between him and the Duke and Duchess of Sussex. Thomas then suffered a heart attack and missed the ceremony due to surgery.

Channel 5's 90-minute documentary with Meghan's father comes weeks after she and Prince Harry announced their decision to "step back" as senior members of the royal family. The couple, with the queen and Buckingham Palace's support, will split their time between the U.K. and North America.

Harry was spotted arriving in Canada to reunite with Meghan and their son, Archie, 8 months, earlier this week.

Also in the documentary, Thomas blasted the royal family for being "stiffer" than Meghan's very own in America in addition to claiming that Harry and Meghan "owe" him for the "trashy things" that have been said about him.