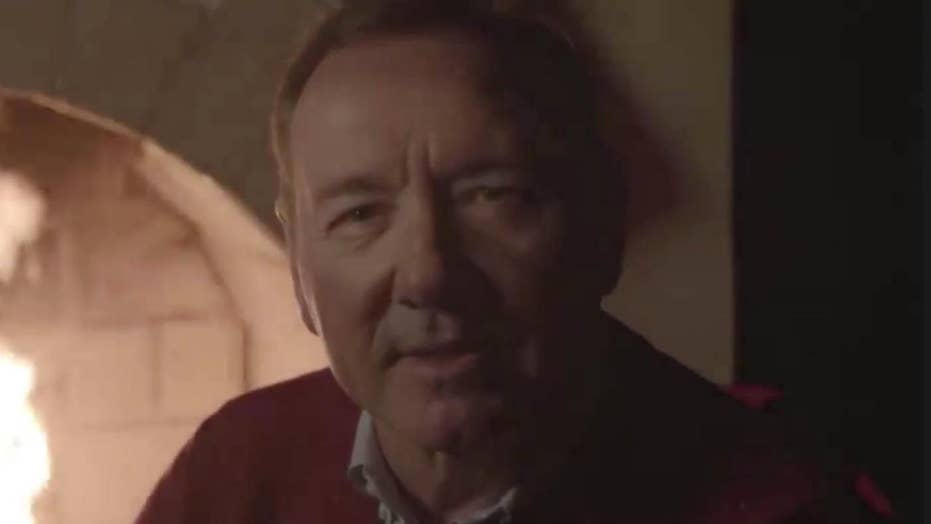 Disgraced actor Kevin Spacey, who has been accused by multiple men of sexual misconduct and assault, has posted another cryptic video as his 'House of Cards' character Frank Underwood.

Kevin Spacey returned to the Internet in a bizarre way.

The disgraced actor, 60, posted a cryptic video on his YouTube page Tuesday while in character as Frank Underwood from his former show "House of Cards."

"You didn’t really think I was going to miss the opportunity to wish you a Merry Christmas, did you?” Spacey says to the camera as he's crouching by the fire and stoking it, while in a Christmas sweater.

“It’s been a pretty good year, and I’m grateful to have my health back. And in light of that, I’ve made some changes in my life and I’d like to invite you to join me. As we walk into 2020, I want to cast my vote for… more good in this world. Ah yes, I know what you’re thinking. Can he be serious? I’m dead serious. And it’s not that hard, trust me,” he continued.

“The next time someone does something you don’t like, you can go on the attack — but you can also hold your fire and do the unexpected. You can kill them with kindness,” Spacey concluded.

This isn't the entertainer's first strange video. Last Christmas, he posted a video as Frank and indirectly responded to the sexual misconduct allegations made again him. “You trusted me even though you knew you shouldn’t... So we’re not done, no matter what anyone says. And besides, I know what you want. You want me back," he said.

And in August, he popped up in Rome and performed a poem at the National Roman Museum. The poem was about a worn-out and lonely boxer, left bleeding at ringside, cast aside despite previous glory.

Spacey read: "They used me for their entertainment, fed on shoddy stuff. Life was over in a moment."

“I shook the country, made the arenas vibrate, tore my opponents to shreds,” he continued. “I lit up the darkness, collected insults, compelled applause. Not everyone knew how to do this. None of you. On the other hand, life is not frightening for those who have never taken a risk.”

Back in October, the second case of sexual misconduct against Spacey was dropped because the accuser died.

Kevin Spacey attends a pretrial hearing at district court in Nantucket, Mass. The Oscar-winning actor is accused of groping the teenage son of a former Boston TV anchor in 2016 in the crowded bar at the Club Car in Nantucket.  (AP Photo/Steven Senne)

He was facing charges of sexual battery after the accuser, a massage therapist, referred to as John Doe in an anonymous suit filed in September 2018, claimed that the 60-year-old actor grabbed his hand to Spacey's private parts during a massage in 2016.

The alleged victim also said that the Oscar winner grabbed him by his shoulders in an attempt to kiss him and tried to fondle his genitals.

Another case, involving an 18-year-old man who claims he was groped by the "House of Cards" star at a bar in Nantucket in 2016, was dismissed by Massachusetts prosecutors after the accuser invoked his Fifth Amendment right not to testify about text messages from the night of the alleged groping that the defense claimed were deleted.

Spacey, who faces several other sexual misconduct accusations, was among the earliest and biggest names to be ensnared in the #MeToo movement against sexual assault and harassment that swept the entertainment and other industries.