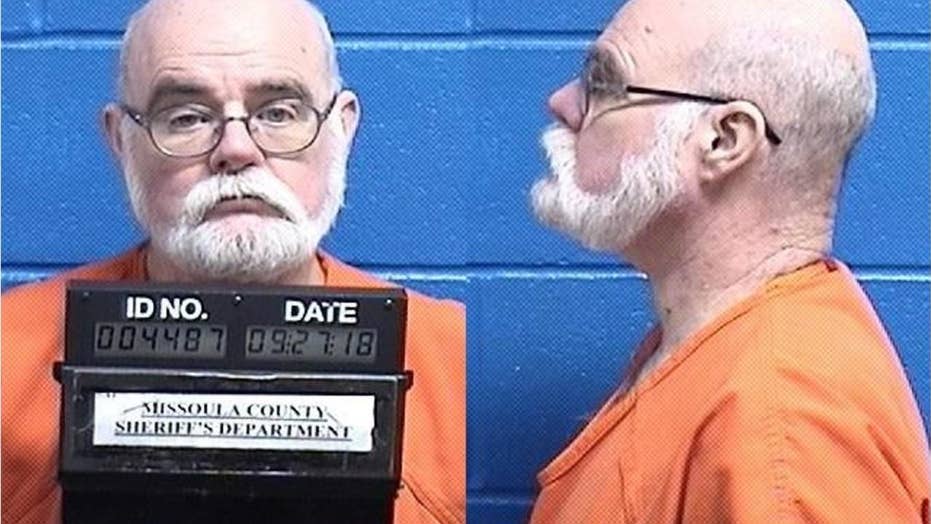 A former keyboardist for John Mellencamp was apprehended last year after being named the first-ever child pornography suspect placed on the FBI's Most Wanted list. At the time, he was on the run traveling across Montana by bus when another passenger noticed him viewing child pornography on his laptop screen.

When the bus pulled into Billings, the passenger confronted Eric Franklin Rosser, who had $20,000 taped to his legs, another $50,000 in his bag and $1,000 worth of marijuana, according to court records.

"Leave me alone. I know I have a problem," Rosser responded, according to the court files.

That July 2017 encounter led to Rosser's arrest and his guilty plea earlier this month in U.S. District Court on a charge of accessing the Internet with the intent to view child pornography. He faces a mandatory 10 years in prison when he is sentenced in January.

A previous child pornography conviction with ties to Thailand and Indiana could lead to a sentence of up to 20 years.

Rosser moved to the Yakima, Washington, area after his release from prison in January 2017, and he was to be under supervised release for three years.

Five months later, Rosser's probation officer petitioned for his arrest for violating the terms of his release. The motion said Rosser acknowledged viewing online videos of "Japanese girls who were younger than 18, young Russian girls doing gymnastics, that sort of thing."

Rosser told Montana officers that he emptied his bank accounts, wrote letters to his family and fled to avoid returning to prison.

In November, a federal judge in Washington sentenced him to two years in prison for violating his supervised release.

Bryan C. Tipp, Rosser's attorney in Missoula, did not return a phone call from the Associated Press Tuesday seeking comment. Prosecutors declined to comment as well..

An investigation into a child pornography ring in Indiana in the late 1990s led to Rosser's arrest in Thailand in 2000 on charges of lewd behavior and possession of pornographic materials.

At the time, Rosser was living in Bangkok, where he played piano at an upscale hotel and ran a music school from his home, giving lessons to children from prominent families.

The FBI said Rosser had produced a videotape of him sexually assaulting a pre-teen girl in Thailand.

"He provided a videotape of that to a man in Indiana in exchange for that man's homemade child pornography," said Steve DeBrota, who prosecuted the Indiana case and held it up as a great example of local, state, federal and international law enforcement cooperation.

"This was hand-to-hand exchange of materials between people," said Brad Swain, who helped investigate the case and is now sheriff of Monroe County, Indiana.

Shortly after his arrest, Rosser sent an email to newspapers in Bangkok admitting he was a pedophile and asserting there were "only four tapes containing sex acts with immature girls" which he made so he could re-live the experiences and not create more victims.

"Rosser was famous for understating what he actually did," DeBrota said. "But we have a very exact lens on how bad he was."

Rosser disappeared after posting bail, kicking off a worldwide manhunt and becoming the first child pornography suspect placed on the FBI's Most Wanted list.

Eric Franklin Rosser after his extradition order was issued in Bangkok, Thailand, on Aug. 19, 2002. (AP)

"I still have the (FBI) poster in my office," DeBrota said.

Rosser underwent plastic surgery and liposuction and used assumed names and fake passports to travel to Europe, Spain and France before taking a cruise ship back to Thailand, DeBrota said.

A tip led to Rosser's arrest in Thailand in 2001, and he was extradited to the U.S. the next year. The former Bloomington, Indiana, resident pleaded guilty in 2003 to child pornography and international conspiracy charges. He was sentenced to more than 16 years in prison, which was the longest sentence available at the time, DeBrota said.

"He was responsible for transferring child pornography produced in Indiana to another person who then digitized it and put it on the internet," victimizing several children, DeBrota said.