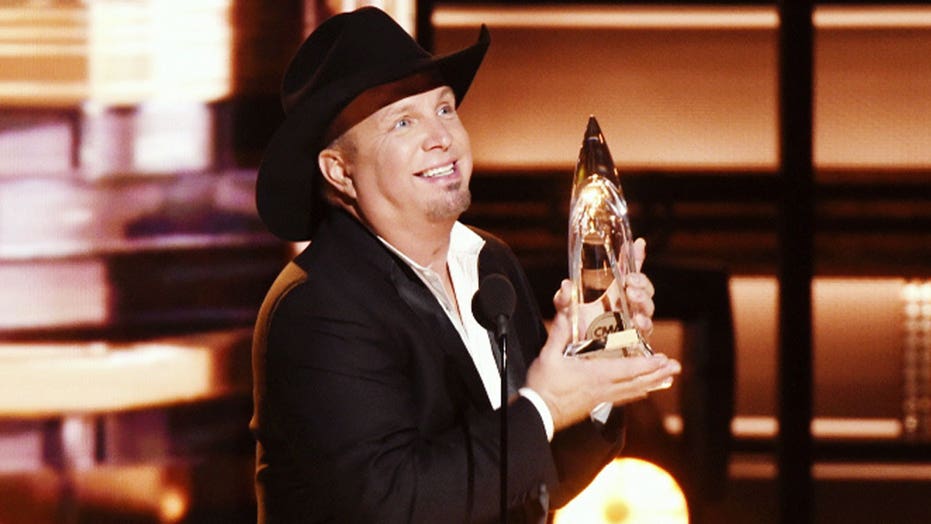 Country superstar is the CMA's 2016 Entertainer of the Year

Garth Brooks took the stage at the Kennedy Center Honors on Tuesday night to show off his singer-songwriter roots, delivering a gentle, sunny performance of James Taylor‘s classic, “Shower the People.”

Clad in a tuxedo and accompanied by a chorus, Brooks seemed completely at ease with the material, which is not surprising, since he has often named Tayor as one of his primary influences. Some of his own acoustic-based songs are really not that far off from Taylor, as he made apparent in a sensitive rendition of the beloved classic while an emotional Taylor looked on, beaming in appreciation. Brooks himself broke down briefly, choking up and wiping away tears at one point during the song.

Brooks actually got to collaborate with Taylor recently on his new Christmas album with wife Trisha Yearwood. Taylor appears on a track titled “What I’m Thankful For.”

“What a great artist,” Brooks raves to Taste of Country. “Why I got into music was James Taylor, so to see him be a real down-to-earth guy that’s unbelievably talented . . . then to hear him sing those lyrics of ‘What I’m Thankful For,’ which is a song Ms. Yearwood and I got to write together, that was definitely a highlight of my recording life.”

He recalls he was overwhelmed when he met his hero for the first time.

“I cried like a baby when I met him. VH1 did a show where they paired somebody with their hero,” he shares. “I got paired with mine and we did ‘Sweet Baby James’ and ‘The River.’ I wrote ‘The River’ practically trying to rip off every lick that James Taylor had, so it was neat to hear him sing those lyrics because that’s who inspired you to write them.”

South Carolina native Darius Rucker performed “Carolina in My Mind” at the ceremony, and Sheryl Crow gave an emotional rendition of “Fire & Rain.”

Vince Gill was also among the performers at the 39th annual Kennedy Center Honors, which honor the achievements of artists who have made an outstanding and lasting contribution to their field. He joined Ringo Starr, Bob Seger, Steve Vai and Kings of Leon for a rousing performance of the Eagles’ “Life in the Fast Lane.”

The Eagles were supposed to be honored in 2015, but postponed for a year due to Glenn Frey‘s health. Frey passed away in January 2016 at the age of 67.

Actor Al Pacino, gospel and blues legend Mavis Staples and Argentinian pianist Martha Argerich were also among the honorees at the 2016 Kennedy Center Honors, which taped on Dec. 4 and broadcast on Tuesday night on CBS.