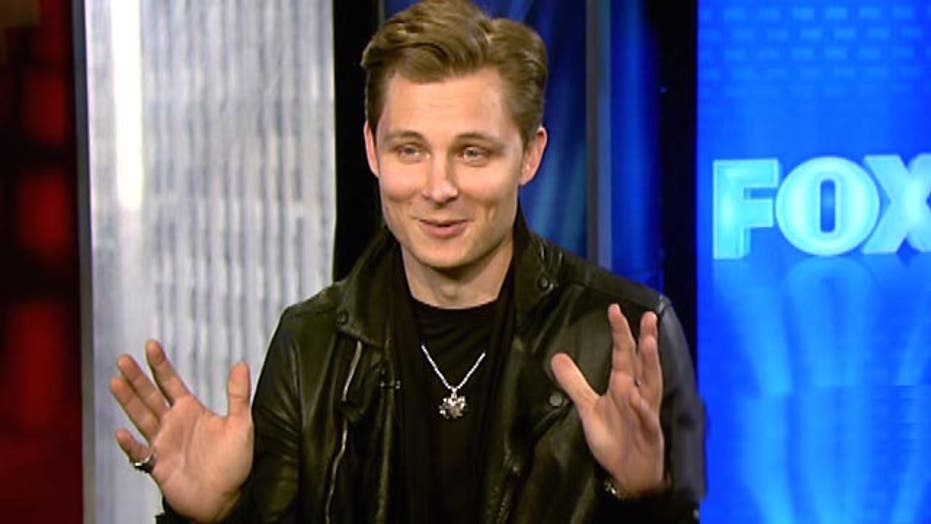 Country singer out with his sophomore album

NEW YORK – Country singing guitar slinger Frankie Ballard doesn’t break from the road, so many fans likely already know the lyrics to the tunes on his just released sophomore album “Sunshine & Whiskey.” Ballard joined us at FOX411 Country to talk about this collection of personal songs, his reaction to “Helluva Life” being his fastest rising single to date and how he doesn’t mind if people want to call him an “overnight” success.

FOX411: How does it feel finally releasing this sophomore album?
Frankie Ballard: Two years of my life have been poured into this album, from the writing of the music to picking the songs to playing them out on the road, wrenching on them in the studio over and over again, the album packing, all that stuff you pour into it… It's all poured into this little silver and gold jewel case on the shelf, and you’re like wow. It’s a special feeling. It’s hard to describe. The other thing is, over the years, people are asking you on the road “Do you have an album out? When’s your music coming out? When’s it coming out?” And you’re putting them off for so long. It feels so nice to be able to say it’s out. Go get it, it’s everywhere music is sold.

I wanted to take more time and let these things kind of grow organically, especially the arrangements of the tunes. So Marshall Altman is the producer on this new project and he really invested a lot of time in me, let me come over late at night and just hang out and experiment… started building these tracks from scratch, from the ground up and they just blossomed into whatever. I would take them out on the road and see how fans were reacting to them and come back and report back to Marshall and say, “this is not really working or we should try this” or whatever so it was really cool and artistically freeing. I had all the freedom I could ever ask for we really experimented.

The songs are really all important to me. They are either experiences that I've had personally or experienced, witnessed, observed in my friends’ and families’ lives or just stories that I really wanted to tell. So I think when people get the record and listen top to bottom they are going to learn a lot about me as a person too.

FOX411: You tested the music on the road, which of these songs got the biggest reaction?
Ballard: Over the years of touring, I can really read people, an audience really well and I can tell when I've got something.  It’s not like a “boo/hiss” situation, I can just see it in people's eyes when they really connect with a song or it's just OK. “Helluva Life” is one that really was connecting with people from day one. You have to remember it's hard to hear lyrics in those situations usually. You're in a honkytonk, and there's beer bottles clanking and you're like “what did he say?” But I could see people engaging in “Helluva Life” and I took that back and it really helped me make my decision to fight for it to be the first single because I could see that it was reacting out there.

FOX411: It’s become your fastest rising single, what does that milestone means at this point in your career?
Ballard: It's incredible. There's so many more impressions that you make when you get into the top 20 and then top 10.  I mean it's so exponential, the spins, and so many more people are hearing the music.  It's a level of exposure I've never experienced.  I can really see it on social media...  If this all takes off the way I hope it does, I think people will probably say “oh, he's an overnight success…” and I don't care if they do that because as long as "success" is at the end of the sentence that they are using to describe me, then I'm ok with it.

FOX411: Are you soaking things up, taking it all in every day?
Ballard: The lyrics to that song “Helluva Life” are very parallel with my journey.  I’ve been doing this for a long time and there's been lots of ups and downs. You know, I thought my first single would come out and we'd be right up the charts and off to the races but things didn't happen that way for me and so I can appreciate the bad times making the good times better.

FOX411: Seems you’re happy to just play anywhere, so favorite part of just getting up on stage…
Ballard: I love to play. I got into the music because I love to play and sing. I get joy out of just that. Getting to go out on a stage with your band and in a new place every night and there's people there that want to share that experience with you, that's the coolest thing in the world for me.