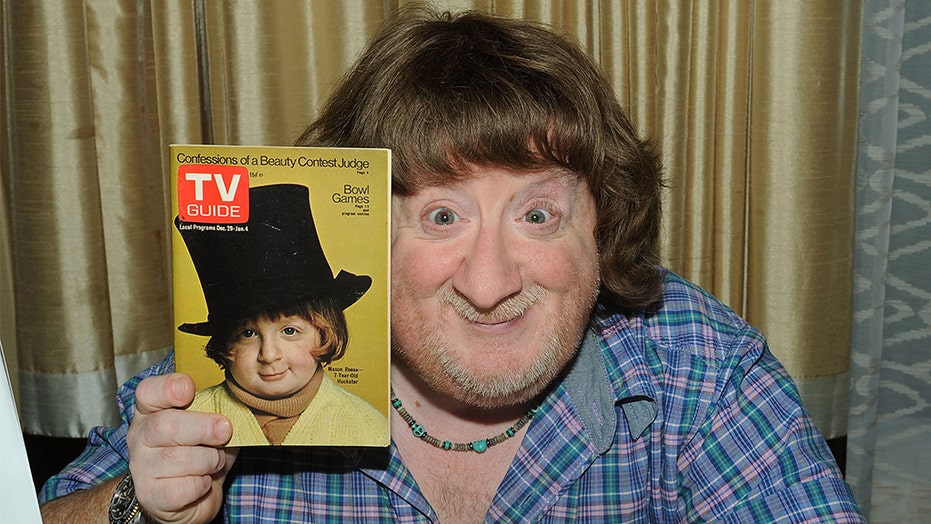 Former child star Mason Reese is defending his girlfriend against critics harking at the couple’s age gap and calling her a “sugar baby.” He also said in a new interview that he’s certain she can’t keep up with him in the bedroom.

The 54-year-old commercial actor, who rose to fame after appearing in 1970s' advertising spots for Post Raisin Bran, Underwood Deviled Ham and Dunkin Donuts, appeared with girlfriend Sarah Russi Thursday on “This Morning with Phillip & Holly” and the pair had much to say about their romance.

Russi, 26, an adult model and online adult entertainer, explained that a friend turned her attention to Reese and told her he was a child actor. Russi, unfamiliar with Reese’s work, looked him up before sending the actor a Facebook friend request — which he accepted. Russi said after Reese liked a few of her pictures, the pair began getting to know each other.

However, the conversation seemed to take a turn when the topic of marriage and intercourse was brought up. “I do want marriage at some point,” Russi said, which garnered a chuckle from the generous Reese. “We made a deal that if we were still together in two years that we would get married and we talked about getting promise rings.”

“It’s definitely a commitment type of thing and I’m 54 — I’ve never really felt the rush to get married, it’s not something that was ever that important to me. But Sarah looks at it in a much more conventional manner than I do,” said Reese, which sparked a kiss from Russi.

“I love that you can’t keep your hands off each other,” Phillip Schofield quipped.

“We’re both very affectionate people,” Reese replied. “She’s more affectionate than I am, I think. But I’m more sentimental than she is."

“And you’re more sexual than she is?” pried Phillip.

“I do have a bit higher sex drive — I’ve always been a highly-driven sexual guy. I know I don’t look like it, but I am.”

Reese explained that sometimes their schedules “don’t quite match up” and Russi is often too tired to engage in the bedroom, but noted that the two get it on “twice a week.”

“We have sex an average of twice a week,” he said. “I might be happier with three [times a week]. But twice is a good compromise for me.”

“Yeah, and I’m happy with twice a week — I feel like it’s a lot,” Russi bantered.

Reese opened up about the highlights of being with a woman much his junior and noted that their relationship has taken off since the pair first met.

“At most, to me, it was innocent, playful flirting,” Mason said of their interaction. “I didn’t think that this really beautiful, young adult model would find anything remotely fascinating about a 54-year-old old man. But she did, and seven months later, I’m thrilled.”

Russi explained that Reese has even already met her parents and her father is a big fan of the actor, who has appeared in over 75 commercials and has been a recurring guest on the “Mike Douglas Show” from 1973 to 1980. (Frank Lennon/Toronto Star via Getty Images, File)

Reese, who lives in New York, met the brunette bombshell in Los Angeles at an adult convention and said he called Russi every day he was in town over the course of a month. He told the hosts that Russi has “basically been living in my apartment since December 4, give or take a few days where she had to travel on the road.”

“I think Mason’s really smart. We laugh together all the time and we have things in common,” said Russi. We love to shoot pool — that’s one of our favorite things to do. We love to eat out at nice restaurants.”

Reese, quickly chimed in, adding that the unlikely lovebirds also “like to kind of just cruise around my neighborhood on the Upper West Side, but the truth of the matter is it’s really just a lot of fun.”

Co-host Holly Willoughby noted that Russi used to be a “sugar baby,” a term applied to young women who accept gifts from older men often in the form of money, rent or mortgage payments, travel expenses, shopping sprees and a plethora of other niceties — and asked for Russi’s response to critics who allege she is dating Reese only for his money and lifestyle.

“It doesn’t really matter what they think because Mason and I really love each other,” Russi said. (Instagram @Sarah_Russi)

“It doesn’t really matter what they think because Mason and I really love each other and that’s all that really matters at the end of the day,” said Russi. “They can’t take that away from us. But, just because I was a sugar baby, doesn’t mean that I’m after his money. I think a lot of girls today are actually sugar babies.”

“Does that mean they can’t find a long-term relationship? I don’t think that’s the case.”

Reese echoed Russi’s sentiments, adding, “That’s not the kind of relationship we have. Do we go out to nice dinners? Sure. Do I buy her a nice bracelet or necklace to wear when we go out? Sure. But the fact of the matter is, she has never once said ‘I’m running low, can you help me with my rent or can you help me with my cellphone bill or anything like that. I’ve never handed her a dollar.”

The actor continued: “Now, in the morning when she wants to go out and get some coffee, do I give her a couple bucks? Sure. But I don’t think that necessarily falls into the category of a sugar baby. I think I’m just a nice boyfriend.”

Russi explained that Reese has even already met her parents and her father is a big fan of the actor, who has appeared in over 75 commercials and has been a recurring guest on the “Mike Douglas Show” from 1973 to 1980, while landing three co-hosting credits on the series, according to IMDb.

“He went to Boston for Christmas and my dad loved him,” said Russi, adding that her parents know she is attracted to older men and have already met a 40-year-old former boyfriend of Russi’s.

“I think they’re just happy that I’m not with a bad boy.”