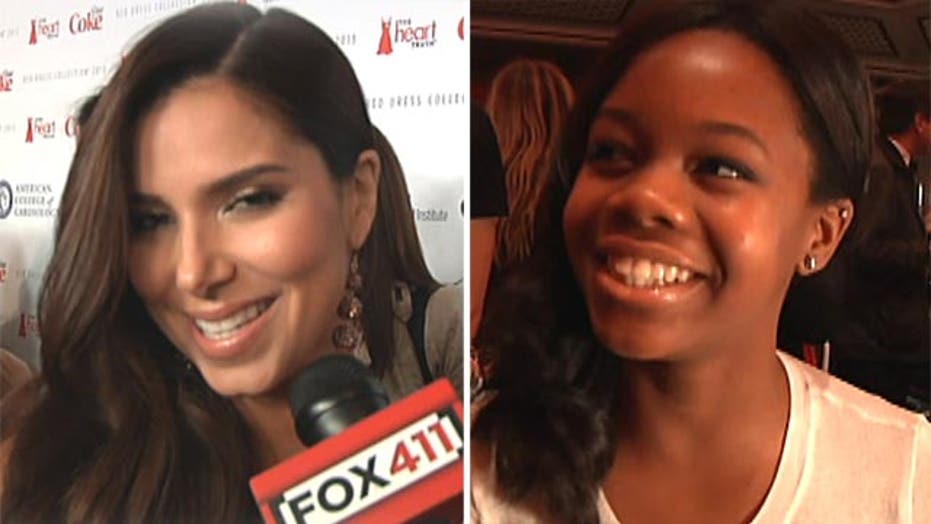 Did anyone fall in their red dress?

The celebrities at the Heart Truth red dress show came from all corners of Hollywood, but they all had one thing in common—they were nervous to walk the runway.

Before the star-studded show, which kicked off Mercedes-Benz Fashion Week, stars like Jamie Chung and Minka Kelly echoed Michael’s sentiments.

“I hope I don’t fall,” Kelly told reporters. “I don’t mind if I trip a little —I did that last year.”

Kelly, like all the celebs at the show, walked smoothly.

Olympic superstar Gabby Douglas said she was excited to walk in the show, wearing a Pamela Rowland gown.

The petite gymnast said she’s had a whirlwind of a year. She dished to FOX 411 her life has changed in many ways, and she now regularly sends group messages to her Olympic teammates and hasn’t had much time for dating.

“I am so honored to be given this platform to inspire girls and young women to follow their dreams,” she said.

Douglas blew kisses as she walked down the runway and waved to the audience.

Others took their runway walks more seriously. Michaels took a deep breath before tackling the runway, and Toni Braxton had focused eyes and a straight face as she walked intensely.

Model sisters Kendall and Kylie Jenner looked serious they as began strutting down the runway, they but loosened up at the end, holding hands as they walked. They posed with their mother Kris, who wore an open-back gown.

By far, Roselyn Sanchez had the most fun on the catwalk. The “Without a Trace” actress shimmed her way down the runway, dancing to Gloria Estefan’s “Conga.” She shook her hips and twirled at the end of the catwalk, giving fans a show.

Similarly, talk show host Wendy Williams sung while on the catwalk, mouthing along the words to Diana Ross’ “I’m Coming Out,” as she waved at the audience.

“I only wear red a few times a year,” Williams said. “It’s usually by request. It’s so flashy.”

But she said she felt great in the Norma Kamali dress she wore to the show, which she bragged could be worn eight different ways.

“I feel like fashion should not be expensive,” she said. “I wanted to wear something that was more affordable, more attainable for the every day woman.”

All the women walking the show were also enthusiastic about the message behind their red dresses, which aimed to raise awareness about the dangers of heart disease for women.

Kelly said the issue at hand was what brought her back to model in the show for the second year in a row.

“I got educated on the Heart Truth subject,” she explained. “[To stay healthy] I exercise, I try and eat healthy. I definitely don’t deprive myself. I do what I can. I am not perfect,” she said.

Williams added that the show was essentially about “empowering women.”

And though the already powerful celebrity women looked even more fierce in the designer red gowns at the show, Kelly dished they weren’t getting to keep the dresses as souvenirs.

“I’m like Cinderella,” she told reporters. “It all goes away after a certain hour.”