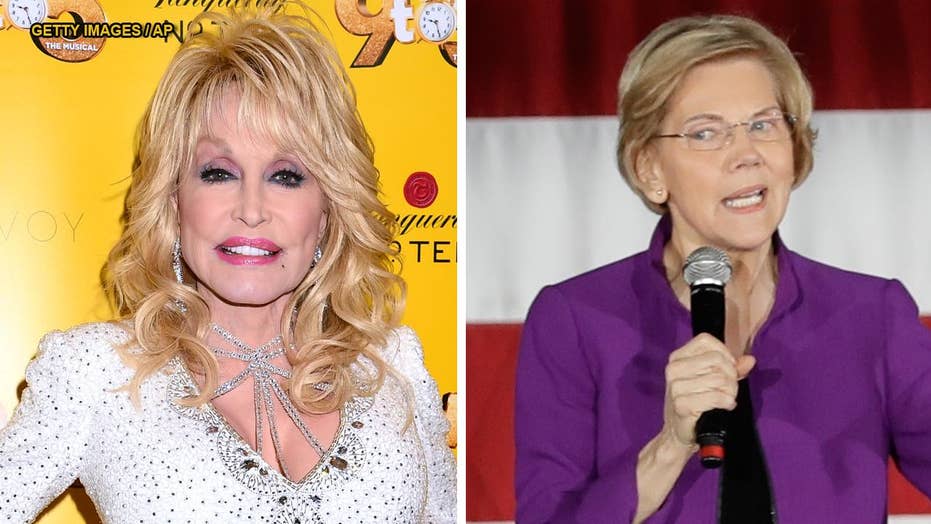 According to Dolly Parton's manager, the singer never gave Senator Elizabeth Warren permission to use her hit song '9 to 5' at a town hall rally in New York City. Parton, who is notorious for keeping both her music and herself out of politics, doesn't ever allow her songs to be involved with any political campaigns, regardless of party affiliation. Warren's campaign declined to comment on Parton's manager's response in regards to using the song.

When Sen. Elizabeth Warren, D-Mass., announced her presidential run, she did so underscored by Dolly Parton’s working-class anthem “9 to 5.” The song seemed to sum up the spirit of a candidacy built on giving workers a fairer shake.

The only problem is that the artist didn’t give her permission to use the hit.

Parton’s manager, Danny Nozell, revealed that not only did Warren use the song without permission, but that the singer doesn't ever allow her songs to be involved with any political campaigns.

DOLLY PARTON OPENS UP ABOUT THE #METOO ERA: 'I NEVER SLEPT WITH ANYBODY UNLESS I WANTED TO'

“We did not approve the request, and we do not approve requests like this of (a) political nature,” Nozell told The Associated Press.

Nozell, CEO of CTK Management, did not respond to a question about whether Parton's team might register any formal complaint about Warren's use of the song, which she played during a Friday town hall meeting in New York City.

Sen. Elizabeth Warren, D-Mass., acknowledges cheers as she takes the stage during an event to formally launch her presidential campaign in Lawrence, Mass. (AP)

Parton is notorious for keeping both her music and herself out of politics. Following an appearance at the 2017 Emmys alongside “9 to 5” co-stars Lily Tomlin and Jane Fonda, the two bashed President Trump live on stage. Parton lightened the mood, saying: "Well, I know about support," the country legend said pointing at her chest.

"I don't voice my political opinions," she told Fox News at the time. "I just get out there and entertain. To me, that's what I do. I don't condemn them."

She elaborated in a recent interview with The Guardian saying:

“I’ve got as many Republican friends as I’ve got Democrat friends and I just don’t like voicing my opinion on things. I’ve seen things before, like the Dixie Chicks. You can ruin a career for speaking out,” she said. “I respect my audience too much for that, I respect myself too much for that. Of course I have my own opinions, but that don’t mean I got to throw them out there because you’re going to piss off half the people.”

If Parton escalates the matter, there's no shortage of precedent: The late Tom Petty reportedly sent a cease-and-desist letter to Rep. Michele Bachmann, R-Minn., over the use of his song "American Girl" in her 2011 campaign, and former President George W. Bush got a similar letter from Petty over his choice of the singer's "I Won't Back Down" during the 2000 campaign.

President Trump has faced his own rejection from popular artists after taking office, most recently from Rihanna. She tweeted in November that "not for much longer" would her music be permitted to play at Trump rallies, and soon after her representatives reportedly sent their own cease-and-desist request.

The Warren campaign declined to comment on Nozell's response regarding its use of "9 to 5."