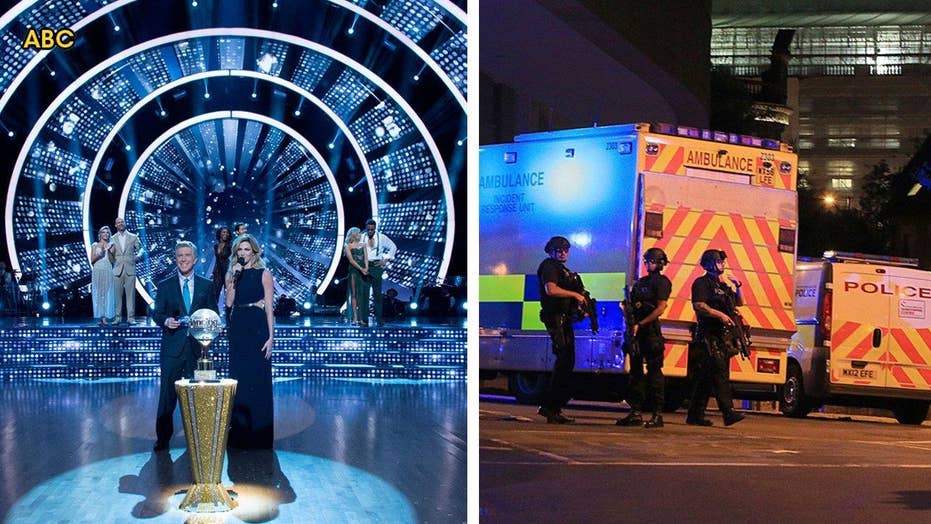 "Dancing with the Stars" began its two-night finale on Monday night with Normani Kordei, Rashad Jennings, and David Ross all performing their very best in freestyle performances to remember.

And football player Jennings was the standout, dancing flawlessly and earning a perfect 80 out of 80 points for two routines.

But by the end of the night, as word spread about a bombing at an Ariana Grande concert in Manchester, it hit Fifth Harmony singer Kordei particularly hard.

Although Kordei didn't do interviews with online press after the live taping, she was overheard telling setsiders, "that she felt bad for everyone involved and was very sad.”

The two young pop stars are close friends and are constantly talking to each other on social media.

After the show, Kordei was seen going to the "DWTS" final rehearsals for Tuesday holding the hand of a friend and with partner Val Chmerkovskiy by her side.

The "DWTS" taping started before the full magnitude of the tragedy was known, however, and featured the final three celebrities and their partners performing a "redemption dance" -- something that they had done before which they wished to perfect – and the freewheeling "freestyle dance."

Jennings and his partner Emma Slater confided in rehearsal that they really wanted to win. The football running back said, "I never won a championship, the big prize." But after his redemption dance Viennese waltz, it looked like the mirror ball trophy was within his reach.

Jennings earned 40 out of 40 from the judges, and they gushed even more after his hip hop style freestyle at the end of the show, which also earned a perfect score.

"You're the one with the momentum going into tomorrow night," Judge Len Goodman said of the high-octane number in which Jennings looked similar to the Fresh Prince of Bel Air.

Kordei finished second on Monday, getting a score of 38 for her redemption quickstep and 40 for her freestyle for a total of 78 points.

The Fifth Harmony star had twisted her ankle badly in rehearsal but showed no sign of the injury in her first dance. Kordei wore a sexy black lace black bodysuit that evoked comparisons to Cher. But Judge Julianne Hough criticized her slightly for having a lack of body contact with partner Chmerkovskiy in the quickstep.

Later, in the freestyle, however, Kordei blew the judges away with a traditional ballroom freestyle in a flowing Grecian-style white dress and received a perfect second score.

Tonioli said the dance, to the song "What the World Needs Now is Love," was "so inspirational, achingly beautiful."

Former Chicago Cubs player David Ross, the underdog of season 24, did his redemption Viennese waltz and was called a "Cinderella story" by Goodman. He got 33 points for that dance.

But the ex-catcher pulled out all stops for his upbeat baseball-themed freestyle with Arnold, which featured him passing out peanuts and then dancing in front of a dugout with plenty of backup dancers and bats as props. At one point, he twirled Arnold around on a bat through the air.

Judges couldn't resist the spirit of Ross' freestyle and awarded him a perfect 40, for a total of 73 out of 80 for the night.

Although he was in third place, Ross told reporters after the show, "I feel like I've already won!" He said of Arnold, "I've got a friend for life."

While heading to his last rehearsal after the show Monday night, Ross said, "I'm taking every second to soak it in 'cause I know it's about over. I'm not really worried about the end result."

The second part of the "DWTS" finale airs Tuesday night on ABC.