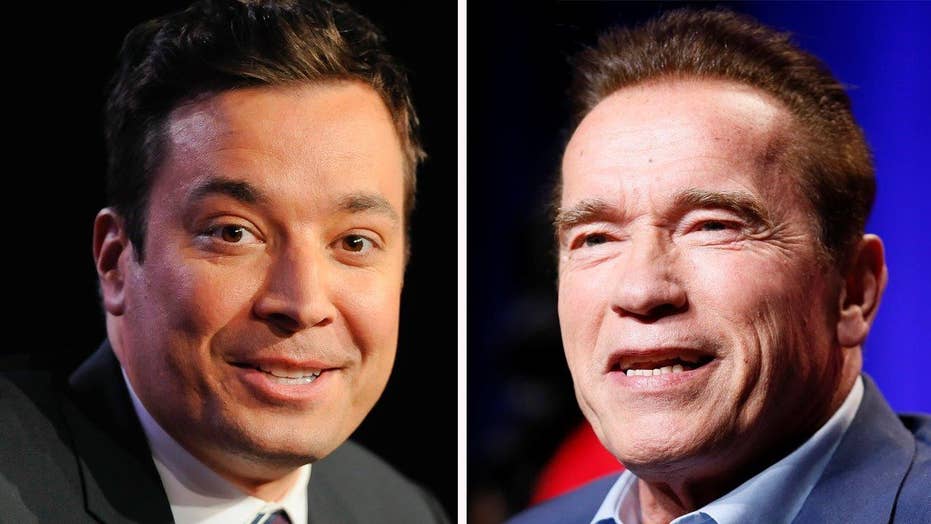 Fox411 Breaktime: Jimmy Fallon grills Arnold Schwarzenegger on what his 'Celebrity Apprentice' catchphrase will be, but shies away from Trump talk

Donald Trump is dumping on Arnold Schwarzenegger's turn as the host of "New Celebrity Apprentice."

The President-elect tweeted that Schwarzenegger's version of "Celebrity Apprentice" pales in comparison to his run as the show's host.

"Wow, the ratings are in and Arnold Schwarzenegger got "swamped" (or destroyed) by comparison to the ratings machine, DJT," Trump tweeted Friday.

But he didn't stop there.

Wow, the ratings are in and Arnold Schwarzenegger got "swamped" (or destroyed) by comparison to the ratings machine, DJT. So much for....

being a movie star-and that was season 1 compared to season 14. Now compare him to my season 1. But who cares, he supported Kasich & Hillary

"Being a movie star-and that was season 1 compared to season 14. Now compare him to my season 1. But who cares, he supported Kasich & Hillary," Trump concluded.

Schwarzenegger tweeted back at Trump, "There's nothing more important than the people's work, @realDonaldTrump."

Adding in a second tweet, "I wish you the best of luck and I hope you'll work for ALL of the American people as aggressively as you worked for your ratings."

Please study this quote from Lincoln's inaugural, @realDonaldTrump. It inspired me every day I was Governor, and I hope it inspires you. pic.twitter.com/QRoOFTZfQ9

When it was announced Trump would remain a producer of the show, he tweeted that he would have "NOTHING to do with The Apprentice except for the fact that  I conceived it with Mark B & have a big stake in it. Will devote ZERO TIME!'

Trump hosted the NBC show for 14 seasons before it was handed over to Schwarzenegger after the President-elect announced his candidacy.

D.L. HUGHLEY SAYS TRUMP ELECTED BECAUSE 'PEOPLE TIRED OF BEING TOLD WHAT TO THINK AND SAY'

According to Variety, "New Celebrity Apprentice" debuted with  4.93 million veiwers, down more than 43 percent from Trump's last premiere in 2015. However, the series had serious competition as ESPN's Rose Bowl ran over more than one hour and the new season of "The Bachelor" aired on ABC at the same time.

A rep for "New Celebrity Apprentice" and Schwarzenegger did not immediately return FOX411's request for comment.