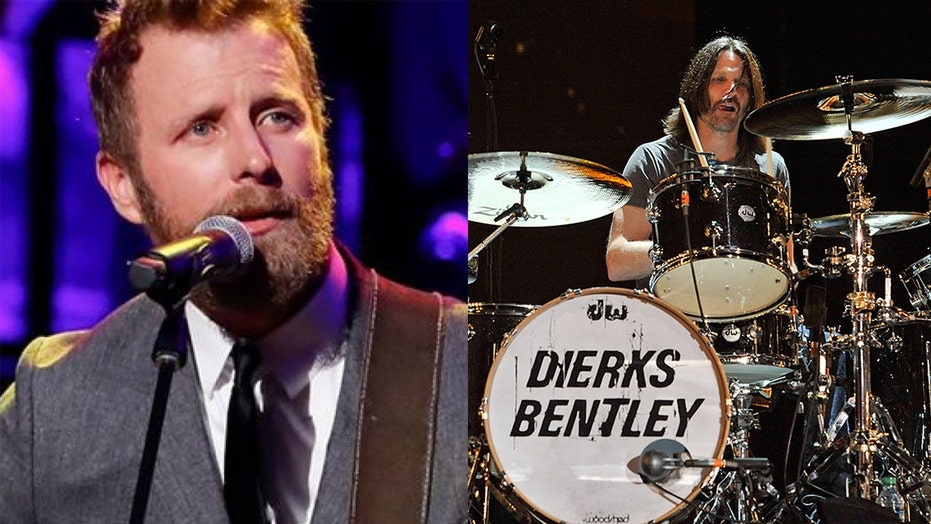 Country star Dierks Bentley avoided the destruction from the recent tornadoes in Nashville, but his longtime drummer Steve Misamore was not so lucky.

The drummer took to Instagram on Tuesday, sharing a video from outside the heavily damaged home he shares with his wife, CarryAnn.

"Hey everybody, Steve and CarryAnn here, as you can see, behind us, we did take the direct hit," Misamore said in the video, revealing the roof had been completely torn off and that a large portion of the home seems to be completely demolished.

"We were in Vero Beach, Florida, staring a vacation and got the call [at] about one in the morning from our neighbor ... that the tornado hit and all," the musician explained. "So we flew back, as you can see, we've lost the top floor, or, you could say, decided to develop an open concept. A very open concept."

The video not only shows the nearly leveled home, but also the couple's yard, littered with debris.

"So we got here and we saw everything and, as you can see, it's total devastation everywhere," Misamore said, panning the camera around his neighborhood, which faced similar destruction. "It's pretty overwhelming.

Misamore said that he and his wife engaged in "a couple hours of crying," but CarryAnn noted that "it's just bricks and lumber and nails."

CARRIE UNDERWOOD SAYS HER HUSBAND HID WITH THEIR SONS DURING NASHVILLE TORNADOES, SHARES HER FAMILY IS SAFE

The couple said that they'll "start new memories," and CarryAnn even suggested they put in a pool.

Misamore left followers with one piece of sage advice: "Stuff happens quick. Be grateful, be thankful."

Bentley announced in an Instagram post that Misamore had lost his home on Tuesday, sharing a video of the storm cell as well as photos of the tornadoes' destruction.

"@astephens1110 and I ducked around this crazy cell and landed at john tune airport around 11:30 last night, coming back from LA," wrote the 44-year-old musician. "Glad we landed when we did. Wouldn’t have been so good an hour later. It was the cell that turned into the tornado."

He added: "Lot of people lost their homes, including our drummer, and a lot of people in need. But no one comes together as a city like #nashville does."

On Wednesday, rescue workers fanned out again through some shattered middle Tennessee communities after tornadoes ripped through the region, killing at least 24, some of whom have been identified.

More than 140 buildings were shredded across Tennessee early Tuesday as the storms moved through, burying people in piles of rubble and wrecked basements.

The tornadoes were spawned by a line of severe storms that stretched from near Montgomery, Ala., into western Pennsylvania.