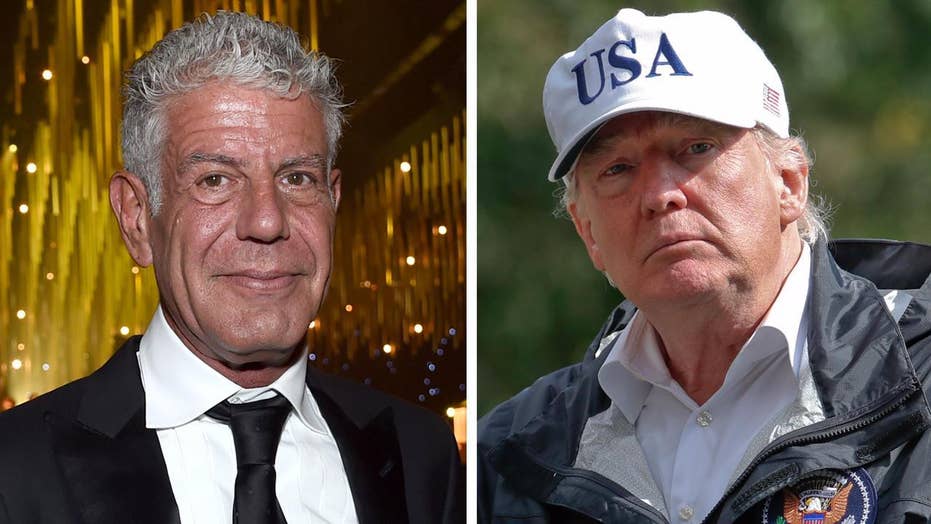 Anthony Bourdain: I would serve 'Hemlock' to Trump

Fox411: Chef and CNN Host Anthony Bourdain, said that he would poison Donald Trump if the celebrity chef was asked to cater a peace summit between the President and Kim Jong Un

Anthony Bourdain, host of “Parts Unknown” on liberal CNN, said last week that he would poison Donald Trump if the celebrity chef was asked to cater a peace summit between the President and Kim Jong Un.

“Hemlock,” Bourdain simply replied when asked by TMZ what he would serve Trump and the North Korean dictator.

Hemlock is a poisonous plant that has been used as a method of execution. The video was published by TMZ last week, but is just now gaining attention.

When reached by Fox News, Bourdain, apparently joking, said that he meant to say “kale” instead of hemlock.

CNN recently fired Kathy Griffin for posing with a bloody head made to look like Trump. The liberal network also cut ties with “Believer” host Reza Aslan after his anti-Trump rhetoric on Twitter was widely criticized. It’s unclear if Bourdain would suffer any consequences for his rhetoric, but it’s worth noting that “Parts Unknown” is significantly more popular than programs hosted by Griffin and Aslan.

This isn’t the first time the “Parts Unknown” host has spoken negatively about Trump. Bourdain, who famously dined with President Obama on an episode of “Parts Unknown,” told TheWrap last year that he wouldn’t eat with then-candidate Trump if given the chance.

“Absolutely f---ing not,” Bourdain said. “I’ve been a New Yorker most of my life… I would give the same answer that I would have given 10 years ago, when he was just as loathsome.”

Bourdain’s “Parts Unknown” is a CNN original series in which the celebrity chef travels the world to showcase food and culture. He also told TMZ that he wouldn’t be interested in filming an episode in North Korea because “most of the population are starving.”

As for Bourdain’s thoughts on Kim Jong Un, the CNN star called him a “chubby, evil little f---.”

CNN did not immediately responded to Fox News’ request for comment.