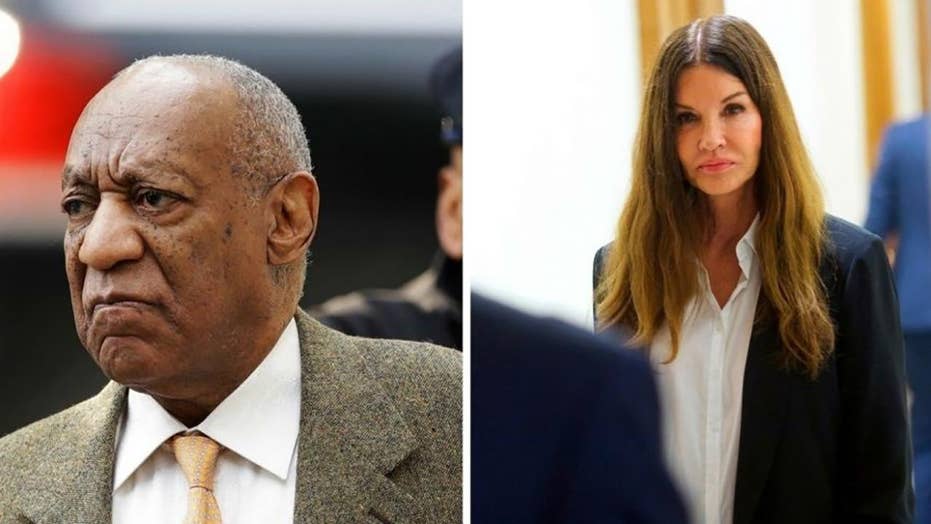 Dickinson says Bill Cosby drugged and raped her in 1982

Bill Cosby faced accusers in court Thursday, including supermodel Janice Dickinson, who told the jury she was raped by the comedian after he gave her a pill she said he claimed would help with menstrual cramps.

Dickinson, 63, the fourth accuser to take the witness stand at Cosby's sex assault retrial in suburban Philadelphia, told jurors she was "rendered motionless" by the pill he gave her. The supermodel said Cosby got on top of her in his Lake Taho, Calif., hotel room. She said she was 27 years old at the time and felt vaginal pain afterwards. When she woke up the next morning she said she noticed semen between her legs.

Prosecutors are calling Dickinson and other accusers to the witness stand to show the 80-year-old comedian has a history of drugging and molesting women.

Dickinson is one of five additional accusers whom prosecutors are calling to the stand to show Cosby had a history of drugging and molesting women long before he was charged with violating Andrea Constand at his suburban Philadelphia home in 2004.

Another accuser, Janice Baker-Kinney, returned to the witness stand after punctuating the first two hours of her testimony with a firm declaration: "I was raped."

Baker-Kinney was a 24-year-old casino bartender in Reno when she says Cosby gave her pills she suspected to be quaaludes and had sex with her in 1982.

KHLOE KARDASHIAN’S EX-HUSBAND LAMAR ODOM ‘WOULD ABSOLUTELY GET BACK TOGETHER’ WITH HER, REPORT SAYS

During cross-examination, Cosby lawyer Tom Mesereau suggested that Baker-Kinney was motivated to distort the facts of a fun evening when she heard about a possible $100 million windfall from Cosby.

She came forward in April 2015, a few months after lawyer Gloria Allred proposed that Cosby set aside a chunk of his fortune to compensate accusers. Cosby never agreed to that.

Baker-Kinney told the jury she was motivated by a desire to help other accusers, and that she's only relied on Allred as a media adviser and point of contact "to make sure I didn't get tripped up." She said she's never paid Allred, hasn't been paid by the lawyer and hasn't been involved litigation against Cosby.

Cosby is charged with sexually assaulting Andrea Constand at his home in 2004. He says it was consensual. His first trial ended in a hung jury.

The defense has dismissed the other women's testimonies as "prosecution by distraction."

"These women proved that they were here to back up their sister — they got their sister's back," Cosby spokesman, Andrew Wyatt, said outside court Thursday.

During cross-examination, the defense sought to point out inconsistencies in how Baker-Kinney has described the encounter over the years. Prosecutors rebutted that by calling Baker-Kinney's best friend to the stand. Mary Chokran testified that when they talked about the alleged assault a week after it happened, Baker-Kinney was "very distraught" and "disappointed in herself."

"She thought she had taken some mood-enhancing drug, a party drug, not anything that would leave her unconscious the way she found herself," Chokran told the jury. "She was violated. She blamed herself for taking the pill. I said that didn't invite him to rape her."

Now well into middle age, Baker-Kinney and the other two accusers who have testified so far spoke of entering Cosby's orbit as starstruck young women seeking career help or, in Baker-Kinney's case, simply looking for a good time.

Lise-Lotte Lublin told jurors she lost consciousness and doesn't remember anything else about that night in 1989 — a time when Cosby was at the height of his fame starring as sweater-wearing father-of-five Dr. Cliff Huxtable on America's top-rated TV show, "The Cosby Show."

All of them testified they wound up unconscious from the pills or alcohol Cosby gave them, unable to say no or resist as he had his way with them.

Chelan Lasha, sobbing uncontrollably as she testified Wednesday, told jurors that she got to know Cosby through a family connection as a 17-year-old aspiring model and actress in 1986.

Lasha said Cosby gave her a little blue pill he described as an antihistamine to help her get over a cold, along with two shots of amaretto "to help break up the cough."

The combination immobilized her and rendered her unable to speak. Cosby then assaulted her, touching her breast and rubbing himself against her leg, Lasha said.

HILARY SWANK SAYS FANS MISTAKE HER FOR JENNIFER GARNER, GET FURIOUS WHEN SHE TRIES TO CORRECT THEM

Asked what was going through her mind, Lasha testified: "Dr. Huxtable wouldn't do this. Why are you doing this to me? You're supposed to help me be successful."

Turning to Cosby, she said: "You remember, don't you, Mr. Cosby?"

Cosby, who portrayed kindly Dr. Cliff Huxtable on his hit TV comedy "The Cosby Show," turned away and smiled slightly.

The charged rhetoric irritated Cosby's lawyers, who lost three bids for a mistrial, as prosecutors built a case that the man once revered as "America's Dad" was one of Hollywood's biggest predators long before he met Constand, the chief accuser in his retrial.

The former women's basketball administrator at Cosby's alma mater, Temple University, alleges he gave her pills and molested her.