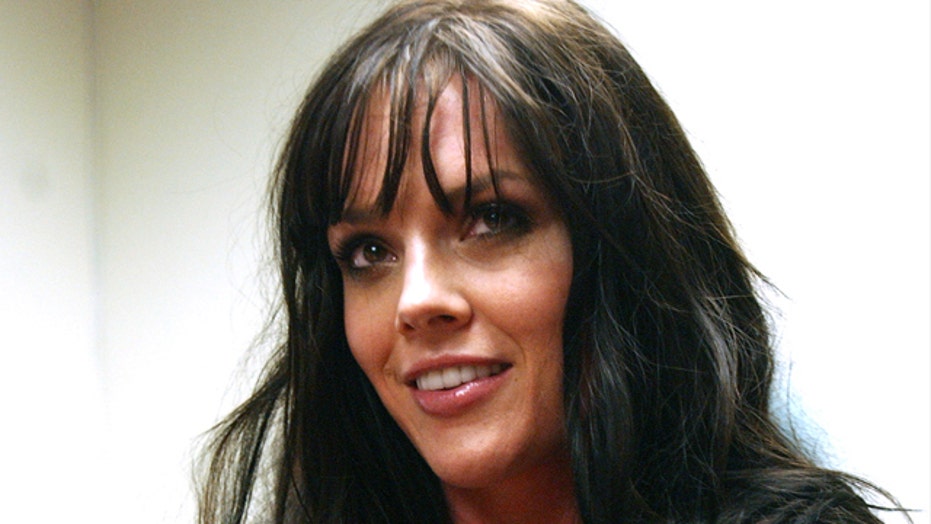 Anna Benson and former major league pitcher Kris Benson have been working through a divorce for the past year, and apparently it's not going very well.

The “Baseball Wives” star was arrested on Monday after she allegedly donned a bulletproof vest, barged into her estranged husband's Marietta, Ga. home, and threatened him with a gun and a metal baton unless he gave her $30,000.

She is charged with assault and criminal trespassing.

Kris, 38, said he appeased her by saying he was leaving to get money, but instead called police, TMZ reports.

According to the incident report, Anna smashed her ex's computer with the baton and wore an ammo belt, which police later found when they searched her. They also found that she had a knife with her.

Anna claimed she did nothing wrong and was surprised when police arrested her. She told police she went to Kris' home to discuss their issues. She said she wore the bulletproof vest because she was "testing [it] for a company" and "had to wear it for an extended time."

This is just the latest drama in their stormy relationship.

Anna, 37, told FOX411 in July 2012 that Kris had filed divorce papers after she accused him of having an affair with her best friend.

“Kris was my whole life. And he left me for someone else and he just abandoned us," she said then. "I’m scared and I just don’t know what I’m going to do or how I’m going to take care of these kids.”

The couple have three children together.

Anna claimed she received $4,000 a month in child support, and had to register her children as “homeless” for the fall semester at their local school.

“I don’t have any documentation to provide to the school in the form of a lease, or a home, or an address, or a utility bill,” claimed Benson. “For me to be able to get them in the school district that is appropriate, I have to register them as being homeless. I can’t give my mom’s information, or they can’t go to that school.”

Kris Benson said then: “As much as I'd love to comment about these accusations, I think it's best for myself and my children that I let things be handled legally, not through the media.”

Anna starred on VH1’s “Baseball Wives” in 2011 and 2012. She first made headlines in 2004, when she threatened to sleep with all of her husband's teammates should he ever cheat on her.

“I told [Kris], cheat on me all you want," she said. "If you get caught, I’m going to screw everybody on your entire team."