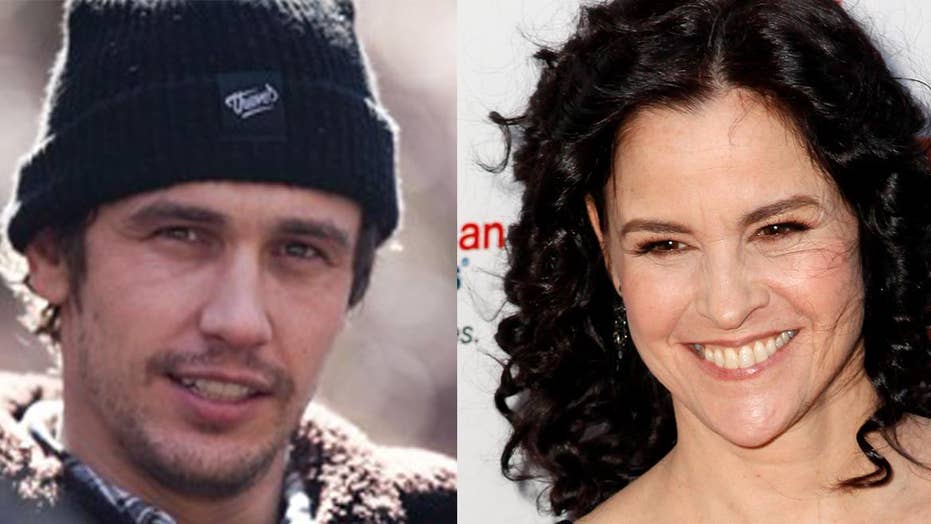 Why James Franco's former co-star, Ally Sheedy, is calling the actor out for his Golden Globes win on Twitter.

James Franco won the Golden Globe for best actor in a musical or comedy Sunday night, but his win wasn’t without controversy.

Shortly after Franco’s win for “The Disaster Artist,” an unverified Twitter account for actress Ally Sheedy began slamming the win.

Her tweets garnered social media attention and were deleted after outlets like Vanity Fair and E! News began reporting that Sheedy had called out Franco. One tweet read, “James Franco just won. Please never ever ask me why I left the film/tv business.”

Another stated, “Ok wait. Bye. Christian Slater and James Franco at a table on @goldenglobes #MeToo”

An earlier tweet from the night also referenced Franco. It read, “Why is a man hosting? Why is James Franco allowed in? Said too much.”

Reuters (Actress Ally Sheedy (right) of "The Breakfast Club" fame slammed James Franco's 2018 Golden Globe win, hinting he led to her decision to leave the entertainment industry. The actors worked together on the play "The Long Shrift.")

Many fans retweeted and replied to the messages which they took to imply the “Breakfast Club” star was accusing Franco of some sort of sexual harassment or abuse.

According to Vanity Fair, Sheedy worked with Franco on the 2014 play "The Long Shrift."

Sheedy is best known for her roles in “St. Elmo’s Fire” and “The Breakfast Club.”

Vanity Fair reported that it reached out to both Franco and Sheedy but has not received comment.

This isn’t the first time Franco has caused controversy.

In 2014, Franco made headlines when messages became public that showed he reportedly tried to arrange a meetup with a 17-year-old girl at a New York hotel. After the scandal broke, Franco admitted the messages were legitimate and apologized saying he was “embarrassed” and had “used bad judgement.”

That same year he shared a nearly nude image on Instagram that showed him posing with his underwear pulled low and his hand in the waistband.

Franco’s win Sunday puts him on the inside track for an Academy Award nomination.

Franco played Tommy Wiseau, Hollywood cult hero of mysterious origins and the force behind the worst-best-film-ever "The Room," in "The Disaster Artist."

Franco, 39, a clear but not overwhelming favorite in the category, beat out fellow nominees Steve Carell for "Battle of the Sexes," Ansel Elgort for "Baby Driver," Hugh Jackman for "The Greatest Showman" and Daniel Kaluuya for "Get Out."