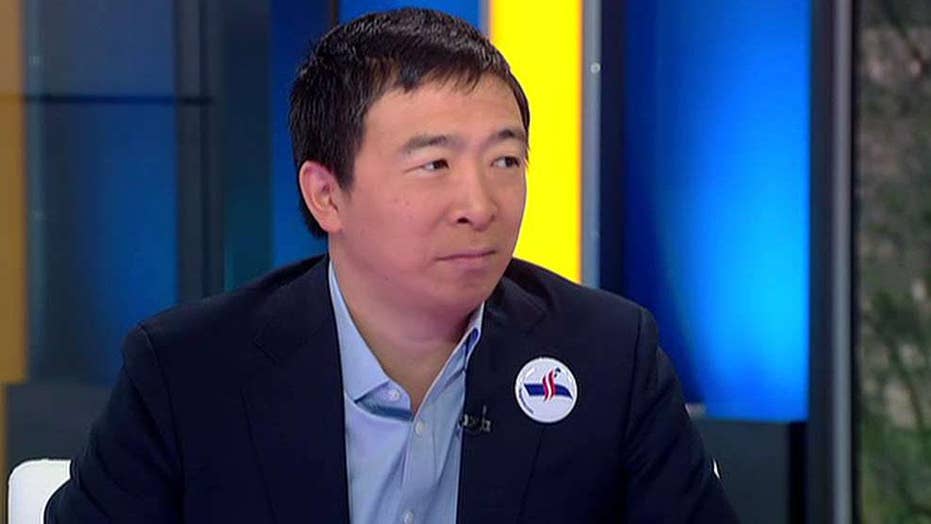 Presidential candidate Andrew Yang wants to give every adult $1,000 a month

Democratic 2020 candidate Andrew Yang appeared on “Tucker Carlson Tonight” on Friday to discuss what he described as the threats that automation can bring to the U.S. if human workers are increasingly replaced by machines.

Yang began by pointing out that 4 million manufacturing jobs have been lost to automation in recent years in states like Michigan, Ohio, Pennsylvania and Wisconsin, adding that many communities in those states “have never recovered.”

Half of those people have “left the workforce” while the other half “filed for disability,” he claimed.

MEET THE 2020 LONGSHOTS: CONFIDENCE, AND MAYBE SOME EGO, KEEP THESE CANDIDATES IN CROWDED RACE AGAINST ALL ODDS

The 44-year-old entrepreneur and investor warned that other workers -- like truck drivers, retail workers, and fast food workers -- may face a similar fate.

“That’s why I’m running for president,” Yang told Fox News' Tucker Carlson. “I think it would be insane to sit back and watch this automation wave overtake our communities and our economy.”

“That’s why I’m running for president. I think it would be insane to sit back and watch this automation wave overtake our communities and our economy.”

“We need to evolve," the Ivy League-educated Yang, who hails from Schenectady, N.Y., and now lives in New York City, continued. "We need to actually start pushing the way we think of economic progress to include how our families are doing, how our children are doing, and things that would actually matter to the American people."

When asked why the issue of automation isn’t discussed more prominently in either major party, Yang responded that, as a presidential candidate, he would push the issue “to the center of the mainstream agenda,” and insisted that every 2020 candidate state their own position on the subject.

Yang also vowed to update key economic metrics, like the GDP and unemployment rates, which he called “completely misleading.”