Twelve Thai schoolboys and their soccer coach, all trapped in a cave in northern Thailand for nearly two weeks, sent out a batch of letters Friday in which the boys said they were OK and the coach apologized to their parents.

Meanwhile, a plan to rescue the boys and their coach, through an operation called a "buddy dive," could start this weekend, ABC News reported.

"To the parents of all the kids, right now the kids are all fine, the crew are taking good care,” coach Ekapol “Aek” Chanthawong wrote in his letter, which was among a batch delivered by divers from the Royal Thai navy. 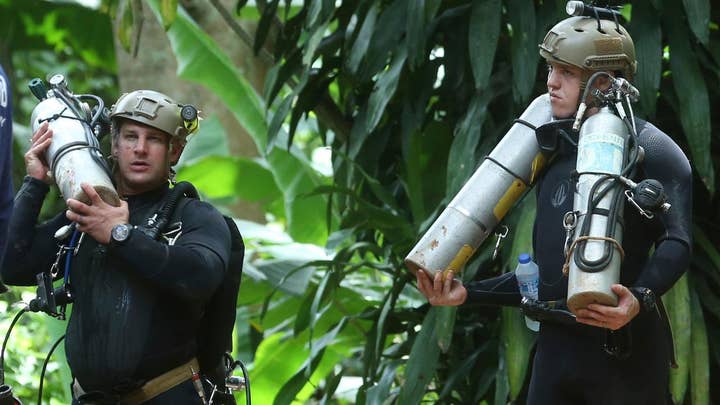 “I promise I will care for the kids as best as possible. I want to say thanks for all the support and I want to apologize to the parents," the coach wrote.

“I promise I will care for the kids as best as possible. I want to say thanks for all the support and I want to apologize to the parents."

In their small collection of brown, stained handwritten notes, the boys wrote that they were doing well and were missing their families.

“I love you mom, I love you dad, and my brother too,” wrote Nick, 15, ending with a hand-drawn heart, according to Time magazine. “When I get out, I want to go have a pork barbecue.”

— Nick, one of the trapped schoolboys (translated from Thai)

“Don’t worry, I just disappeared for two weeks,” his friend Bew, 14, wrote, also in Thai. “I’ll help you with your shop every day, I will hurry out of here.”

The Thai navy SEALs, who have been leading the rescue efforts, wrote in a Facebook post that “the kids said ‘don’t worry,’ everyone is strong, they have a long list of food they want to eat when they get outside.

“They ask that their teachers won’t give them much homework when they come back,” the SEAL post reads, translated from Thai.

Thai rescuers prepare to enter the cave where 12 boys and their soccer coach have been trapped since June 23, in Mae Sai, Chiang Rai province, in northern Thailand Friday, July 6, 2018. (Associated Press)

The coach and the boys, 11 to 16, went exploring in the cave after a June 23 soccer match. But monsoon flooding cut off their escape route and prevented rescuers from finding them for nearly 10 days.

In its report, ABC News cited an internal U.S. government document that said the first phase of an evacuation plan could be completed by 6 p.m. Saturday local time, with the second phase starting as soon as Sunday morning local time.

The plan would involve bringing the boys and their coach out of the cave the same way they entered, Narongsak Osatanakorn, a Thai official in charge of the rescue operation, told reporters Friday, according to ABC News.

The operation would involve Thai navy divers, with support personnel from the U.S., Britain and other nations, the report said.

Thai officials had been suggesting in public statements that a quick underwater evacuation of the boys and their coach was needed because of the possibility that access to the cave could soon close again due to seasonal monsoon rains expected this weekend.

Narongsak Osottanakorn, chief of the rescue operation, said on Saturday that conditions are "perfect" to evacuate them in the coming days before fresh rains and a rise in carbon dioxide close in.

Soldiers carry a pump to help drain the rising flood water in a cave where 12 boys and their soccer coach have been trapped since June 23, in Mae Sai, Chiang Rai province, in northern Thailand Friday, July 6, 2018. (Associated Press)

"Now and in the next three or four days, the conditions are perfect (for evacuation) in terms of the water, the weather and the boys' health," he said.

"We have to make a clear decision on what we can do."

The only way to reach them was by navigating dark and tight passageways filled with muddy water and strong currents.

The dramatic rescue efforts and the boys' plight have garnered international attention, perhaps most notably at soccer's most widely watched event, the World Cup.