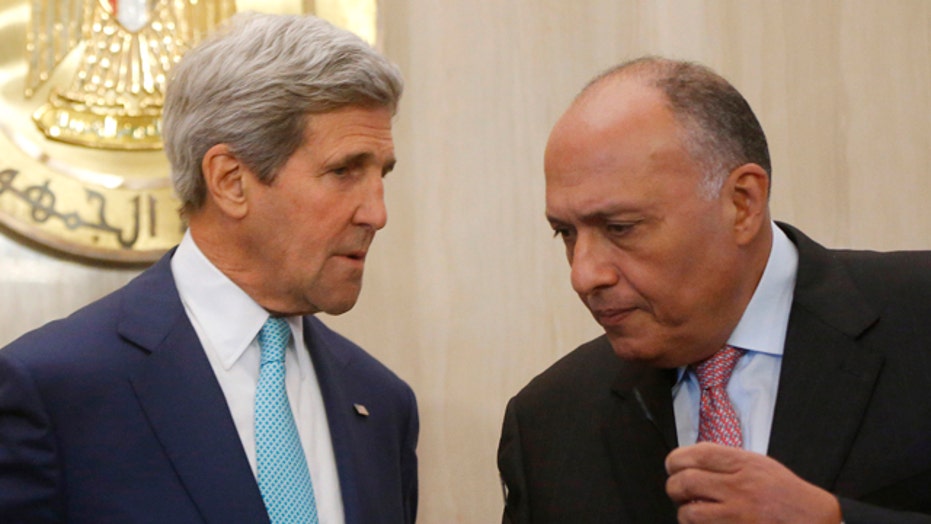 Can Kerry make progress on a cease-fire in Cairo?

Diplomatic efforts to halt violence in the Gaza Strip intensified Tuesday as Secretary of State John Kerry and Egypt's Foreign Minister made a new push for a cease-fire, while the Israeli army confirmed that one of its soldiers was missing after a deadly battle earlier this week.

The Times of Israel reported that the Israel Defense Forces said that it had not recovered the body of a seventh serviceman believed to be killed in action early Sunday morning when an armored personnel carrier was destroyed in an attack.

The IDF said that the bodies of the other six soldiers killed in the armored personnel carrier had been recovered and identified. The paper reported that the IDF had stressed that there was little chance the soldier had survived the attack.

Military officials identified the soldier as Sgt. Oron Shaul, according to The Associated Press.

The disappearance raised the possibility that Shaul had been captured by Hamas -- a nightmare scenario for Israel. In the past, Israel has paid a heavy price in lopsided prisoner swaps to retrieve captured soldiers or remains held by its enemies.

Hamas-allied militants seized an Israeli soldier in a cross-border raid in 2006 and held him captive in Gaza until Israel traded more than 1,000 Palestinian prisoners for his return in 2011. Some of the prisoners were involved in grisly killings.

Hamas' claimed earlier this week that it had captured an Israeli soldier. Israel's U.N. ambassador initially denied the claim but the military neither confirmed nor denied it.

A representative of Shaul's family, Racheli Gazit, said that "so long as the verification has not been completed ... as far as the family is concerned Oron is not a fallen soldier."

In Cairo, U.N. chief Ban Ki-moon and U.S. Secretary of State John Kerry met Egyptian officials Tuesday in the highest-level push yet to end the deadly conflict. Ban then traveled to Israel.

The U.N. secretary-general said Tuesday it is his "hope and belief" that his emergency mission to the Middle East will lead to an end to the fighting between Hamas and Israel "in the very near future."

Ki-moon told the Security Council by videoconference from the West Bank city of Ramallah that he could not publicly reveal details "at this highly sensitive moment." As he started to address the council a siren could be heard in the background.

Egyptian Foreign Minister Sameh Shukri said he planned to work with U.S. and other world leaders "to not only resolve this issue but also to set in motion once again the peace process that Secretary Kerry has been so actively involved in so as to end this ongoing conflict between the Palestinians and the Israelis."

Kerry said his discussions with Shukri sought to "hopefully find not only a way to a cease-fire, but a way to deal with the underlying issues, which are very complicated."

But he stopped short of agreeing to reopen the peace talks that abruptly broke off last April after nearly nine months of his personal attention.

In a separate meeting with Kerry, Arab league President Nabil Elaraby called the Gaza bloodshed a "massacre." More than 600 Palestinians and 29 Israelis have been killed since the new war began July 8.

"People are dying in the streets in large numbers," Elaraby told Kerry. "And what is needed is for all hostile acts should end as soon as possible. Just like someone is bleeding, and you need a Band-Aid, but that is not enough. You need more to be able to survive."

Kerry also met with Palestinian intelligence chief Majid Faraj early Tuesday morning, and it was expected he would travel to Israel later this week. The U.S. is sending $47 million in humanitarian aid for tens of thousands of Palestinians who have fled their homes in Gaza to escape the fighting.

The Palestinian U.N. envoy told The Associated Press that a draft U.N. resolution calling for an immediate cease-fire in the Gaza Strip will be formally circulated to the Security Council.

Riyad Mansour told reporters before the Security Council's monthly meeting on the Israeli-Palestinian conflict and the Mideast on Tuesday that the resolution would be given to all 15 council members later Tuesday. It was endorsed by the Palestinians' supporters last week.

A draft dated July 18 and obtained by The Associated Press calls for "an immediate, durable and fully respected cease-fire, including the withdrawal of Israeli occupying forces from the Gaza Strip."

It also calls for "all necessary measures to ensure the protection of civilians, including the immediate cessation of military reprisals, collective punishment and excessive use of force against the Palestinian civilian population."

Meanwhile, the Federal Aviation Administration is telling U.S. airlines they are prohibited from flying to the Tel Aviv airport in Israel after a Hamas rocket exploded nearby.

The news organization reported there were no injuries in the incident, but it came a day after Israeli Foreign Minister Avigdor Lieberman was quoted by local media as saying Israel will work to shut down Al Jazeera within its borders.

Before Kerry began his meetings, Israeli aircraft hit more than 70 targets in the Gaza Strip, including the home of the late leader of Hamas' military wing, five mosques and a soccer stadium, according to a Gaza police official.

Israel’s military reported that 25 rockets were fired at Israel from Gaza overnight, 10 of which were intercepted by its Iron Dome missile defense system and 14 of which hit Israel. One rocket fell short inside Gaza, the Jerusalem Post reports.

Israeli Prime Minister Benjamin Netanyahu continued to lash out at Hamas Tuesday, saying the group is "like Al Qaeda" and it must be dealt with accordingly.

It's not clear exactly what Israel and Hamas would each demand in return for agreeing to a truce now, but senior State Department officials said the issue of opening border crossings from Gaza -- potentially into Israel and Egypt -- was under discussion.

Kerry met early Tuesday with Palestinian intelligence chief Majid Faraj and was also expected to meet with Egyptian President Abdel Fattah al-Sisi and other top officials over the next few days. But there were no immediate plans for face-to-face meetings with officials from Qatar, Turkey, Israel and the Palestinian city of Ramallah. State Department aides said it remained uncertain what could be accomplished in the talks.

A truce between Israel and Hamas has been beset by violence three times since 2009, and was last brokered in November 2012 by Kerry's predecessor, Hillary Clinton.

Having already deployed an estimated 1,000 ground troops, Israel's military has pushed farther into Gaza than it had in 2012 and the conflict is farther along now than it was then. At the same time, the State officials noted, Hamas believes it was not given what it was promised in 2012 to lay down its arms, making it more skeptical of a cease-fire now.

Finally, Hamas' relationship with Egypt, which is negotiating directly with the militant group, has deteriorated since President Mohammed Morsi was ousted in last year's coup. Egypt has since outlawed Morsi's party, the Muslim Brotherhood, which has ties to Hamas.