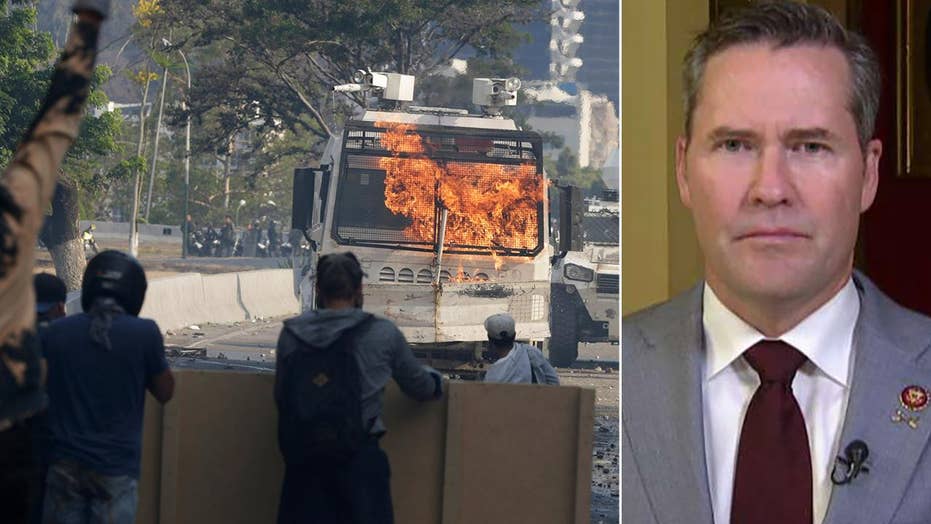 Rep. Waltz on possible U.S. military action in Venezuela: It would be a supporting, logistical role.

Florida Republican Rep.&nbsp;Mike Waltz&nbsp;weighed in on the possibility of U.S. military action in Venezuela on Thursday, saying it would be&nbsp;"a supporting" role and "a logistics effort.”

Florida Republican Rep. Mike Waltz weighed in Thursday on the possibility of U.S. military action in Venezuela, saying it would take the form of "a supporting" role and "a logistics effort.”

Waltz, a member of the House Armed Services Committee, made the comment on “America’s Newsroom,” a day after Secretary of State Mike Pompeo told FOX Business that military action is on the table in Venezuela.

“The president has been crystal clear and incredibly consistent: Military action is possible if that's what’s required, that's what the United States will do,” Pompeo told Fox Business’ Maria Bartiromo on Wednesday.

He added, “We're trying to do everything we can to avoid violence.”

Meanwhile, Venezuelan opposition leader Juan Guaidó has said he and his supporters are determined to recover their freedom; on Thursday he said he hoped public employees would stage strikes to put pressure on embattled President Nicolas Maduro.

Guaidó’s push for a general strike and for Venezuelans to remain in the streets – his latest moves in a fledgling attempt to drive Maduro from power -- came a day after clashes between his forces and anti-government protesters left one woman dead and dozens injured.

On Thursday, Waltz said the U.S. military is now “looking at all options.”

“They're looking at what assets they have in the region," said Waltz, adding, "We've had special forces next door in Colombia for many years training the Colombian Army.”

He said the military is considering how to “pre-position ships in the region” and assist with humanitarian supplies, and is communicating with allies.

“At the end of the day, this needs to be a coalition effort,” said Waltz.

“The U.N. is a non-starter because of the Russia and China veto. I think we look to the OAS, the Organization of American States, 34 nations, and keep in mind, 50 nations have recognized the Guaidó regime."

He added, “If we're putting boots on the ground, they need to be regional troops and it needs to be a humanitarian effort that they are protecting.”

When asked if he thinks the window of opportunity to get Maduro out the country has passed, Waltz said: “I don't think it's passed and what's important, it’s not that Maduro is stubborn, Maduro’s dictatorship is crumbling.

“What's propping it up is the Cubans, and I’ve seen estimates ranging anywhere from 5,000 to 20,000 Cuban intelligence and security forces are on the ground. And it’s important to keep saying: ‘But why does this matter? Why does this matter to Americans and to Floridians?’”

He went on to offer a twofold explanation: "One, you have a massive refugee crisis that I think has been underreported. It’s approaching the size of what’s happened in Syria. Three million refugees are flowing into neighboring countries and destabilizing the region; meanwhile they’re going to start destabilizing Central America as well, and that will affect the United States.”

“If Maduro does go," he speculated, "I think the Castro regime is not far to follow because they shifted the Cuban regime's dependence from the Soviet Union to Venezuela and [Hugo] Chávez, Maduro's predecessor, a long time ago. So there’s a lot at stake here.”

On “America’s Newsroom,” Waltz also criticized Rep. Ilhan Omar’s argument that President Trump's administration could be partly to blame for the ongoing turmoil in Venezuela through "bullying" and sanctions.

“A lot of the policies that we have put in place have kind of helped lead the devastation in Venezuela and we have sort of set the stage for where we are arriving today,” Omar, D-Minn., told PBS' "Democracy Now!" on Wednesday. “This particular bullying and the use of sanctions to eventually intervene and make regime change really does not help the people of countries like Venezuela. and it certainly does not help and is not in the interest of the United States."

Waltz's retort? “That's nuts. One word, that is crazy.

“I would invite her to go down to the border and go down to Venezuela where you have rolling blackouts, people are literally starving, in formerly the richest country in South America, sitting on the world's largest oil reserves. “And it’s not because they lack resources, it’s the absolute corruption of socialism, and it’s because that flies in the face of her and others' narrative that that’s why they’re looking for excuses and to point the finger at others. But this is an absolute failure of socialism.”