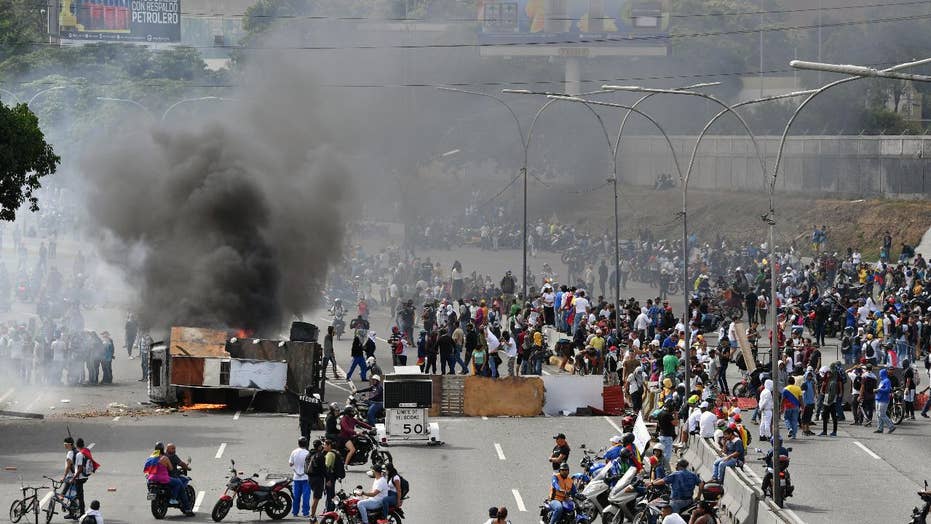 President Trump officially recognized opposition leader Juan Guaido as the Interim President of Venezuela on Wednesday, amid massive rallies throughout the country

Venezuelan opposition leader Juan Guaidó is now marching in the streets, alongside a small contingent of heavily armed troops, to demand the removal of Venezuelan President Nicolás Maduro from office.

A furious Maduro broke diplomatic ties with the U.S. in January after tens of thousands publicly protested the socialist leader's rule and the country's current state, calling it a "crisis." Maduro took his presidential oath on Jan. 10 for a second term amid an economic crisis that has forced millions to exit.

"It's now or never!" a protester chanted Tuesday as he encouraged spectators to join him.

Guaidó applauded troops who joined him in the streets, adding in the coming hours he would release a list of top commanders supporting the uprising.

"The armed forces have taken the right decision," Guaidó said. "With the support of the Venezuelan people and the backing of our constitution, they are on the right side of history."

Earlier this year, Trump publicly declared that the U.S. would recognize Guaidó as the country's interim president — a move that infuriated Maduro, who in response said he was cutting off relations with the U.S. and gave U.S. diplomats 72 hours to leave the land.

"The citizens of Venezuela have suffered for too long at the hands of the illegitimate Maduro regime," Trump said, adding that he would work alongside Guaidó to "restore constitutional legitimacy."

Here's what you need to know about Maduro

He's the successor to Hugo Chavez

The late Hugo Chavez was Maduro's mentor and predecessor.

Maduro was hand-picked by Chavez to take over the government. He successfully won his first election, defeating Henrique Capriles — albeit narrowly — after Chavez's death from cancer in March 2013.

In the 1990s, Maduro turned to the Revolutionary Bolivarian Movement-200 (MBR-200), a social movement led by Chavez. During his time with the group, Maduro pushed for the release of Chavez who was jailed for attempting a coup. Clearly, Maduro earned respect for his dedication: Chavez later named him foreign minister.

“[Maduro is] a complete revolutionary, a man of great experience despite his youth, with great dedication and capacity for work, for leading, for handling the most difficult situations," Chavez said of Maduro, while campaigning for him to take over his position, according to The Washington Post.

He was dubbed “world's most embattled political leader"

Maduro has faced opposition since he officially took office in 2013.

In 2017, Time Magazine called him the "world's most embattled political leader," noting how often Venezuelans take to the streets to protest his leadership. At the time, his approval rating was in the low 20s, The Washington Post reported, citing a poll.

Several countries have taken on Maduro in recent months, particularly as the country faces a historic economic crisis that has left some starving and drove at least 3 million people out of the country, according to NPR.

Seventeen Latin American countries, the U.S. and Canada denounced Maduro’s government as illegitimate when he was officially sworn-in for a second term on Jan. 10.

Maduro rejected the accusation, vowing to continue the legacy of the late President Hugo Chavez and accused the U.S. of trying to ignite unrest through its increasing economic sanctions.

“Venezuela is the center of a world war led by the North American imperialists and its allies,” he declared in a speech at the time. “They have tried to convert a normal inauguration into a world war.”

Maduro experimented with different career paths in his younger years, testing out rock music and driving a bus in Caracas.

He didn't have a ton of experience in politics, though he did learn a lot from his leftist father, a union leader, according to The Guardian. Following in his father's footsteps, Maduro organized a student union at his high school — which he reportedly never graduated from.

"He would address us during the assembly to talk about students' rights and that sort of thing. He didn't speak much and wasn't agitating people into action but what he did say was usually poignant," Grisel Rojas, a former classmate of Maduros and current principal, told The Guardian in 2013.

He's been playing commander in chief

Maduro, who lacks the military pedigree of his mentor, Chavez, has sought to shore up support from the armed forces by doling out key posts to top generals, including heading the PDVSA oil monopoly that is the source of virtually all of Venezuela's export earnings.

He has also been playing commander in chief, appearing last week at a military command meeting wearing camouflage fatigues and receiving the blessing of the defense minister, Gen. Vladimir Padrino Lopez.