Protesters and military forces clashed for the second day in Venezuela on Wednesday as both the country's disputed president, Nicolas Maduro, and opposition leader, Juan Guaido, vied for power.

Thousands of demonstrators took to the streets of Caracas as part of a rebellion that has so far been the most serious challenge to socialist Maduro's rule in the once-prosperous nation.

FORMER VENEZUELA U.N. DELEGATE: 'THIS IS A POINT OF NO RETURN'

“If the regime thought we had reached maximum pressure, they cannot even imagine,” Guaidó told supporters, according to Reuters. “We have to remain in the streets.”

Maduro took to the airwaves on Tuesday night to proclaim that the rebellion had been defeated, but that didn't stop Guaidó, who in a video tweeted Tuesday night urged the military to join with those seeking change in Venezuela.

So far, only one high-ranking officer and a small group of soldiers have broken publicly from Maduro. The leader of SEBIN, Venezuela's secret police, reprimanded Maduro in a letter he wrote to the Venezuelan people on Tuesday. Manuel Ricardo Cristopher Figuera said it's time to "rebuild the country."

Maduro on Tuesday was "ready" to up and flee the South American nation amid calls for his ouster, but Russia convinced him to stay, Secretary of State Mike Pompeo said on Fox News' "Special Report."

The U.S., along with around 50 other countries, believe that Maduro's most recent election was fraudulent and have argued that he's not the legitimate president of Venezuela. In addition to Russia, Cuba has also been in direct opposition to Guaidó, according to Pompeo.

GUAIDO 'DEMOCRATICALLY ELECTED' LEADER OF VENEZUELA, SAYS REGIONAL EXPERT: 'YOU CAN'T HAVE A COUP AGAINST A DICTATOR'

John Bolton, the Trump administration's national security adviser, said "there's a lot at stake here for the people of Venezuela but for the hemisphere as a whole."

He told Fox News that a big issue is that "people incorrectly refer to what Juan Guaidó is doing as a coup. He’s the legitimate president. He’s trying to take control of the government."

“The coup here has been by the Cubans and the Russians who have sort of grafted themselves on to Venezuela. I think they're running it in some sense more than Maduro is," Bolton said. The administration took the unusual step of recognizing Guaidó as interim president in January. 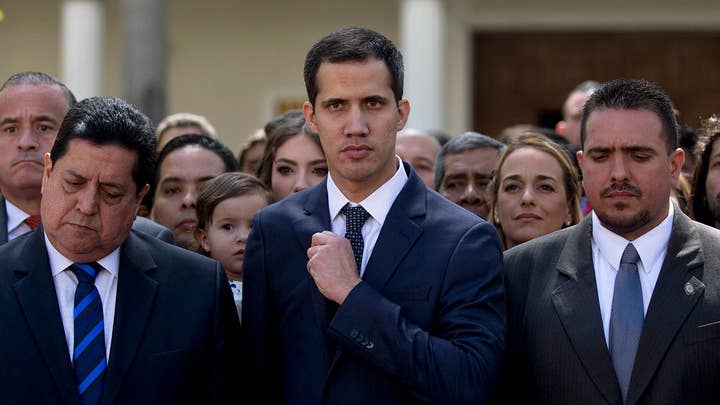 Before the demonstrations continued on Wednesday, President Trump threatened Cuba for their connection to Venezuela, warning them that he is not afraid to impose a "full and complete embargo" and sanctions on Cuba if its troops do not cease operations in the country. Bolton had previously alleged that Cuban troops were keeping Maduro in power in Caracas.

While the Trump administration stands with Guaido, it was reportedly caught off-guard on Tuesday by his decision to launch the campaign against Maduro. Elliott Abrams, the special representative for Venezuela, said the administration had expected major marches and protests to take place on Wednesday for the May Day holiday.