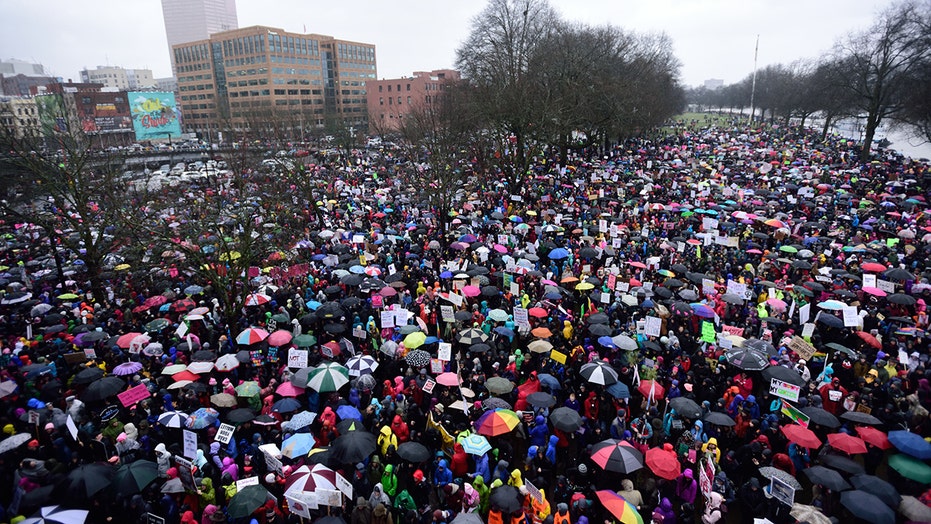 An organizer of the Women's March on Portland, Oregon in 2017 -- one of many events hailed as a rebuke of President Trump when throngs activists took the streets the day after his inauguration -- was indicted by a grand jury Tuesday over allegations she stole from the march itself.

Each theft count is for money of the total value of $10,000 or more, according to court documents obtained by the Oregonian/OregonLive.

Brewis was one of the organizers of the January 2017 march that drew up to 100,000 people to the streets of downtown Portland, according to FOX12.

Rebekah Brewis, an organizer of the Women's March On Portland in Portland, Oregon in 2017, was indicted by a grand jury Tuesday over allegations she stole from the march itself. (Alex Milan Tracy/Anadolu Agency/Getty Images)

After the apparent success of the march, however, organizers faced controversy the next month when thousands of dollars related to t-shirt sales and donations was discovered to be unaccounted for.

In a Facebook post at the time, event organizer Margaret Jacobsen said that Brewis agreed to have PDX Trans Pride act as "fiscal sponsor" so the Women's March could collect tax-deductible donations and raise money.

But an investigation by the Oregonian/Oregon Live revealed that PDX Trans Pride wasn't a 501c3 nonprofit with the ability to take tax-deductible donations.

Two years after attracting one million women from across the country, this year's event will be notable for what is not there: Democratic presidential candidates and many Democratic and liberal groups; David Spunt explains what changed.

The Oregon Department of Justice told the Oregonian/Oregon Live at the time it was looking into a complaint related to the missing money. Jacobsen later said that PDX Trans Pride later refused to account for the funds.

When asked for a comment about the unaccounted funds, Brewis told the newspaper in a phone message "The allegations are absolutely unfounded.”

A warrant had been issued for her arrest as of Tuesday, according to FOX12.

The Women's March has faced an uncertain future after accusations of anti-Semitism that have dogged the group’s organizers and led smaller rallies to be canceled in 2019.