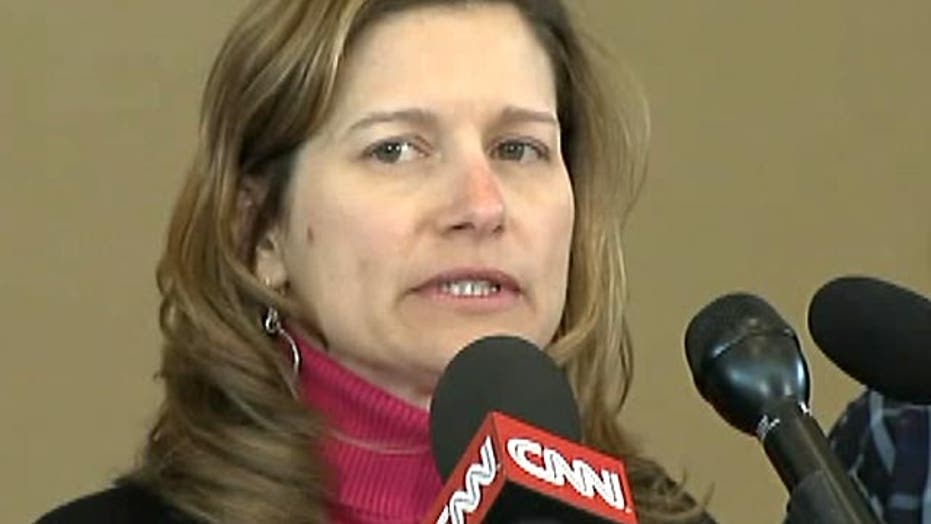 Mindy Corporon: 'I know that God did not do this'

The mother who lost both her teenage son and her father in the shootings at a Jewish community center near Kansas City said Monday she was relying on her faith to get through the losses.

“People keep saying, ‘How come you’re so strong?” Mindy Corporon told a press conference. “I’m strong because I have family and I have faith. I know that God did not do this.”

Corporon's 14-year-old son, Reat Griffin Underwood, and father, Dr. William Lewis Corporon, were among the three victims of Sunday's fatal shootings, allegedly by a 73-year-old Missouri man with a history of racist and anti-Semitic activity. The third victim was killed at a nearby Jewish retirement community.

Corporon also recalled how she pulled up to the Jewish community center moments after the shooting and discovered their deaths.

“When I pulled into the parking lot I saw that my dad’s truck was there and the doors were open. I wondered why my dad wasn’t just standing there,” she said. “As I pulled up, I saw that he was lying on the ground and my first thought was that he had a heart attack. He was just lying there.”

She said that soon after, she realized it was much worse.

“But it was very quickly that I realized that it wasn’t that and that my dad was in Heaven within seconds.”

Corporan added that she then ran over to a track, where she saw her son lying on the ground, as two men bent over him.

“They were holding him and I did not see him [Reat]. Just that he looked lifeless,” she said. “Someone named Mickey pulled me away and then I went into the Jewish community center and I saw the bullet holes in the glass and then it started to dawn on me what had happened.”

Authorities are investigating the shootings as a hate crime.

A Johnson County (Kan.) jail official told the Associated Press that authorities had identified the suspect in the shooting in Overland Park as Frazier Glenn Cross, aka Frazier Glenn Miller.

The Kansas City Star reported that Miller was booked into the Johnson County jail on suspicion of premeditated first-degree murder Sunday evening, but had not been formally charged. Authorities say they expect to have more information available on possible charges Tuesday.

A dispatcher with the Lawrence County Sheriff's Department told the Star Sunday that local authorities were working with Johnson County authorities and the FBI.

A woman who answered the phone at a number listed for Frazier Glenn Miller told the paper she did not know where he was and then started to cry.

The Southern Poverty Law Center reported on its website that it spoke to Miller's wife, Marge, by phone Sunday and she said police told her that her husband had been arrested in Sunday's attacks.

According to the law center, Miller has been involved in the white supremacist movement for most of his life. He founded the Carolina Knights of the Ku Klux Klan and was its "grand dragon" in the 1980s before the center sued him for operating an illegal paramilitary organization and using intimidation tactics against blacks. He later founded another white supremacist group, the White Patriot Party.

Miller, an Army veteran and retired truck driver, was the subject of a nationwide manhunt in 1987 after he violated the terms of his bond while appealing a North Carolina conviction for operating a paramilitary camp. The search ended after federal agents found Miller and three other men in an Ozark mobile home, which was filled with hand grenades, automatic weapons and thousands of rounds of ammunition. Miller tried running for the U.S. House in 2006 and the U.S. Senate in 2010.

Also at a news conference Monday, Overland Park police chief John Douglass said the shootings are being investigated as a hate crime

"In the last 22 hours, we learned the acts this person committed were the result of beliefs that he had and that he was trying to hurt somebody based on their ethnicity, race, and religion," said Michael Kaste, an FBI Special Agent in Charge.