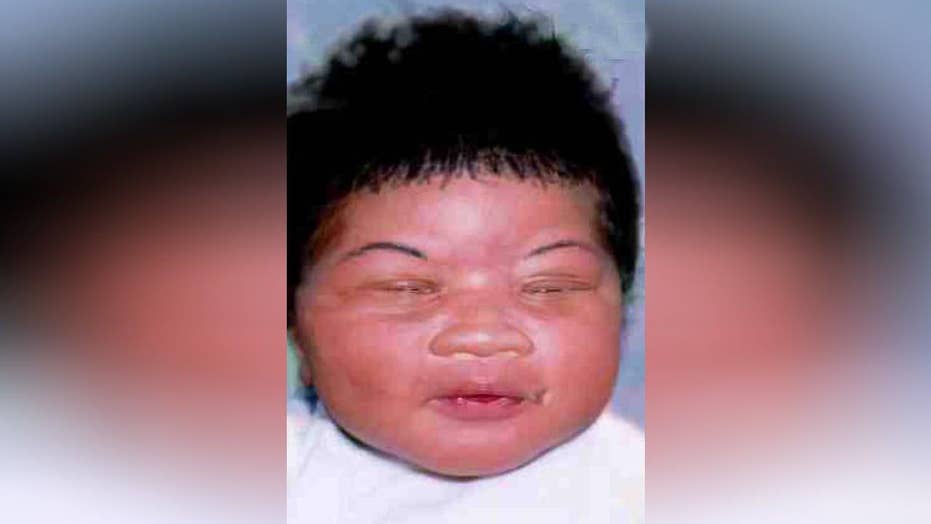 WALTERBORO, S.C. – Neighbors knew them for years as a church-going mother and her polite teenage daughter before police swarmed Gloria Williams' home in this small, quiet South Carolina city.

Williams, 51, was arrested on kidnapping charges. Then came the real shocker: Police identified the victim as the 18-year-old woman Williams had raised as her daughter. Investigators said DNA analysis proved she had been stolen as an infant from a hospital in Jacksonville, Florida.

"She wasn't an abused child or a child who got in trouble," a stunned Joseph Jenkins said of the young woman who lived across the street. "But she grew up with a lie for 18 years."

She grew up as Alexis Manigo, but has now learned she was born as Kamiyah Mobley. Jacksonville Sheriff Mike Williams described her Friday as being in good health but emotionally overwhelmed.

Tesha Stephens, a cousin of Willams', said the young woman had much to think about.

"She's probably going to have to take this day-by-day," Stephens told reporters outside Williams' home.

Mobley got to spend a few emotional moments with Williams, who is also charged with interference with custody, after her arrest. She cried "Momma" through the caged window of a security door after Williams waived extradition to Florida, according to WXJT-TV, which posted a video online.

Meanwhile, the young woman's birth family cried "tears of joy" after a detective told them their baby had been found. Within hours Friday, they were able to reconnect over FaceTime.

"She looks just like her daddy," her paternal grandmother, Velma Aiken of Jacksonville, told The Associated Press after they were able to see each other for the first time. "She act like she been talking to us all the time. She told us she'd be here soon to see us."

Mobley was only eight hours old when she was taken from her young mother by a woman posing as a nurse at University Medical Center. A massive search ensued, with helicopters circling the hospital and the city on high alert. Thousands of tips came in over the years, but she had disappeared.

Some months ago, the young woman "had an inclination" that she may have been kidnapped, the sheriff said. Authorities didn't say why she suspected this.

The case broke thanks to a tip received by the National Center for Missing and Exploited Children, said Robert Lowery, a center vice president. He would not say from whom the tip came.

But the center soon reached out to the cold case detectives at the sheriff's office, and Mobley provided a swab of her cheek for DNA analysis that proved the match, the sheriff said.

"This was something brand new to all of us," said Stephens, Williams' cousin.

The center has tracked 308 infant abductions since 1983 by nonfamily members in the U.S. Of those cases, 12 were still missing at the end of last month. That's now one number smaller.

The woman has been provided with counseling, the sheriff said. Meanwhile, Aiken is thrilled to know that they can speak with each other as much as they want.

"I always prayed, 'Don't let me die before I see my grandbaby'," said Aiken. "My prayer was answered."

The family never forgot the little girl ripped from her mother's arms that day in 1998.

Her mother, Shanara Mobley, told the Florida Times-Union newspaper on the 10th anniversary of the kidnapping that on every one of Kamiyah's birthdays, she wrapped a piece of birthday cake in foil and stuck it in her freezer.

"It's stressful to wake up every day, knowing that your child is out there and you have no way to reach her or talk to her," Mobley told the paper in 2008.

News moved quickly through the community of about 5,100 people early Friday after police cars swarmed Williams' home. Jenkins said he awoke to see officers searching the house and the shed around back.

"At the fish market, the hair dresser, the gas station, they're all talking about it," said Ruben Boatwright, who said he's known Williams for about 15 years.

Lakeshia Jenkins, Joseph's wife, said Williams and the girl would often come over for cookouts in the yard, or join their family at a nearby water park. Kamiyah seemed to be well cared for, and "Ms. Williams, she seemed like a normal person," Jenkins said.

"She went to work, came back here and went to church every Sunday," she said.

Williams also worked for the Department of Veterans Affairs' hospital in Charleston, volunteered in the area for Habitat for Humanity and lead the youth program at a Methodist church, she said.

"She's very intelligent, smart as a whip," Boatwright said. "All I can say are good things about her."