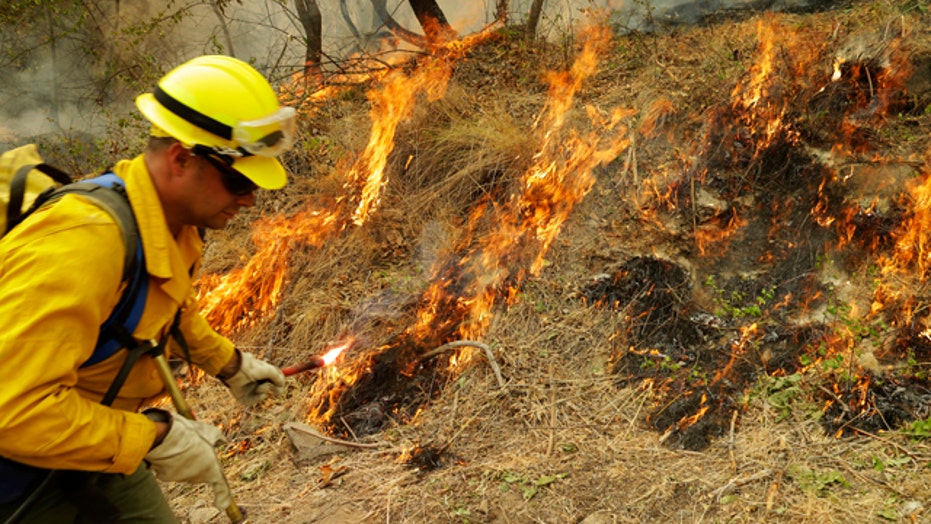 Fires have forced thousands to evacuate

BOISE, Idaho – This summer's massive fires have strained resources across the West to the point that wildfire managers are being forced to let some fires burn unchecked, and that has renewed a longstanding debate about whether it is better to fight a fire — or to sometimes just let it burn out.

Drought and heat have combined to make this one of the most active fire seasons in the Lower 48 in recent years. Nearly 29,000 firefighters are battling some 100 large blazes across the West, but it hasn't been enough. In northern Idaho, private citizens have even jumped on fire lines to help overwhelmed firefighters.

"What we're getting now are much more intense fires because of all those years of suppression," said John Freemuth, a Boise State University professor and a public lands expert. "Those kinds of intense fires are usually not allowed to burn."

But fire managers have little choice this year.

Some 11,000 square miles have burned so far. Most of that has been in Alaska, but an increase in fires in the Idaho, Oregon, Montana, Washington and California has caused competition for firefighting resources with some requests going unmet.

Some fires have simply been unstoppable. Steve Ellis, deputy director of the U.S. Bureau of Land Management, earlier this week flew over a 443-square-mile rangeland fire in southwest Idaho and said he could see where retardant bombers put in lines that the fire easily crossed.

"It's always tough when we get to this point where we have much more fire than we have resources," said John Segar, one of eight members on an interagency group based in Boise that decides how to deploy the nation's wildland firefighters. "The decisions are essentially triage decisions."

Segar, chief of Fire Management for the U.S. Fish and Wildlife Service, sits on the National Multi-Agency Coordination Group at the National Interagency Fire Center.

While there's been a longstanding debate about whether it's better to fight a fire or just let it burn out, Sager said conditions are so volatile right now that every current fire or new fire start is being attacked with the intent of putting it out if resources are available.

"It's just been too dry and too hot," he said. Letting fires burn "really hasn't been a consideration this year."

Freemuth said land managers have moved toward recognizing using fire as a tool to reduce fuels that lead to intense fires, particularly after the giant fires in Yellowstone National Park in the late 1980s.

"Having fire on the landscape in the right conditions has been accepted management now," Freemuth said.

But efforts to reduce the threat of fires have been hampered by a lack of money for prescribed burns or work to clear brush.

Some Western lawmakers, including Republican Sens. Mike Crapo and Jim Risch of Idaho and Democratic Sen. Ron Wyden of Oregon, have been pushing for letting firefighting agencies use dollars meant for natural disasters. Currently, agencies have been dipping into money set aside for fire prevention, such as prescribed burns.

"It's sort of an East-West issue where other members of Congress and other parts of the country don't get it because they don't see these kinds of fires," Freemuth said.

Even some Western residents don't want to allow beneficial fires to burn because of the smoke, he noted. "It's like two environmental values having to be reconciled — the need for the right kind of fire and the need for good air quality."

Arguments have also been made for decades that more logging to remove trees and grazing by livestock to mow down grasses could remove fuels that would otherwise burn.

"Those can be legitimate tools," Freemuth said. "But that gets to the question of what's the purpose of our federal lands. Other people are going to say the No. 1 purpose should be ecosystem health."

Segar said the fires this year will likely burn until a season-ending weather event with rain or snow arrives, which could be weeks.

"We have so much fire on the ground we don't have enough people to put them out," he said. "They'll go out at the end of the season."