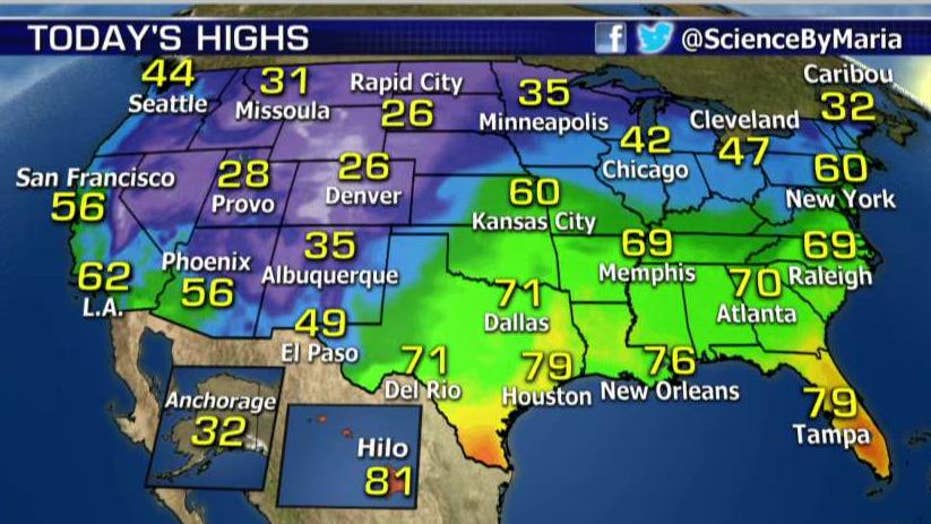 If the weather outside is out of whack, you can thank – or blame – an especially powerful El Niño, which will have the ultimate say in who gets a White Christmas and who can leave the ugly sweaters in the closet.

While November was relatively mild throughout the lower 48 states, recent days have seen spring-like weather in New York and Chicago, even as a massive winter storm barrels through the Northwest and Great Plains. And as different as the weather patterns are, they are both caused by El Niño, the unusually warm water on the surface of the Equatorial Eastern Pacific Ocean that forms every two or three years.

“The unseasonably mild air over the Eastern U.S., along with the cold air and snow across parts of the West, can historically be associated with an El Niño,” said Fox News Channel’s Senior Meteorologist Janice Dean. “The El Niño we're experiencing right now is particularly strong and could be among the strongest ever recorded.”

“The El Nino we're experiencing right now is particularly strong and could be among the strongest ever recorded.”

Right now, the jet stream pattern features a dip over the West, with a large ridge in the East that is allowing milder-than-average air to blow north from the Gulf of Mexico. So while the Pacific Northwest and parts of the Rockies are getting blitzed with snow, the East and parts of the Midwest are feeling downright balmy.

In the Northeast, people are strolling through New York’s Central Park in shorts and 70-degree weather. News video of a shirtless jogger in Chicago went viral, partly because running through the Windy City less than two weeks before Christmas typically requires snowshoes, and partly because he shamelessly shilled for dates.

But from the Plains to the Upper Midwest, Americans are either hunkering down or digging out from a massive snowstorm, with more on the way. The powerful winter storm, which blanketed the Sierra Nevada and the Cascades of the Pacific Northwest over the weekend, then buried parts of Utah, Colorado and Wyoming, will bring more heavy snow through Wednesday from the Rockies to the northern Plains and Upper Midwest.

Utah's first big winter storm of the season left behind about a foot of snow in most parts of the Salt Lake City area and as much as two feet in some higher spots. Utah Highway Patrol worked more than 400 accidents over the last two days as people struggled to get to work and school on icy, snow-packed roads.

National Weather Service lead forecaster Pete Wilensky told the Associated Press the worst of the storm has passed. Snow is expected in the mountains in central Utah on Tuesday, but the storm is winding down in northern Utah.

On Tuesday, Denver International Airport said about 300 flights were canceled after 7 inches of snow fell, and other flights have been delayed an average of more than three hours.

About 600 miles of Interstate highways in Colorado were snowpacked and icy, and chains or snow tires were required for many mountain roads.Multiple accidents were reported during the morning commute.

Much of the state was under a winter storm warning, with 12 to 20 inches of snow forecast in some areas and wind gusts expected to reach up to 45 mph, making travel hazardous.

On balance, it’s looking like a mild – and wet – winter, say experts. Meteorologists with the National Oceanic and Atmospheric Administration (NOAA) predict temperatures will most likely be above average for the West and the northern half of the lower 48 states and colder than normal in the Southern Plains and Southeast. But the sheer strength of this El Niño means things could change with little notice.

For the relative short-term, which includes Christmas, the current weather pattern looks to hold, said Dean.

“That's not to say that the rest of the winter will be this mild or without snow, for the East, or this cold and wet/snowy over the West, but for now it does look as though Christmas across the East will be much greener and warmer than years past,” Dean said. “Santa might want to pack a lighter coat and skip the hat and mitts.”