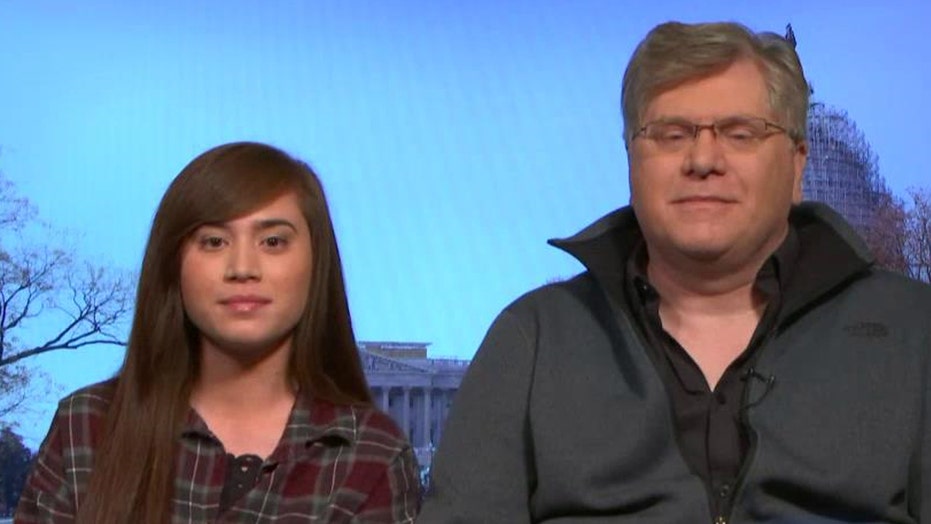 A petite 19-year-old Virginia woman who lifted a large burning truck off her father said Sunday that she just snapped into “super mode” to save his life.

Charlotte Heffelmire turned into a real-life 5-foot-6, 120-pound superhero when she rushed to her father’s aid Nov. 28. Eric Heffelmire was working on a pickup in the garage when a jack slipped, pinning him under the vehicle. The mishap also caused a gasoline spill which set the truck and the garage on fire.

“I guess he was in the garage for about 10 minutes before I really just stumbled on him,” Charlotte told "Fox & Friends." “I couldn’t hear anything. (I) kind of came into the garage and the garage was already on fire and really from there I kind of snapped into that whatever super mode I had at that point and kind of do what I had to do.”

The citation for a Citizen Life Saving Award she received Thursday from the Fairfax County Fire and Rescue Department says she was able to lift the truck twice to get her father free.

It also says she climbed into the burning truck and drove it out of the garage on three wheels, then closed the garage doors to help contain the fire and then went into the house and got everybody out, including her sister’s baby.

And while waiting for the fire department to arrive, she tried to keep the fire from spreading to the rest of their Vienna home with a garden hose.

Her father told Fox & Friends that while he was pinned underneath the truck he was thinking that he was a goner.

“It’s still pretty fuzzy for me,” he said. “The one thing I do remember is that first time that she tried to move the car I felt the weight shift a bit.”

He said there was a lot of smoke.

“The next thing I remember was when I was kind of regaining my bearings outside after she had gotten me out of the garage.”

Charlotte was a pole-vaulter in high school and has been appointed to the U.S. Air Force Academy.

She told "Fox & Friends" she doesn’t think she deserved the life-saving award.

“They almost made me believe that I deserved it, but I still don’t think that I do,” she said.

Her father was quick to disagree.

"I think she does and much more,” he said.