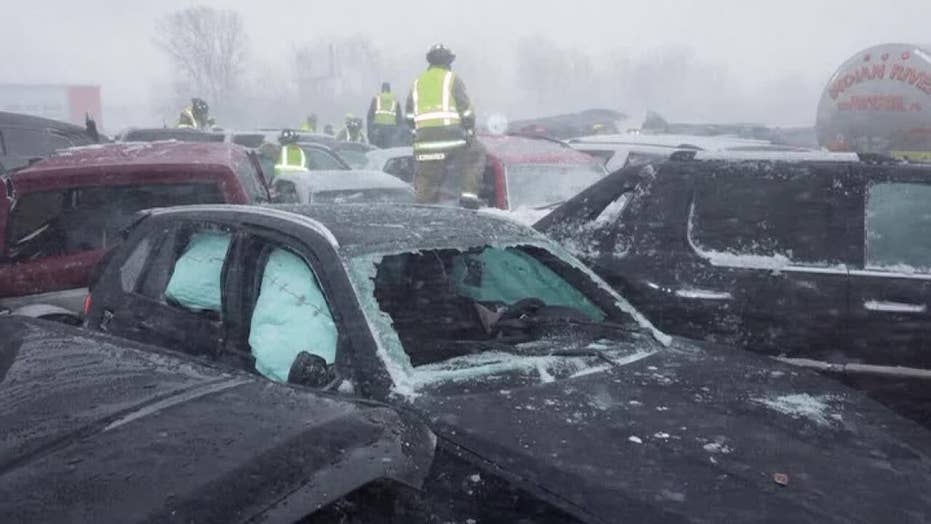 Officials in Wisconsin released video footage of a deadly pileup involving 131 cars — a collision thought by many to be "the largest traffic crash in the state's history."

Videos and photos from the Winnebago County Sheriff's Office show southbound Interstate 41 near Neenah at a standstill in whiteout conditions on Sunday. Sheriff John Matz said that a chain reaction crash left some vehicles at a "total loss and not drivable."

Andrew Schefelker, a 30-year-old science teacher, was killed in the crash, and 71 others who received a "multitude of injuries" were taken to nearby hospitals. Matz said first responders exercised a "mass casualty plan" in the aftermath of the pileup.

'ICE TSUNAMI' SPAWNED BY WINDSTORM SPURS EVACUATIONS ALONG LAKE ERIE, AS THOUSANDS WITHOUT POWER ACROSS EAST

During a seven-hour period on Sunday, the sheriff's office said it received 772 911 calls, "resulting in 108 calls for service."

Two women who said they were involved in the pileup told Fox affiliate WMSN-TV they "were a sitting duck" as they waited for help to arrive.

"We came around a corner, and it was just a total white wall of snow. You couldn't see five feet in front of you," Nicole Adrian told the news station. Susan Brugger added that they were on the phone with emergency officials when they were hit.

DRAMATIC 47-CAR PILEUP IN MISSOURI LEAVES AT LEAST ONE DEAD

"A semi jack-knifed and probably sent us 50 feet, and everybody (was) kind of juggling around," Adrian said. "You could tell we were jacked up in the air, and there was a car that was underneath our rear end behind us. There was no way to get out."

Officials said that one person was killed and 71 others were injured in the pileup on Interstate 41.  (Winnebago County Sheriff’s Office via AP)

Brugger added that first responders used the "jaws of life" to rescue them from the car. A firefighter shouted, "There's two people in here and they're still alive." It was to Brugger  "a surreal moment" she'll not soon forget.

Wisconsin State Trooper Chris Splinter told the news station that the whiteout conditions seen on Interstate 41 on Sunday are common for this time of year, He said he wasn't surprised by the number of vehicles involved because of how dangerous the driving conditions were.

"The vehicles coming up behind them can't stop fast enough because they're following too close or going too fast for the conditions, and then they start just piling into one another," Splinter said. "It's almost like they're just driving into a wall of cars, just like they're driving through whiteout conditions."