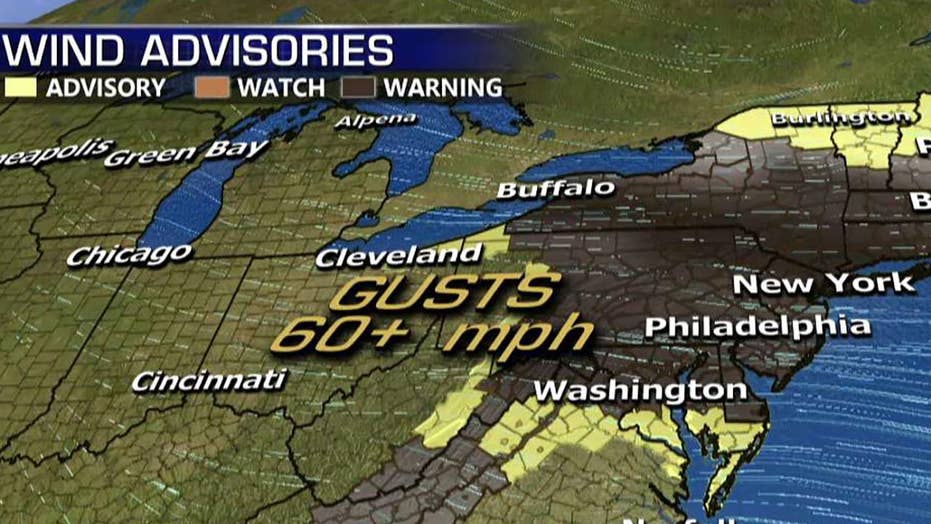 High winds causing chaos across the eastern half of the country with power outages and travel delays have created another problem: a literal wall of ice.

The windstorm created an "ice tsunami" Sunday across parts of New York along Lake Erie, pushing large chunks of ice along lakeshore areas.

The Niagara Parks Police Service posted video to Twitter showing the chunks of ice stacked up along the Niagara River Parkway along the lake, forcing the roadway to be closed in some sections.

"Strong winds blowing ice over the retaining wall from the lake," the agency said. "Drive with caution."

Others shared photos of the ice tsunami on the other side of the Niagara River in Canada, calling it an "incredible sight."

"This ice tsunami is one of the craziest things I've ever witnessed," David Piano wrote. "Starting to bulldoze trees and street lamps."

High winds had raised water levels on the eastern end of Lake Erie in a phenomenon known as a seiche and then, according to the New York Power Authority, driven ice over a boom upstream from the river. The National Weather Service in Buffalo warned that winds along neighboring Lake Ontario could reach 75 mph, causing "extensive damage to trees and power lines, widespread power outages, and property damage to roofs and siding."

"This is a particularly dangerous situation! If you must travel be prepared for extensive damage and downed power lines," the agency said.

Large ice mounds can be seen at Hoover Beach along Lake Erie in New York on Sunday. (Town of Hamburg Emergency Services)

The ice tsunami along the Hoover Beach area of Hamburg, New York spurred a voluntary evacuation for residents there.

"Residents in Hoover Beach can expect the Woodlawn FD to come door to door accounting for residents," town officials said in a Facebook post.

The ice mounds spurred an voluntary evacuation for residents in Hoover Beach on Sunday. (Town of Hamburg Emergency Services)

Ice mounds between 25 and 30 feet high could be seen in photos approaching people's homes.

"We've had storms in the past but nothing like this," Hoover Beach resident Dave Schultz told WGRZ. "We've never had the ice pushed up against the walls and right up onto our patios... it's in my patio, the neighbor's patio, and the patio after that."

The weather system generating the strong winds toppled trees and fallen branches took out power lines across the region Sunday and into Monday as winds gusted to 60 mph or higher.

The ice tsunami was between 25 and 30 feet high on Sunday. (Town of Hamburg Emergency Services)

Wind speeds of 74 mph — hurricane strength — were reported in Tucker County, West Virginia, on Sunday night and New York on Monday. A speed of 61 mph was recorded at the Pittsburgh airport.

Wind advisories and warnings are in effect through Monday in the mid-Atlantic and Northeast due to the "very slow moving" system, according to Fox News Senior Meteorologist Janice Dean.

"We also have the potential for some snow across the Great Lakes, and with those wind gusts blizzard conditions are going to be of big concern," Dean said Monday on "FOX & friends."