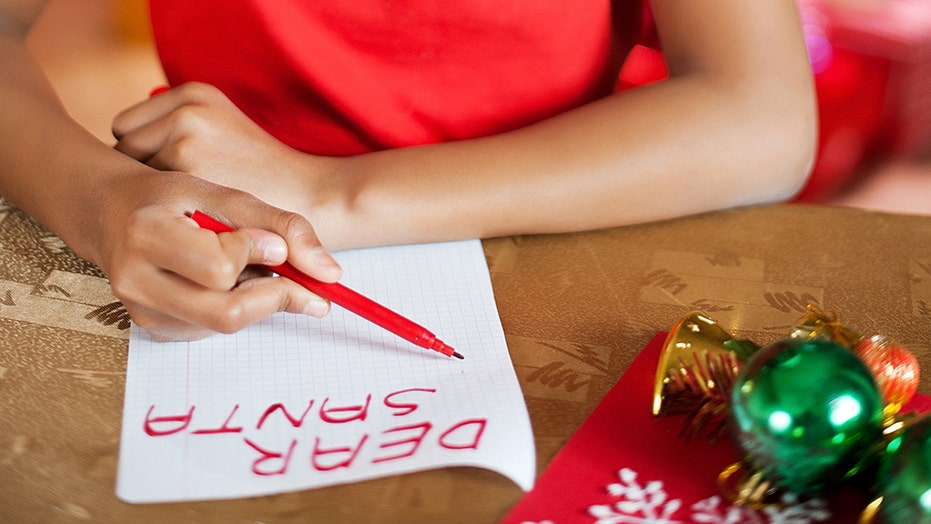 Is it too soon to celebrate Christmas?

Should Christmas decorations go up before or after Thanksgiving? Todd Piro hits the streets to find out.

The U.S. Postal Service is getting into the holiday spirit with "Operation Santa."

Launched on Monday across the country, the agency hopes to help children and families in need get the items they want — like toys, or winter coats and shoes — this holiday season by posting their "Dear Santa" letters online.

GERMAN SANTA CLAUS IS ANSWERING CHRISTMAS MAIL BEFORE THE HOLIDAY

The program works like this: Anonymous donors look through kids' letters and "adopt" any that interest them. Next, those who are feeling festive and generous purchase items the children have asked for, before they package them and bring them to a participating Post Office.

Letters posted online by the Postal Service show a variety of potential gifts to give. A child named Gavin asked Santa for "Harry Potter Lego sets" and Ana wants "hamster stuff." Oscar wants a MacBook Pro, but also a pet lizard. Rhen asked for toys, but also a new coat.

Alex, who said the "number one priority is for my family to be safe forever," also requested an unlimited data plan and a new iPhone.

Children have asked Santa for a variety of gifts this year, including Nintendo Switches, MacBook laptops, and even a pet lizard. (iStock)

Angelina, who wrote to ask Santa how the weather was in the North Pole and apologized for bothering him, said she would love toys for her and her two sisters for Christmas. She said they want a Nintendo Switch, and said they'd be good children and won't ask for anything next year.

Nintendo Switches appear to be a hot gift this season, as Samuel asked for one, too. He admitted he "got in trouble a lot more than I expected" this year, but asked for the video game console with Fortnite.

The Postal Service receives "thousands" of letters each year that children send to Santa Claus and the North Pole, specifically: Santa Claus 123 Elf Road, North Pole 88888. The agency says their mission "is to answer these letters."

While this is the first year the operation is available to everyone in the U.S., the festive holiday program isn't new. "Operation Santa" first began in 1912, and was opened to the public in the 1940s. In 2017, the USPS began the online program in New York, and in 2019 opened to program to anyone in the U.S.

Those looking to participate in "Operation Santa" can visit the Postal Service's website for more information.