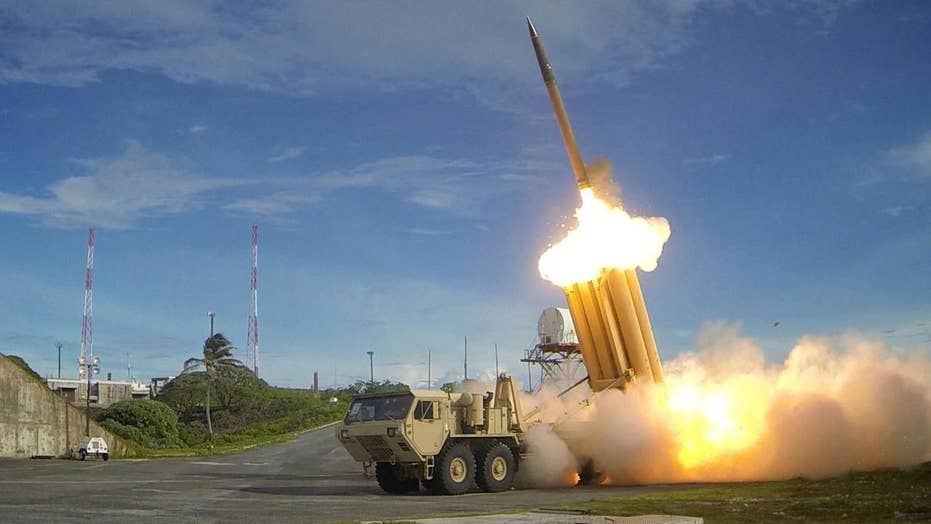 US tests anti-ballistic missile system in response to NKorea

The Missile Defense Agency successfully shot down an intermediate-range missile over the Pacific using a THAAD system; Jennifer Griffin reports for 'Special Report'

The U.S. is set to conduct another missile defense test this weekend, with the latest exercise based on a remote Alaskan island and coming amid the growing ballistic missile threat from North Korea.

A notice put out by the U.S. Coast Guard last week warns of “hazardous operations,” saying “The Alaska Aerospace Corporation is conducting a rocket launch from the Kodiak Narrow Cape Launch Facility, located on Kodiak Island, Alaska.” They are warning vessels to steer clear of several areas between Alaska and Hawaii during the launch which is scheduled for July 29.

“What is unimaginable to me is allowing a nuclear weapon to land in Denver, Colo. My job will be to develop military options to make sure that doesn’t happen.”

— Chairman of the Joint Chiefs of Staff Gen. Joe Dunford

Department of Defense spokesman Lt. Col. Chris Logan declined to comment on the plan or its connection to the ongoing threat from North Korea. The U.S. has conducted a spate of successful missile intercept tests in recent months as Pyongyang has executed offensive missile testing.

“We continue to monitor North Korea, but are not going to comment on matters of intelligence,” Logan told Fox News.

That test took place one week after North Korea test-fired an Intercontinental Ballistic Missile (ICBM) on July 4. That was the regime’s most successful test, leading to the concern that it has the capability to reach the United States.

"I couldn't be more proud of the government and contractor team who executed this flight test today," said Missile Defense Agency Director Lt. Gen. Sam Greaves after the successful test. "This test further demonstrates the capabilities of the THAAD weapon system and its ability to intercept and destroy ballistic missile threats. THAAD continues to protect our citizens, deployed forces and allies from a real and growing threat."

THAAD systems have been placed in Guam and South Korea to counter missile threats from North Korea, whose leader, dictator Kim Jong Un, has become increasingly belligerent in recent months.

“Kim Jong Un’s regime is tied to nuclear program, and what I can tell the American people today is North Korea is capable of launching a limited missile attack,” Chairman of the Joint Chiefs of Staff Gen. Joe Dunford said Saturday. He was answering questions at the 2017 Aspen Security Forum in Aspen, Colo. He went on to say “The United States military can defend against a limited North Korea attack on Seoul, Japan and the United States.”

Regarding possible military options against North Korea, he said that would be “horrific” and that the loss of life would be “unlike any we have experienced in our lifetimes.”

Fox News' Lucas Tomlinson at the Pentagon contributed to this report.