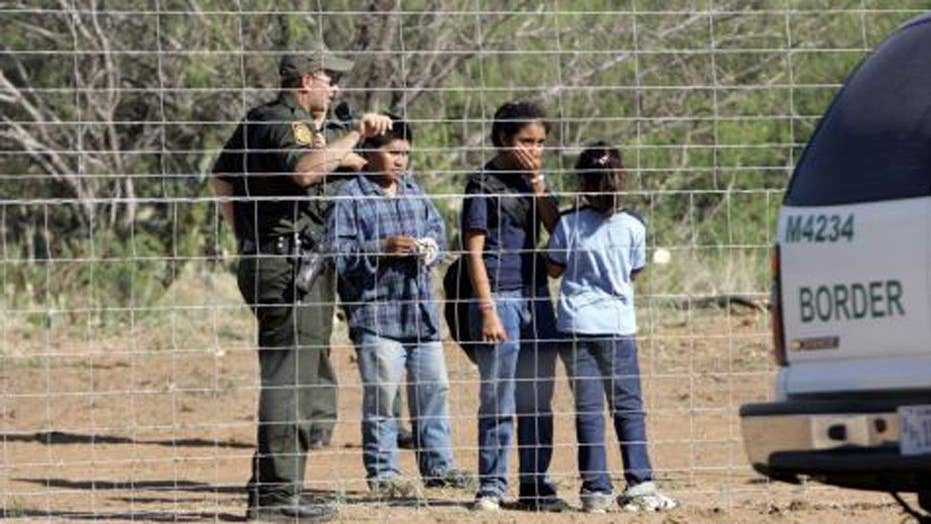 The number of families and unaccompanied children apprehended on southern border has skyrocketed, according to new Obama administration stats. David V. Aguilar, the former Deputy Commissioner of U.S. Customs and Border Protection, goes 'On the Record'

A surge of unaccompanied children coming across the southern border could be swelling the ranks of one of America’s most dangerous gangs, either as fresh recruits or hardened sleepers, according to federal authorities.

Some 227,149 unaccompanied children have been apprehended at the border over the last six years, according to the U.S. Border Patrol. They remain in federal custody until a sponsor can be located, at which time they are often sent to communities where they are ripe for recruitment by Latin gangs such as the infamous MS-13.

“Our safety standards have increased,” Andrea Helling, spokeswoman for the U.S. Department of Health and Human Services, told FoxNews.com. “In the last few months screening procedures of children and sponsors has increased in their intensity which we hadn’t done previously.”

MS 13 started in the prisons of El Salvador, but has spread throughout the continent. (Associated Press)

Federal law requires the Department of Homeland Security transfer children under 18 to the custody of Helling’s agency until they are released to an appropriate sponsor, usually a relative, while their immigration cases are adjudicated. Some observers say that, at the least, the process sends a steady stream of loosely supervised youths lacking in language and coping skills right into the waiting arms of criminal gangs. At worst, the unaccompanied minors were already initiated into the gangs before they arrived at the border.

MS-13 is believed to be among the largest street gangs on New York’s Long Island, and more than 250 members have been convicted on federal felony charges since 2003. Federal prosecutors there have pinned more than 20 murders on the violent gang.

Meanwhile, over the last year, Long Island has received 2,093 unaccompanied children, and between October 2013 and July 2016, all of New York received 12,478 children from Central America. The overwhelming majority of the kids are not criminals and likely have competent sponsors. But some are.

In June 2015, MS-13 members and El Salvadoran immigrants Jose Cornejo, 17, Bryan Larios, 18 and Joel Escobar, 17, all of Brentwood, N.Y. were charged with the brutal rape of a 16 year-old girl on a local golf course.

Earlier this week, Joshua Guzman, 15, was shot and killed in the Long Island city of Hempstead. While not an unaccompanied immigrant, the boy’s father, Raul Guzman, told Newsday his son was under pressure to join a gang. Police believe his murder may be related.

MS-13 has a foothold in numerous other communities, where unaccompanied minors are being sent. Texas, which has seen a spike in MS-13 crime has received 15,999 over the same period. The 2015 Texas Department of Public Safety Gang Threat Assessment found MS-13 boasts some 800 members, and authorities explicitly blamed the flood of unaccompanied children being placed in the state.

“The influx of illegal alien gang members crossing the border into Texas in 2014, along with reports of extremely violent murders committed by its members in the Houston area, positions the gang as one of the most significant gang threats in the state for this upcoming year,” the report stated.

Other areas that have seen an influx in MS-13 crime are Maryland, Texas, and Virginia. Fairfax County, Va. has seen a 160 percent increase in MS-13 related incidents through April compared to the previous year.

Helling said HHS is looking more closely at the sponsors who step forward to take custody of the minors.

“Our responsibility is providing a safe place for these children,” she said.

She said that high-risk children who may have been identified as gang members by DHS would likely be placed in either a staff secure or secure-juvenile detention facility. But even if they are not gang members when they come into the U.S., the risk remains that they could fall prey to recruitment efforts.