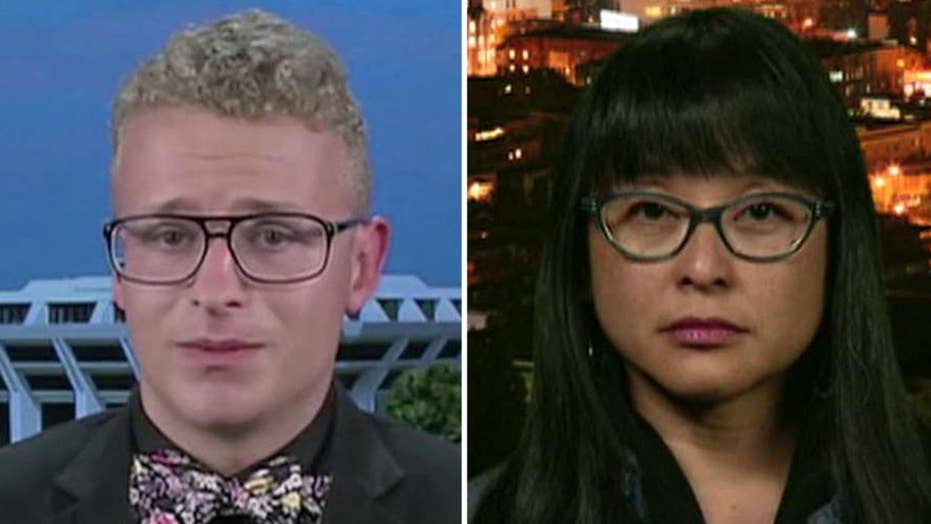 The former president of the Berkeley College Republicans at the University of California, Berkeley said Wednesday he is suing a prominent member of an Antifa group for allegedly threatening and harassing him and others on campus.

Mark Meuser, one of the lawyers representing Troy Worden, announced the lawsuit seeking more than $100,000 of damages against Yvette Felarca in a press release, The Washington Examiner reported.

Felarca is the leader of By Any Means Necessary (BAMN), an Antifa, or anti-fascist, group.

“Felarca filed a frivolous restraining order that restricted Worden's First and Second Amendment rights and made it difficult for him to move around the campus to attend classes. The restraining order was dismissed on Oct. 27, 2017," Meuser said.

In a previous interview with Fox News, Worden he's had to face months of "talking, harassment and even violence," along with other UC Berkeley College Republicans (BCR).

“I have to look behind my shoulder whenever I am on campus and especially when I am engaged in political activism,” Worden said.

“The No. 1 public university in the world and the so-called ‘birthplace of the free speech movement’ is anything but. It is the place where America’s conservative youth are daily under threat of violence, lacking the support of the university administration, police, or city," he added. "The Free Speech Movement is dead, and the left has killed it.”

BCR members told Fox News they are being targeted by Antifa, including Twitter "doxxing," a practice of publishing personal information online.

Felarca was charged this summer by the Sacramento County District Attorney’s Office with assault and inciting and participating in a riot for an incident in 2016 where she was filmed hitting a man at a protest, the East Bay Times reported.

The lawsuit filed Wednesday also targets her attorney, Shanta Driver, who is the National Chair and founder of the organization BAMN.

"Felarca and her attorney attempted to make free speech expensive, and it is time that they pay for their misuse of the court system," said Meuser.

The attorney representing Felarca in the latest legal action told the East Bay Times the motion filed by Worden was “frivolous.”

“Troy Worden is a stalker,” Ronald Cruz of Oakland-based United for Equality and Affirmative Action Legal Defense Fund told the newspaper. “This motion is his attempt to use the courts to continue stalking Ms. Felarca. He stalked Yvette Felarca and it’s all on the record. The First Amendment does not give Worden the right to stalk people, or to violate a restraining order and be in Felarca’s face and take video of her for 30 minutes, which Worden did after the court commanded him to stay away.”