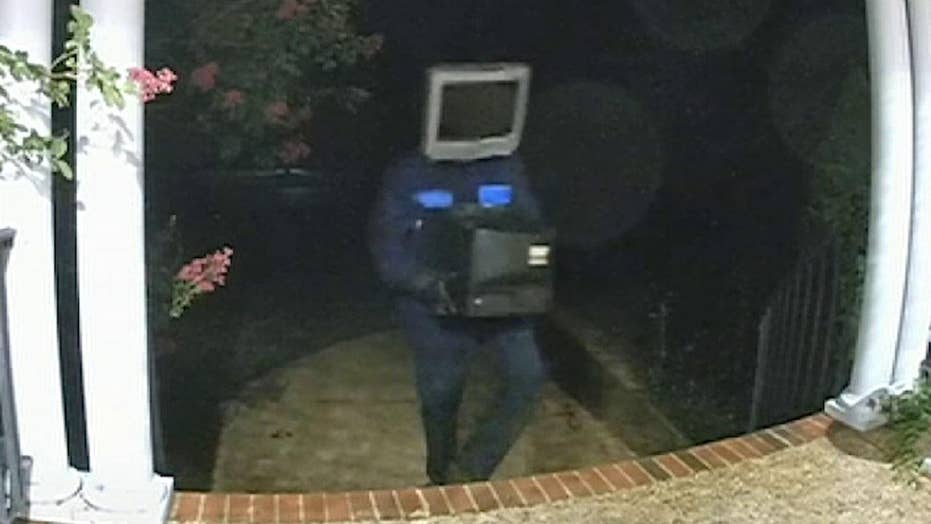 Video footage shows a suspicious person wearing a television over their head and placing television sets on front porches in Henrico, Virginia.

In a close encounter of the strangest kind, a mysterious person wearing a vintage TV on his head was caught on surveillance camera over the weekend leaving old television sets at homes throughout a Virginia neighborhood.

Residents of more than 50 homes in Henrico County woke up Sunday morning with a tube-style television sitting on their front porches, the Richmond Times-Dispatch reported. Many confused residents checked home security cameras and discovered footage of the bizarre delivery.

“It was a guy dressed in a jumpsuit with a TV for a head," resident Adrian Garner told Richmond station WWBT-TV. "It’s the weirdest thing. He squats down, puts the TV there and walks off."

“He wants to be known as the TV Santa Claus, I don’t know," Jim Brooksbank told WTVR-TV. "Maybe TV man was just ready to strike and put a little humor in our lives."

Police Lt. Matt Pecka said there may have been more than one masked man dropping off the televisions. Officers went from house to house and collected most of the unwanted sets, WTVR-TV reported.

The neighborhood faced a similar incident last year when more than 20 old television sets were left outside homes, the station reported. It wasn’t immediately clear whether the incidents were connected.

Police told the Times-Dispatch it's yet to be determined if a crime was committed.