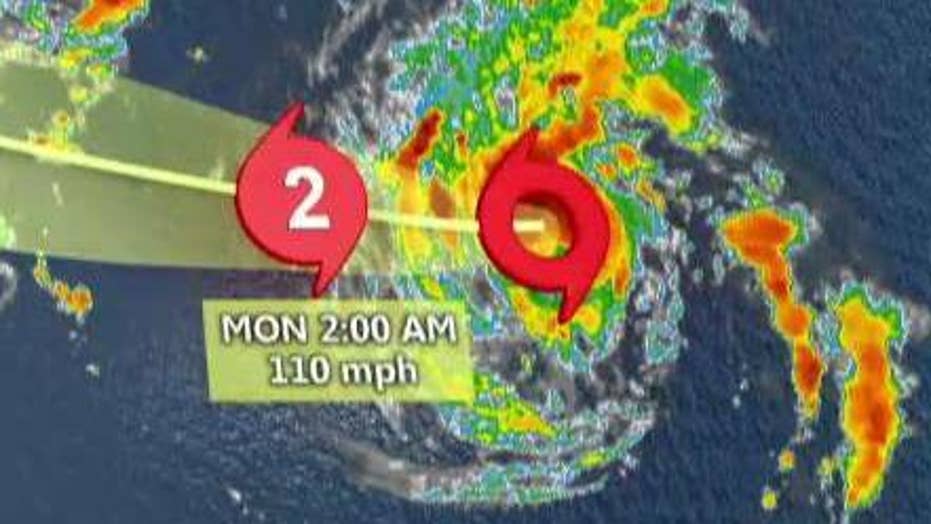 Florence predicted to strengthen into a category four hurricane as it approaches the East Coast of the United States.

Tropical Storm Florence continued pushing toward the U.S. Southeast late Saturday, with forecasters predicting it will become "a dangerous major hurricane" posing "risk of direct impacts" by next weekend.

But the National Hurricane Center cautioned that it was still too early to predict the "exact timing, location and magnitude of those impacts."

The NHC did, however, advise officials from northern Florida up through North Carolina to monitor Florence's progress and have emergency-response plans in place.

In an 11 p.m. ET Saturday update, the NHC located Florence southeast of Bermuda, coursing westward at 6 mph with maximum sustained winds of 70 mph.

Ahead of the storm, governors of both North and South Carolina declared states of emergency. Virginia's Gov. Ralph Northum added his emergency declaration Saturday.

The step helps free government resources to provide emergency aid and other assistance in response to the storm.

North Carolina Gov. Roy Cooper made his announcement Friday and also signed a transportation waiver that would allow farmers to harvest and transport their crops more quickly.

“While it’s still too early to know the storm’s path, we know we have to be prepared,” Cooper said in a news release. “During harvest, time is of the essence. Action today can avoid losses due to Florence.”

Describing the storm as being “very unpredictable,” McMaster said the state would take cautionary measures.

In Virginia, Northam said that while the impacts of the storm remained uncertain, they could include flooding, high winds and a possible storm surge.

The governor urged residents to assemble an emergency kit with food, water, medication, pet supplies and important documents. Coastal residents should also check what hurricane evacuation zone they live in.

Meanwhile, two other storms -- Helene and Isaac -- were following behind Florence in the Atlantic, but those storms were expected to be less of a threat to the U.S., forecasters said.