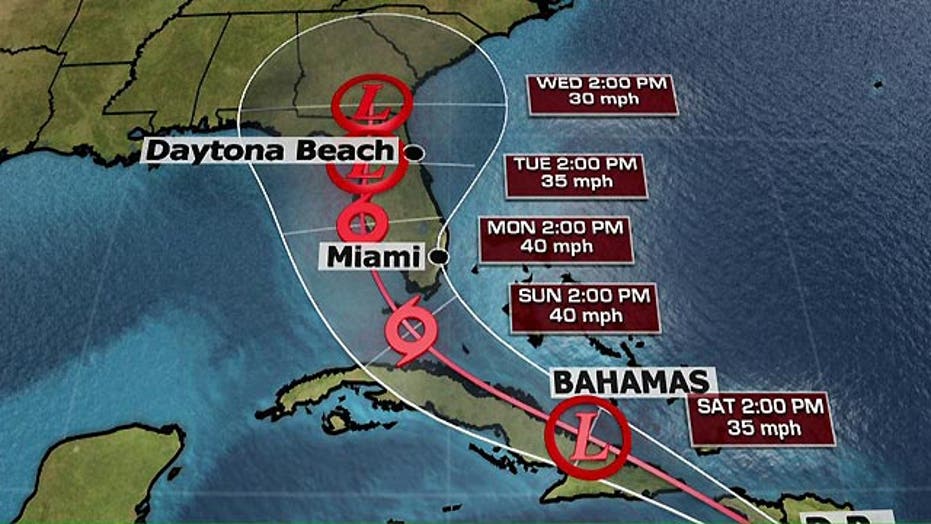 Florida governor declares state of emergency ahead of Erika

Tropical Storm Erika was losing its powerful punch as it drenched Haiti and the Dominican Republic early Saturday, but it left devastation in its path, killing at least 20 people and leaving another 31 missing on the Caribbean island of Dominica, authorities said.

The U.S. National Hurricane Center in Miami said that mountains and an unfavorable environment would likely knock Erika below a tropical storm force, though there was a small chance it could recover as it moves along Cuba and then approaches Florida late Sunday.

Dominica Prime Minister Roosevelt Skerrit said in a televised address late Friday that damage inflicted by the storm set the island back 20 years. About 15 inches of rain fell on the mountainous island.

"The extent of the devastation is monumental. It is far worse than expected," he said, adding that hundreds of homes, bridges and roads have been destroyed. "We have, in essence, to rebuild Dominica."

At least 31 people have been reported missing, according to officials with the Barbados-based Caribbean Disaster Emergency Response Agency. The island’s airports remained closed, and some communities remained isolated by flooding and landslides.

Skerrit asked people to share their resources with each other as foreign aid trickles in.

"This is a period of national tragedy," he said. "Floods swamped villages, destroyed homes and wiped out roads. Some communities are no longer recognizable."

Erika still carried enough force to knock out power to more than 200,000 people in Puerto Rico and cause more than $16 million in damage to crops there, including plantains, bananas and coffee.

While the storm was stumbling over the Dominican Republic and Haiti, John Cagialosi, a hurricane specialist at the center, warned that people in Florida should still brace for heavy rain, said "This is a potentially heavy rain event for a large part of the state," he said.

Florida Gov. Rick Scott declared a state of emergency for the entire state and urged residents to fill gas tanks and stockpile food and water as the storm churns closer. Erika is a particularly wet storm and is moving across a region that has been struggling with drought.

Across the region people heeded the governor's warning. WSVN reported a steady stream of customers were purchasing necessities at grocery stores and taking out extra cash from ATMs, just in case. One grocery store manager told the station that the store had 30 pallets of water ready to be sold, while another said he restocked shelves seven times between noon and 5 p.m. Wednesday in anticipation of the rush.

"Well, just got the last couple of cases of water," customer Ted Jimenez told the station, "got plenty of food, a freezer full of food, two generators, hurricane impact windows. We even got a propane stove."

In Broward County, just north of Miami, the cities of Hollywood and Hallandale Beach announced they would distribute sandbags Friday and Saturday to residents concerned about possible flooding. Water officials said workers had begun setting up pump stations in Hollywood to keep water levels low ahead of the storm surge.

"We can't wait until we see where it's actually going to hit," Jeff Kivett of the South Florida Water Management District told WSVN, "so we started our preparations."

Other cities, such as North Miami Beach began work to keep storm drains clear ahead of the expected deluge. Public works trucks were sweeping and cleaning the streets Thursday, while other crews trimmed trees and uprooted coconut palms.

The exact track of Erika still remains unclear. As of Friday evening, the storm was about 95 miles west-southwest of Santo Domingo, Dominican Republic, and was moving west at about 21 mph with maximum sustained winds of 50 mph, according to the U.S. National Hurricane Center in Miami.

Forecasters said Erika might fall apart over Hispaniola. The catch is that if the storm weakens as it passes over Hispaniola, which is constituted by Haiti and the Dominican Republic, that could leave it susceptible to trade winds that would push Erika directly in line with South Florida.

Meanwhile in the Pacific, Jimena turned into a powerful Category 3 hurricane with maximum sustained winds near 125 mph, and the Hurricane Center said it was likely to be near Category 5 status soon, though it did not pose an immediate threat to land.