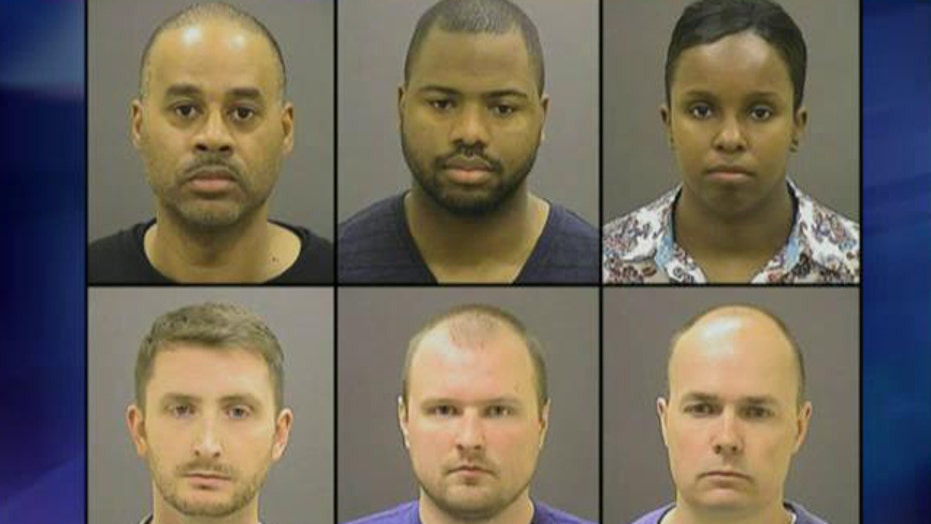 Can Freddie Gray officers get a fair trial in Baltimore?

A judge denies change of venue request for police officers accused in death of black man who was in their custody. Griff Jenkins and the 'On the Record' legal panel take a closer look

A judge has ruled the trials of six Baltimore police officers charged in connection with the death of Freddie Gray, a 25-year-old black man, will be kept in Baltimore, WBFF reports.

Attorneys for the officers had argued they would be unable to get a fair trial in the city due to media coverage of the case and the city’s $6.4 million settlement with Gray’s family.

According to WBFF, protesters cheered outside the courthouse, "The trial stays here.” At least one protester was arrested.

Chief Deputy State's Attorney Michael Schatzow has called the argument Baltimore residents can’t be impartial “insulting,” and told Judge Barry Williams on Thursday that the only circumstances under which a change of venue is appropriate is in "a small community where you have an armed lynch mob at the door,” the AP reports.

One officer, Caesar Goodson Jr., is accused of second-degree depraved heart murder. The charges against the other officers include misconduct, manslaughter and assault.

Gray died after suffering a spinal injury in custody. His death triggered protests and rioting on the day of his funeral and comes amid national outcry against police brutality and racial profiling.

The trial has been set for October. The officers have pleaded not guilty.