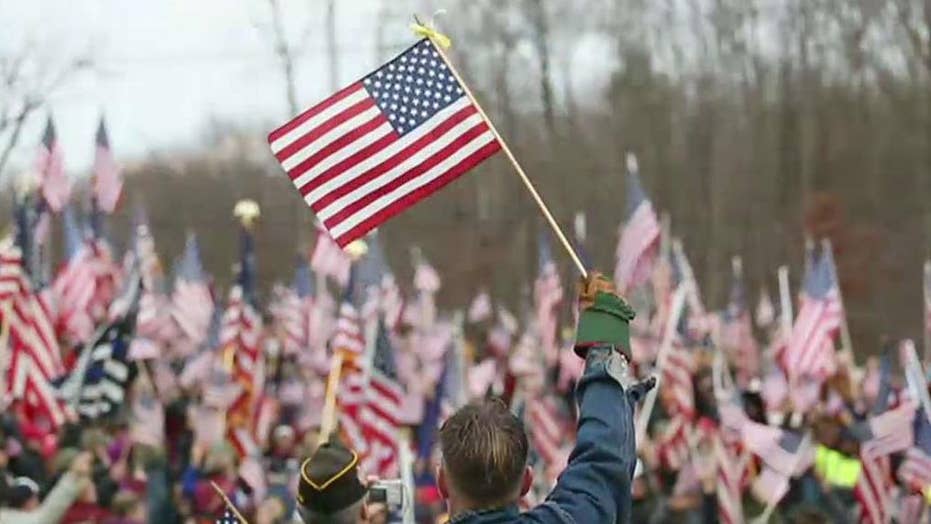 Jesse Watters asks the folks of Amherst, Massachusetts about an American flag dispute at Hampshire College on 'The O'Reilly Factor'

A Mississippi town rallied Saturday after its mayor said he was forced to remove a Christian flag following the threat of a lawsuit by an atheist organization, WREG reported.

More than 100 supporters united at the Veterans Memorial Park in Rienzi, where the group waved Christian flags – a red cross on a blue background in the upper left corner of an all-white base.

"I never dreamed that something like this would have happened in a town this small, but it happened," Rienzi Mayor Walter Williams told the station.

Riding alongside bikers in Corinth proudly waving Christian flags - they want it back up at the veteran's memorial in Rienzi. @3onyourside pic.twitter.com/F6AuvPRVPu

"We're gonna fly that flag again," he said, "and I'm hoping it's not going to be long" before it happens.

Williams said he removed the Christian flag after receiving a letter from the Freedom from Religion Foundation that stated a $500,000 lawsuit could be filed against him if the town did not remove the flag.

“I’m telling you folks I’m no preacher. But it’s going to get worse; can I get an Amen? It’s going to get worse, but we cannot bow down. We can’t lay down if we stand up till our death, that’s what we need to do,” said event organizer Kevin Nelms, according to WCBI. "There just comes a point in time when you've got to be politically incorrect and take a stand," said Nelms.

During the rally, supporters returned a Christian flag to the flagpole where it once flew.

"As a proud American, but No. 1 as a proud Christian, I came today to stand up for the Lord and stand up for our freedom," said Susan Woodruff.

Williams said the town has hired an attorney and will discuss its next steps regarding the flag at a meeting scheduled for Feb. 7.