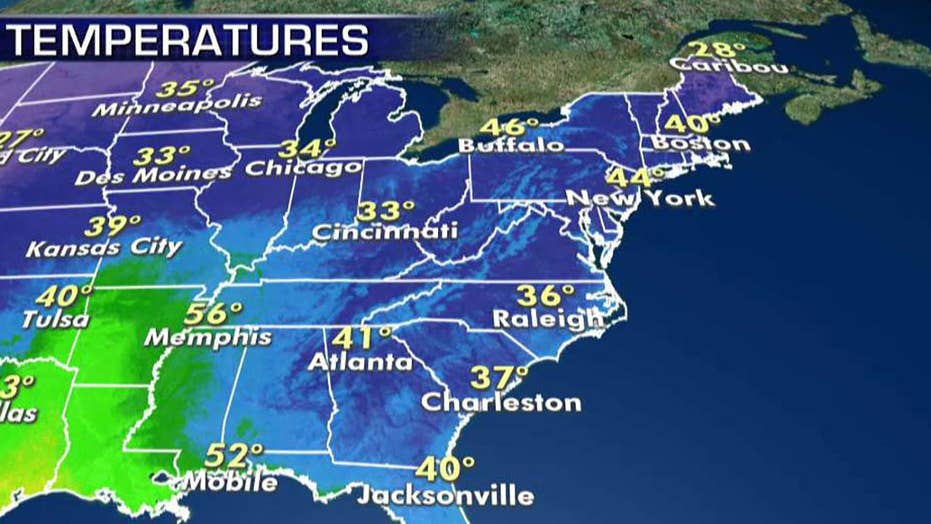 Janice Dean has your FoxCast and a look at Cracker Barrel's tiny store on wheels to celebrate their 50th anniversary.

A pair of powerful winter storms are expected to hit the U.S. this week, bringing a mix of rain, snow and wind that could make Thanksgiving travel miserable for millions of people across the country.

The first storm system is expected to dump heavy snow in parts of the Midwest on Tuesday and bring gusty winds to the East Coast by Thursday — just in time for the Macy’s Thanksgiving Day Parade.

A second storm, brewing in the Pacific, is expected to wallop the West Coast on Wednesday with heavy snow in parts of California and Oregon.

Two winter storms were expected to bring heavy snow, wind and rain to much of the country this week, officials said. (National Weather Service)

“This is not an ordinary storm,” the National Weather Service (NWS) warned.

Here’s what to know about this week’s severe weather from coast to coast as holiday travel gets underway.

California and the West Coast:

At least a foot of snow is expected in the mountains of northwest California and southwest Oregon, creating dangerous driving conditions, the NWS said.

The storms’ snow and wind will combine to create “treacherous travel conditions” and likely cause disruptions across parts of the U.S., the agency said.

A tractor-trailer flipped over on Highway 58, east of Oakridge, Ore., under snowy and windy conditions Monday. (The Register-Guard via AP)

The Oregon Cascades was forecast to face strong winds of up to 45 mph and 1 to 2 feet of snow, a mix that will reduce visibility to near zero.

In Southern California, a flash flood watch has been issued from San Diego to Santa Clarita, where 2 to 3 inches of rain are expected from Wednesday through Friday.

As the storm moved across the Rockies and the Midwest, forecasters predicted snow accumulations of at least 6 inches in parts of Wyoming and Colorado, northeast into the central Plains and upper Michigan near the Great Lakes.

The heavy snow and winds will “significantly reduce visibility, with near blizzard conditions possible in the Plains,” the NWS said.

Northern Colorado has already been buried under 2 feet of snow and about a foot has fallen in southern parts of Wyoming.

Long stretches of Interstates 70 and 76 in Colorado and Interstate 80 in Wyoming were closed due to the winds and snow.

More than 450 flights out of Denver International Airport were canceled Tuesday, and airport officials said more cancellations were likely.

In Minnesota, forecasts showed a foot of snow could cover the Twin Cities. Air travel could be affected out of Minneapolis airport.

After pummeling the West Coast and moving across the Midwest, the system will arrive on the eastern coast Wednesday or Thursday, and its gusty winds might affect the Macy’s Thanksgiving Day Parade.

Parade organizers were preparing for the possibility that they’ll have to ground the iconic balloon characters, given 40-50 mph gusts in the forecast.

Rules put in place after several people were injured by a balloon years ago require lower altitudes or full removal if sustained winds exceed 23 mph and gusts exceed 34 mph. The decision will be made on parade day.

Traveling on roads this week:

The NWS urged travelers from coast to coast to stay off the roads during the storms and to plan alternate routes.

AAA predicted the second-highest number of Thanksgiving travelers in more than a decade this holiday week, with more than 55 million people traveling at least 50 miles from home.

The Transportation Safety Administration is predicting record numbers at airports.