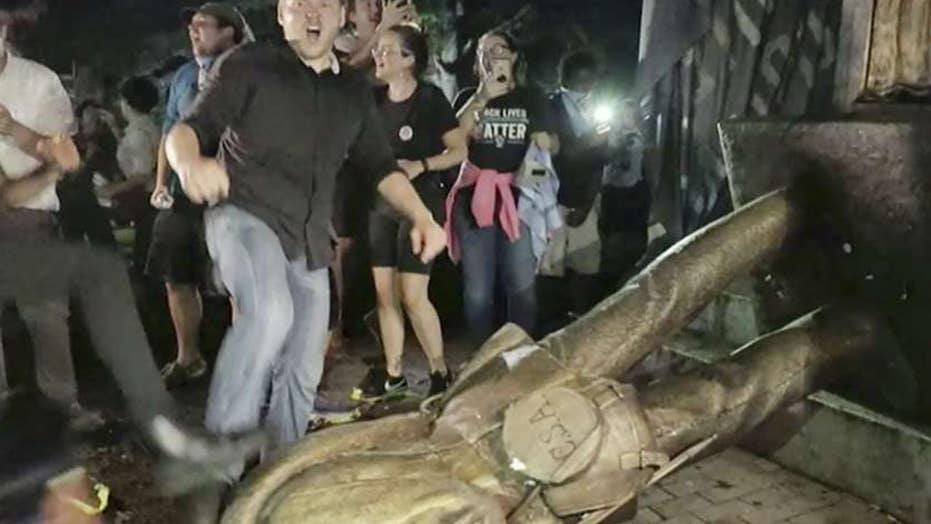 A police chief assisting with crowd control during a protest at the University in North Carolina last week told his officers to stand aside as demonstrators tore down the century-old Confederate monument known as “Silent Sam,” a report stated.

WRAL-TV obtained text messages and emails that showed Chapel Hill Police Chief Chris Blue closely monitored the Aug. 20 protest as his officers backed up the UNC police force, who took lead in policing the Chapel Hill campus. The station used a public records request to obtain about 400 pages of emails and texts to and from Blue on the day of the protest and the day afterward.

The messages showed Blue instructing the officers to give the protesters “lots of space” and “stay way out.” Another message showed Blue telling Chapel Hill officers they were “too close” to the protesters. Not too long after, the demonstrators toppled the "Silent Sam" statue.

Blue received several messages after the protest criticizing how his officers handled the incident. Still, Blue emailed his officers a day later and thanked them for their “good work during a challenging time.”

The actions by UNC campus police are also under scrutiny from university and legislative leaders. The UNC police have primary responsibility for patrolling campus, but the two departments assist each other.

Police stand guard after “Silent Sam” was toppled by protesters on campus at the University of North Carolina in Chapel Hill, N.C. (AP)

Thom Goolsby, a UNC Board of Governors member, said officers were “highly derelict in their duty by standing back and allowing these outside criminal elements to riot and destroy state property,” the Herald-Sun reported.

Protests over the statue have flared in the past year with many decrying the memorial as a symbol of a racist heritage. The protest on Aug. 20 began with a series of speakers before the crowd moved to the quadrangle. Then, about two hours into the protest, a group surrounded the statue and pulled it down. Once on the ground, demonstrators kicked it and cheered.

Raul Jimenez, who was accused of helping pull down the statue, said on Thursday that the community brought it down with "a righteous show of people power" after university leaders declined their pleas to lawfully remove it. He made the statement during a brief appearance in court on misdemeanor charges of rioting and defacing a public monument.

No injuries were reported during the protest. Three people face misdemeanor charges of rioting and defacing a public monument.