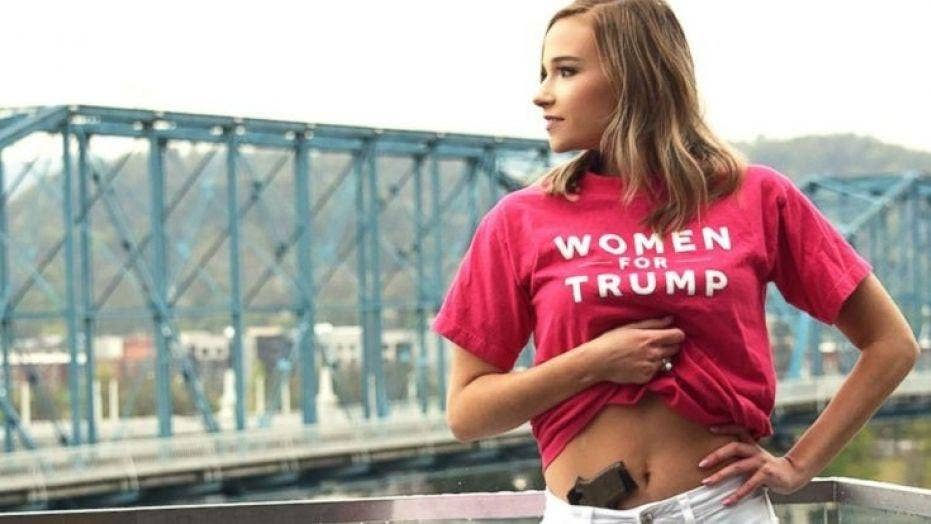 A Tennessee college senior is sticking to her guns after being criticized for this graduation photo, in which she poses wistfully with a firearm.

A Tennessee college senior is sticking to her guns after posting a graduation photo in which she stares wistfully off-camera while lifting her "Women for Trump" T-shirt to expose a handgun in her waistband.

Despite receiving what she called a surprising "amount of hate" on social media, Brenna Spencer, 22, says she has no regrets.

“I know the Tennessee state gun codes. ... I carry everywhere that I’m allowed to carry," the University of Tennessee, Chattanooga student said in an interview.

On Twitter, where Spencer's profile states that "political correctness offends me," she posted the provocative photo with the caption "I don’t take normal college graduation photos ..."

The post quickly went viral, with some complimenting the shoot and others calling it reckless.

One woman, Victoria Silva, alerted the police in an apparent attempt to have Spencer arrested.

"@ChattanoogaPD would you like to give us your two cents?" Silva tweeted. "Per the thread, this young female is taking a photo w/ a firearm, in an area w/ a posted “no-weapons” policy. This showboating behavior is irresponsible, reckless, & potentially dangerous."

The photo was reportedly taken outside the Hunter Museum of American Art in Chattanooga, which bans firearms inside.

Others were supportive -- and offered some tips to the soon-to-be-grad.

"Good job supporting second amendment, but you should have a proper holster that holds the weapon securely and fully protects the trigger guard," a Twitter user wrote in response to the photo.

Spencer responded promptly: "I do! I have a belly band on it’s just not seen in the photo!"

Spencer, who is set to graduate with a communications degree, says she owns several guns and works for Turning Point, a conservative nonprofit.