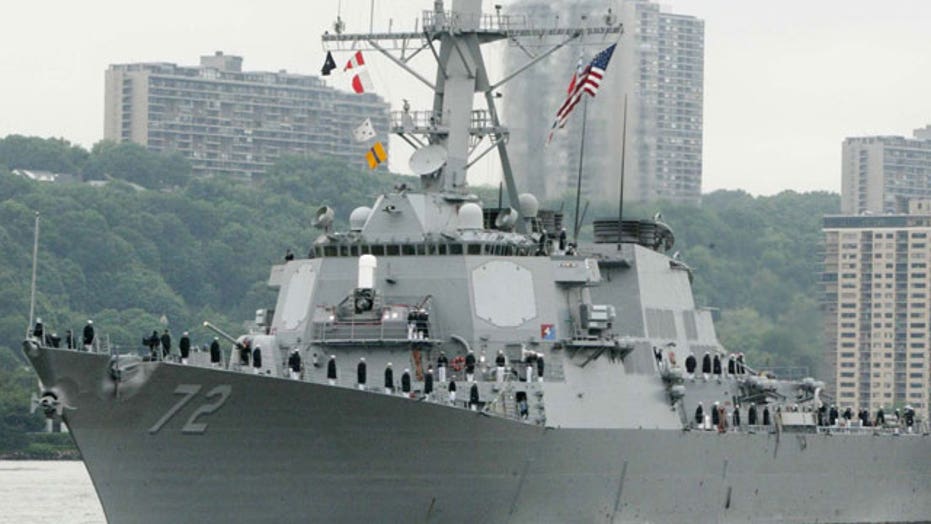 The civilian suspected of fatally shooting a sailor aboard a docked destroyer in Virginia late Monday disarmed a petty officer who was on watch and did not use his own weapon, the Navy says.

A Navy news release Tuesday said the man approached the USS Mahan late Monday night at Naval Station Norfolk and was confronted by ship security personnel. The Navy said a struggle occurred, and the civilian disarmed the petty officer, and used the weapon to fatally shoot a sailor. The news release added that Navy security forces then killed the suspect.

The suspect was a civilian who had access to be at the base, according to base spokeswoman Terri David. She said she couldn't say whether he had permission to be on the USS Mahan, where the male sailor was shot about 11:20 p.m. Monday. No other injuries were reported.

The Navy will release both men's names once their families are notified, Davis said.

Davis said the scene of the shooting is secure. The base -- the largest naval installation in the world -- was briefly put on lockdown after the shooting as a precaution, but that was later lifted.

Operations had returned to normal at the base Tuesday morning, with counselors available, the Navy said in a news release. But most enlisted sailors on the Mahan — docked at the first of 13 main piers — were not to report to duty Tuesday. Base traffic was typical Tuesday morning.

Sailors gathered for a training session -- unrelated to the shooting -- and began with a moment of silence for their colleague. "We'll find out what happened, and we'll prevent that from occurring again," Adm. Bill Gortney, commander of U.S. Fleet Forces Command, based in Norfolk, told them.

To get on the base, civilians must be escorted or have a pass. Authorized civilians can include Department of Defense employees, contractors and military family members. Davis would not elaborate on how the suspect was authorized to get on base.

Each base entrance is guarded, and all 13 piers have additional security forces. As part of ongoing security efforts, handheld ID scanners were implemented this year at Navy bases in the region, including the Norfolk station.

The shooting, which was under investigation, comes just months after a September incident at the Washington Navy Yard, in which a gunman -- identified as a contractor and former Navy reservist -- killed 12 civilian workers before being shot to death.

The shooting also comes about a month after the Navy held anti-terrorism and force protection exercises around the world, including an active-shooter drill at Naval Station Norfolk.

In February, Capt. Robert E. Clark Jr. became Naval Station Norfolk's commanding officer. He took over for Capt. David A. Culler Jr., who was set to retire in May. Clark had served as the installation's executive officer since 2012.

The Mahan, commissioned in 1998, has a crew of about 300 officers and sailors. In September, it returned to Norfolk after a deployment of more than eight months that included being positioned in the eastern Mediterranean Sea for a potential strike against Syria.