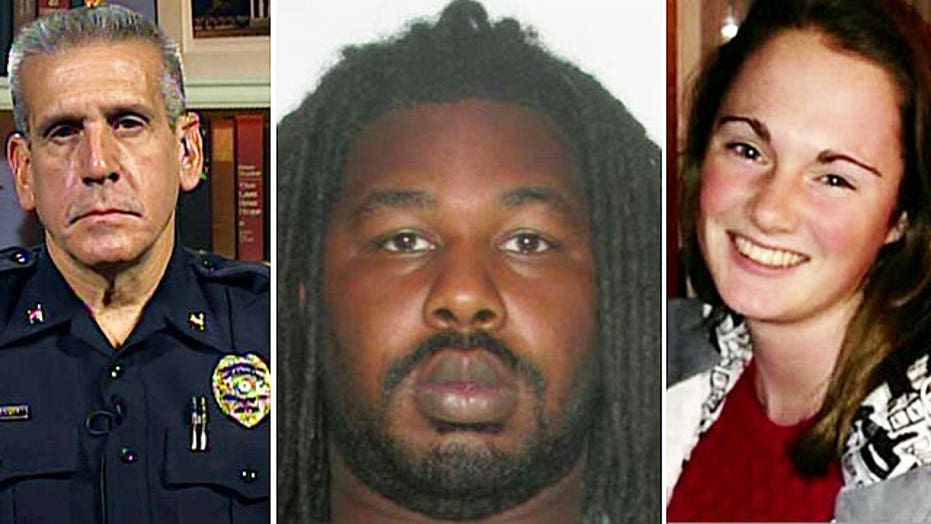 A man charged with abducting a missing University of Virginia sophomore was captured Wednesday afternoon in Texas and is awaiting extradition to Virginia, but there is still no sign of the student, authorities said.

The capture came less than a full day after police announced they had probable cause to arrest Matthew on charges of abduction with intent to defile Hannah Graham, an 18-year-old sophomore who vanished on Sept. 13 in Charlottesville.

Longo told "Fox and Friends" Thursday that Matthew has not provided any new information in the case. He said authorities "have no idea where she is" at a Thursday afternoon press conference.

Matthew was captured at a beach in the sparsely populated community of Gilchrist around 3:30 p.m. after police received a call reporting a suspicious person, the Galveston County Daily News reported.

The newspaper quoted Galveston County Sheriff Henry Trochesset as saying a deputy responding to the call found a man who had pitched a tent on the beach with his car parked nearby. Trochesset said a check of the car's plates revealed it was the vehicle sought in connection to the case. Authorities were trying to get a warrant to search the car, he added.

Matthew was being held Thursday morning in Galveston County.

The case has spread fear through Charlottesville, a quiet community about 70 miles west of Richmond.

Graham met friends at a restaurant for dinner on Sept. 12 before stopping by two parties at off-campus housing units, authorities said. They said she left the second party alone, and sent a text message to a friend saying she was lost.

Surveillance videos showed her walking, and at some points running, past a pub and a service station and then onto the Downtown Mall, a seven-block pedestrian strip where police believe she entered a bar with Matthew.

The latest revelations came late Tuesday, when police, who have searched Matthew's car once and his apartment twice, decided they had probable cause to charge him in the disappearance. Longo declined to say what new information police had, but authorities sent several items, including clothing, to a state forensics lab for testing.

The university said Matthew had been employed at the University of Virginia Medical Center since Aug. 12, 2012, as a patient technician in the operating room. He attended school at Liberty University in Lynchburg where he played football from 2000 to 2002. The school's athletics website listed him as a defensive lineman on the football team.

The charges against the 6-foot-2, 270-pound Matthew surprised Dave Hansen, who first met him about 11 years ago when Hansen served as an assistant pastor at an area church.

"I always thought he was a gentle giant, just a nice guy," Hansen said. "He seemed genuine with his faith and spirituality. ... I don't see him doing this at all, but that's usually the case, I guess."

Hansen said he's only kept up with Matthew through Facebook, but ran into him at the university's medical center within the last year. He said the soft-spoken Matthew greeted him in an elevator with a high-five.

More recently, he also served as a part-time volunteer for the football team at The Covenant School, a private Christian pre-kindergarten through 12th-grade school in Charlottesville. Officials said his involvement with the school began last month following interviews with the athletic director and head football coach, as well as normal background and reference checks.

After Matthew was named a person of interest in Graham's disappearance, school officials said in a letter that he will "no longer be working with our football program while this matter is being clarified and resolved."

While Matthew has had past brushes with the law, the details of those cases are not clear.

Online court records show Matthew was convicted of trespassing in 2010 but provide no details about the incident. Details also were unavailable for two other charges of assault and attempted grand larceny relating to a 2009 incident that were not prosecuted. Matthew, who had a taxi permit from the Virginia Department of Motor Vehicles from 2007 through 2010, also has several traffic infractions, records show.