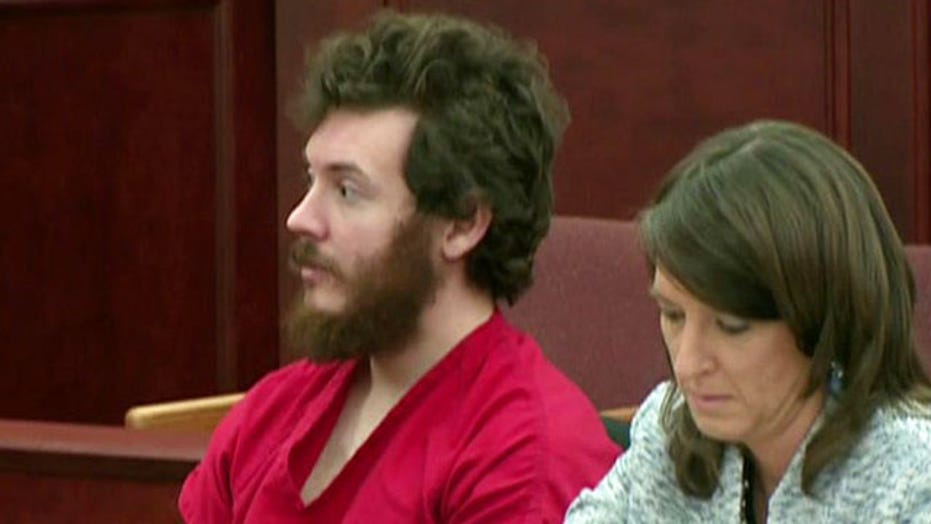 The American Civil Liberties Union joined a growing chorus of groups Monday in support of a FoxNews.com reporter who faces jail time in Colorado over her refusal to reveal her sources in an exclusive report on the Aurora shooting massacre.

Jana Winter reported in July 2012 that the suspect, James Holmes, sent a notebook to his psychiatrist that foreshadowed the mass shooting inside an Aurora movie theater that killed 12 people and injured 58 others. Winter, citing two unnamed law enforcement officials, reported that the notebook was "full of details about how he [Holmes] was going to kill people."

A Colorado judge has since subpoenaed Winter, compelling her to reveal her sources and claiming the unnamed law enforcement officials violated a gag order. Holmes' defense claims the revelation jeopardizes their client's right to a fair trial, though the court on Monday delayed a ruling until it reviewed whether the notebook would be admitted as evidence.

The ACLU on Monday said it would be "very concerned if any coerce steps were taken toward this reporter."

"There's a good reason why 49 states have laws that make it very difficult for parties in a case to subpoena reporters and demand their testimony about their sources," Ben Wizner, an attorney with the ACLU, told FoxNews.com.

"Without confidential sources, the public would be deprived of very important information. It’s not an absolute right, but in this case, it doesn’t seem like an investigation into the source of an unauthorized leak is sufficient justification to compel this reporter’s testimony," Wizner said. "My view of this might be different if the defense had a good argument that their client couldn’t get a fair trial.

"It is both a First Amendment issue and an issue under Colorado law," he added. "This doesn’t seem like it rises to the level of being able to break this reporter’s promise to her source.”

The Society of Professional Journalists, a national media organization, told FoxNews.com it is monitoring Winter’s situation closely, and its legal team is awaiting Wednesday’s outcome to see what if any action can be taken.

“We support any journalist’s right to use the shield law,” Sonny Alvarado, president of SPJ, said. Winter "should be protected by the law instead of being persecuted by the law.”

He added that SPJ’s Freedom of Information Committee is expected to weigh in on the matter before Wednesday.

Another organization,  the National Press Club, came to Winter’s defense on Friday, urging the court to drop the case against her.

"Courts have the right to enforce the confidentiality of investigations, and that may in some cases require punishing leakers," National Press Club President Angela Greiling Keane said in the statement. "But attempting to get that information by subpoenaing reporters in order to learn their anonymous source goes too far. It jeopardizes a value of greater significance. If anonymous sources believe their identities can be dredged up in court, they will be less likely to disclose to the press information of vital public importance. That’s not a risk worth increasing."

Coverage of Winter’s situation has be garnering more media attention, including from Columbia Journalism Review, published by Columbia University's journalism school, from which Winter graduated in 2006.

As Winter’s hearing on Wednesday draws near, professional media organizations have also come to her defense.

Two separate affidavits were filed this week with the Arapahoe County Court, by the Colorado Press Association and the Colorado Broadcasters Association supporting Winter’s motion for protective order and to quash the subpoena.

“The members of the CPA rely on the protections afforded by Colorado’s Press Shield Statute … every day, in publishing information on a wide variety of matters of public concern,” Samantha Johnson, executive director of the Colorado Press Association, said in her sworn statement. “A court order compelling Ms. Winter to divulge her confidential sources would hamper the ability of reporters, across the state, to gather the information necessary to perform their watchdog function.”

“Indeed, the mere fact that Ms. Winter has been subpoenaed in this case has already chilled newsgathering in connection with this case,” Johnson added.

“The people of Colorado have benefited, and continue to benefit greatly, from the free flow of information provided by CBA member stations as a direct result of the robust protection provided to state journalists by the Colorado Press Shield statute,” his statement reads.

“Any diminution in the protections afforded to Colorado-based journalists under the Colorado Press Shield Law would have far-reaching and deleterious impact on the ability of reporters, editors and news producers at CBA’s member stations to obtain information from knowledgeable sources and to transmit that information to the public."

Winter will be back before the judge on Wednesday. She has said she will not divulge her sources and she could be sentenced to up to six months in jail if she is found to be in contempt of court.