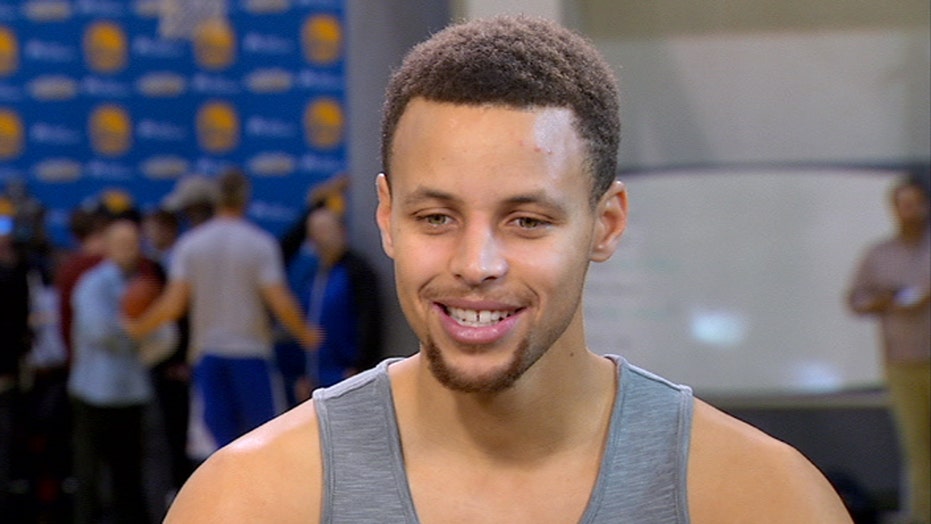 What’s the first thing people think of when they hear the name Steph Curry?

1: He is the greatest shooter in the National Basketball Association right now and perhaps in its history. (He’s averaging 29.8 points a game this season and 6.6 assists. He’s already made 245 three-pointers, or nearly five per game. Last year he was named the NBA’s Most Valuable Player and he is a three-time NBA all-star.)

2: He’s the star of the Golden State Warriors and the reason his team is winning. (He’s led the Warriors to a stunning 48-4 record this year, the best 52-game start in NBA history.)

The man behind all of these athletic accomplishments, however, will surprise a lot of basketball fans and casual onlookers alike (although devoted fans know how often he points upward after he makes one of his famous jump shots).

Far more spiritual and a richer, deeper person than his skills on the boards would suggest, Curry is a person of deep faith.

"I remember it like it was yesterday, the day I gave my life to Christ," he told the Fellowship of Christian Athletes for its magazine not long ago. "I was in fourth grade, and I recall hearing and understanding the gospel of Jesus Christ and walking down the aisle to give my life to Him."

After that moment, Curry said, his life completely changed. "My parents continued to pour into my faith from that point on, making sure I understood the commitment I'd just made," he said.

His father, Dell Curry, played 16 years in the NBA; his mother encouraged him to give an outward sign to God to acknowledge the greater power in his life.

Curry, 27, who is 6'3" and 190 pounds, explained his journey to the NBA this way: "I knew the Lord was preparing me for a bigger stage to represent and be a witness for Him on the basketball court. I remembered my mom telling me from day one at Davidson (College, where he played for three years) that God puts His people in different arenas of life so that they can reach more people for Him. I tried to use that time for His glory."

Even with the status he has achieved so far in pro basketball, and no matter what great work he continues to deliver either in the All-Star Game on Sunday night or well beyond, he is not finished yet.

"God has given me talents to play basketball for a living, but I still have to work hard to improve every day," he told the magazine. "I know that in the grand scheme of things, this is just a game that can be taken from me at any moment."

Nancy Hedrick, executive vice president of communications and marketing at the Fellowship of Christian Athletes, noted that Curry realizes his sports hero status and "the platform that God has given him with that."

"In our sports-crazed culture today, kids all over the world idolize these heroes and try to emulate these stars," she told LifeZette. "Steph Curry understands that our society's supreme placement on wins and losses, on championships won and lost, is fleeting. Whether he wins the MVP award one year or doesn't, whether he leads his team to another championship or doesn't, he knows that all in all, these things are not where his identity lies. It's in Christ living in him."

As Steph Curry also told the magazine, "I love that basketball gives me the opportunities to do good things for people and to point them towards the Man who died for our sins on the cross."

He added, "I know I have a place in heaven waiting for me because of Him, and that’s something no earthly prize or trophy could ever top. There’s more to me than just this jersey I wear, and that’s Christ living inside of me."

Hedrick stressed Curry's commitment to family, too, as evidenced by the way he brought his adorable young daughter, Riley, with him last year to the press conference after he was named the NBA's regular season MVP. She charmed everyone. Curry's second daughter was born last year.

"When he was growing up, he was blessed to have parents who nurtured his faith," said Hedrick. "He puts a big emphasis on family." She added that finding "a faith role model is important for kids today, whether that role model is a parent or a coach."

The Fellowship of Christian Athletes (FCA), based in Kansas City, Missouri, was founded in 1954. "When Don McClanen, our founder, saw sports heroes promoting coffee, cigarettes, cars and other things at that time, he thought, 'My gosh, why can't these heroes represent not cigarettes, but the saving grace of Jesus Christ?'" said Hedrick. "That's how our concept was born."

Branch Richey, the general manager of the Brooklyn Dodgers who broke the color barrier in baseball in 1945 by signing Jackie Robinson, was instrumental in giving early support to the organization.

In 60 years, the group has become an international ministry, with 1400 staff members and more than 40,000 volunteers in 47 countries. "We've had such blessed growth because we've stayed true to our mission through our focus on coaches, camps, campus and community."

It's clear that Steph Curry, as just one of many pro athletes of deep faith, embodies the group's four core values: integrity, serving, teamwork and excellence. As the group says on its website, "There's something more than the playing field. There's the fellowship and power that God gives... It's miraculous."

Curry fans and scores of others will be watching as he displays his skills tonight in the NBA all-star game and for the remainder of the season as well.

A Profound Journey Back to God

Gender Neutrality for the Almighty Dollar