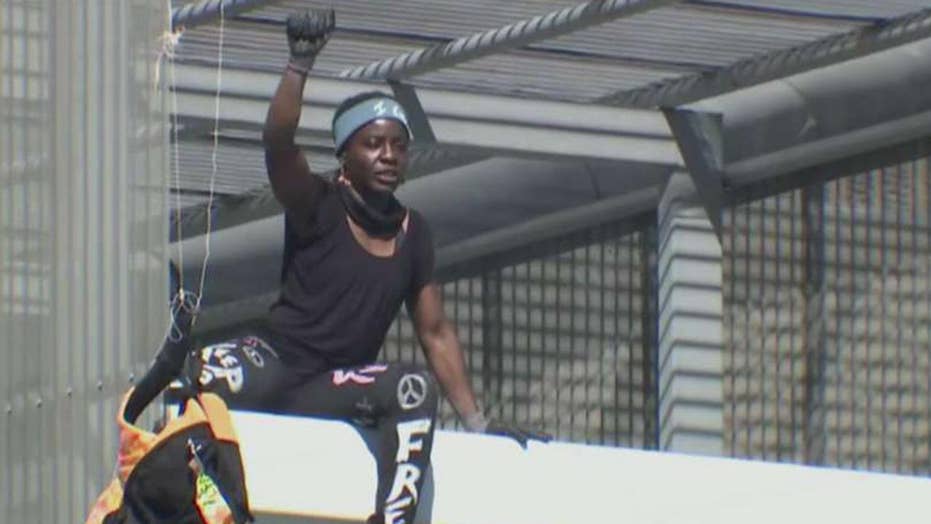 Therese Okoumou, who was convicted after scaling the Statue of Liberty on the Fourth of July, is arrested in Texas after climbing a building to unveil an 'Abolish ICE' banner.

A woman who was convicted last year after climbing the Statue of Liberty scaled a building in Texas on Wednesday as part of a protest against immigration policies.

During her protest, which included acrobatics, she was heard chanting, "Free the children - let them go," FOX7 reported.

She eventually jumped off the second floor of the building and landed on her feet, at which point she was surrounded by police. She was then taken to a hospital to be evaluated and could face trespassing charges, according to FOX7.

Okoumou's friends told KXAN-TV she spent the past few weeks planning the protest.

She posted on Facebook earlier in the day Wednesday about her plans to protest at Southwest Key.

STATUE OF LIBERTY CLIMBER SPEAKS OUTSIDE COURT, SAYS DECISION TO SCALE MONUMENT WAS 'SPUR OF THE MOMENT'

Southwest Key Programs manages a shelter in Brownsville, Texas that houses children separated from their parents after crossing into the United States illegally, according to FOX7. Originally from San Antonio, the nonprofit is now based in Austin and are in charge of dozens of shelters who house children.

Patricia Okoumou walks out of federal court from her arraignment, a day after authorities say she scaled the stone pedestal of the Statue of Liberty to protest U.S. immigration policy, in Manhattan, New York, U.S., July 5, 2018. (REUTERS/Shannon Stapleton)

In December, Okoumou was found guilty of trespassing, interfering with agency functions and disorderly conduct following the event on July 4 where she scaled the Statue of Liberty.

Immigration rights activist refused to come down from the monument for hours on July Fourth.

Okoumou "endangered herself and the NYPD and U.S. Park Police officers who rescued and apprehended her," the U.S. Attorney's office for the Southern District of New York said.

The 44-year-old is scheduled to be sentenced for that stunt on March 5. She faces up to 18 months in prison.