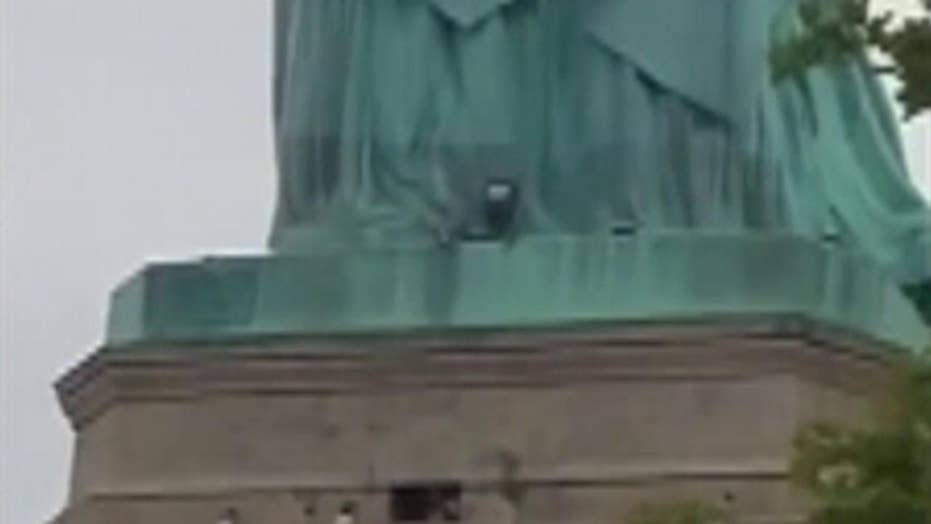 A woman who climbed the Statue of Liberty over the summer in protest of the Trump administration was found guilty Monday for the "dangerous stunt" which federal prosecutors say endangered law enforcement officers.

Therese "Patricia" Okoumou was charged with trespassing, interfering with agency functions and disorderly conduct following the event on July 4, to which she pleaded not guilty. Okoumou faces up to 18 months in prison.

STATUE OF LIBERTY CLIMBER SPEAKS OUTSIDE COURT, SAYS DECISION TO SCALE MONUMENT WAS 'SPUR OF THE MOMENT'

A native of the Democratic Republic of Congo who now lives in Staten Island, Okoumou was represented by Michael Avenatti.

Okoumou was protesting Trump's immigration policies on Independence Day when she climbed up to the base of Lady Liberty, roughly 25 feet above the monument's observation point, and refused to leave. The national park was shut down early as a precaution.

Patricia Okoumou walks out of federal court from her arraignment on July 5, a day after authorities say she scaled the stone pedestal of the Statue of Liberty to protest U.S. immigration policy. (REUTERS/Shannon Stapleton)

The woman was apprehended by two New York Police Department officers around four hours later. More than a dozen NYPD Emergency Service Unit officers were involved in the rescue.

Okoumou "endangered herself and the NYPD and U.S. Park Police officers who rescued and apprehended her," the U.S. Attorney's office for the Southern District of New York said in a statement Monday.

"The act of climbing the base of the Statue of Liberty went well beyond peaceable protest, a right we certainly respect," Attorney Geoffrey Berman said. "It was a crime that put people at grave risk."

An NYPD detective at the time said Okoumou was "basically up there saying about the children in Texas." Nearly 2,000 children were separated from their parents earlier this year after the Trump administration announced a "zero-tolerance" policy regarding immigrants who enter the U.S. illegally.

In court on Monday, Okoumou said images from the southern border with Mexico gave her nightmares, adding that she couldn't live with the sight of "children in cages."

Before she scaled the historic monument, Okoumou joined a demonstration from activist group Rise and Resist who hung a banner that read "ABOLISH ICE" from the statue's pedestal. The group said they had no idea Okoumou planned to scale the Statue of Liberty.